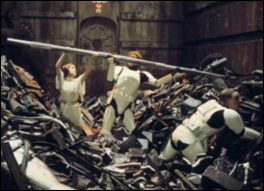 Most of the team members I am working with are young and relatively green. None had worked a Super Bowl shift before. I explained that we would be super busy until the game started, then it would get quiet, and then we would have a rush before closing for the people who stuck it out through the halftime show and then realized that they were sicker than they wanted to be and didn’t want to wait overnight.

I don’t think they believed me initially, but their worst dreams came true when we had seen nearly 60 patients in the first six hours of our shift. Influenza and strep throat were the main diagnoses, along with a smattering of strains, sprains, falls, and lacerations. As predicted, the patient flow dried up 45 minutes prior to kickoff, allowing us to catch up on the many incomplete charts that had accumulated.

I saw an interesting mix of patients, and for the first time, I had a patient who wanted to search my diagnosis on the internet right in front of me because she didn’t believe what I was telling her. I’ve had enough encounters with Dr. Google that it didn’t phase me, but she seemed surprised that what I was telling her was the same as what was on the internet. Eventually she came on board with the treatment plan, but we’ll have to see what she gives me as a rating or whether she leaves a review. I think she was expecting some other kind of care than what we deliver for her condition, but she didn’t say as much explicitly.

I much prefer when patients are clear with their expectations, and if they don’t agree with what you are proposing, that they say so. I asked my scribe for feedback and she said I seem accessible to patients and I am patient with their questions, so she’s not sure either why the encounter went the way it did. We want to empower our patients to be part of their care, but it’s difficult when there is a hidden agenda or when you don’t have all the parts of the story.

Speaking of patient engagement, I had several patients today who were trying to tell me about medications they had taken in the past and referenced their MyChart accounts. The medications were nowhere to be found, with only the current medication list displaying. The patients all said that they could see the older medications previously, which makes me wonder if the health system made a change to their display settings. The health system doesn’t include visit notes in the patient-visible record so that wasn’t an option either, and I couldn’t figure out the medication from what they described.

Regardless, it was frustrating for the patient. Trying to call the pharmacy on Super Bowl Sunday to validate a list of old medications just wasn’t going to happen. If this was the result of a software change, it would be nice for the health system to let patients know that the app would no longer display non-current medications so that they could adapt accordingly.

This is one of the core issues of interoperability. It’s not enough just to exchange the information, but if patients are to make sure of their health information, it needs to be in a format that is not only clinically useful, but understandable. Some of the things we as clinicians have learned to differentiate – such as the SNOMED-based problem list vs. the ICD-driven diagnosis list – are confusing to many non-clinical people. Information needs to maintain the original documenter’s clinical intent.

This is one of the reason I truly love the Intelligent Medical Objects solutions. They allow the clinician to document in words that they (and the patient) understand while still checking the box for the required underlying codes. Patients understand costochondritis a little better than they understand Tietze syndrome, which is just confusing. There also needs to be a way to differentiate episodic conditions that are relevant in an ongoing way (such as recurrent strep throat when parents are adding up the number of episodes that need to happen before their child’s tonsils can be removed) from episodic conditions that can often be just noise in the chart, such as occasional sinus infections, sore throats, or viral illnesses.

Some EHRs have made provisions for this. Providers can flag episodic conditions to move them from the diagnosis list to the problem list if they are pertinent, but that involves human intervention, reducing the likelihood that it will actually happen. Other EHRs require providers to retire diagnoses that aren’t ongoing, which is another step that may or may not actually occur.

Another favorite solution is Quippe from Medicomp, which allows users to highlight a finding and use it to identify encounters across the chart where related findings were documented, which is really cool. Maybe we can combine functionality like that with developing artificial intelligence solutions, marry it to a bot that will parse the chart intermittently and look for patterns that will identify what is relevant for ongoing documentation and what isn’t, and then display the data accordingly.

These kinds of solutions are what innovators should be looking for, not just creating better user interfaces for providers to mark up data. We need to be armed with great tools that look at our usage patterns and predict what we want to see next and how we want to see it. They need to understand our ordering patterns and dynamically create order sets that meet institutional rules, but that also allow us to do our work quickly and with a minimum of distraction. They need to look at how we’re prescribing and ordering and alert us if our behaviors are deviating from evidence-based best practices, especially if our organizations are scoring us against them, which many employers are. They need to be able to predict which patients are trending to higher risk and which can be managed in a more relaxed fashion, without us relying on potentially biased clinical experience or the Han Solo-like “bad feeling” about something going on with our patient.

As for me, the halftime show is wrapping up and we have zero patients on the board, so I’m headed to grab a snack and get ready for the rush.

What’s on your innovation wish list? What would really make your clinicians’ work lives better? Leave a comment or email me.