Employees estimated that the software change would create 3,000 new opioid patients and $11 million in new opioid sales. Practice Fusion told Purdue in 2016 that the program was working in shifting prescriptions to the drug company’s long-acting opioid product. The the clinical alert fired 230 million times between July 2016 through early 2019.

The Reuters report says Practice Fusion started soliciting Purdue’s business in late 2013, before founder and CEO Ryan Howard was dismissed from the company and was replaced by a former drug sales executive. Howard has recently said on Twitter that no such activity occurred while he was in charge.

Purdue declined to comment, other than to say that it is cooperating with the Department of Justice “regarding a potential resolution of these investigations.”

Purdue filed bankruptcy in September 2019 while it tried to negotiate a settlement of up to $10 billion for its role in opioid addiction. The company sold at least $35 billion worth of OxyContin, with $12 billion of that flowing to the company’s owners, the Sackler family.

Allscripts will pay $145 million to settle charges that Practice Fusion – which it acquired for $100 million in January 2018, a fraction of its previously estimated value — accepted drug company kickbacks from 14 such deals and also obtained EHR certification fraudulently.

From Doncha Know: “Re: healthcare IT M&A. You once published a very helpful flowchart. Would love to see a current view if you are still maintaining.” Constantine Davides, MBA (now managing director at Westwicke) created the “HCIT Family Tree” worksheet, but he hasn’t updated it since 2015 as far as I know. Vince also did something similar in his excellent HIS-tory series, but it’s also not quite current.

From Tolkien: “Re: Stanson Health founder Scott Weingarten. He seems to have left Cedars-Sinai.” I don’t have his contact information to ask, but his LinkedIn shows he left his Cedars SVP/chief clinical transformation officer position in December 2018, which is odd since he’s still listed on the health system’s website as holding that role. He remains CEO of Stanson Health, now owned by Premier.

Monday set a recent record for HIStalk at 10,559 page views in 8,400 unique visits, as folks followed the interoperability and Practice Fusion news. I’ve had only four busier days in HIStalk history, three of which barely passed Monday’s total (the DoD announcement day in 2015 was an outlier that crashed my server):

Reminder to HIStalk sponsors: fill out this form and I’ll include you in my HIMSS20 guide, which will include booth details and anything special you are doing or giving away. Attending but not exhibiting? It’s even more important to fill out the form since we will let readers know how to contact you at the conference. 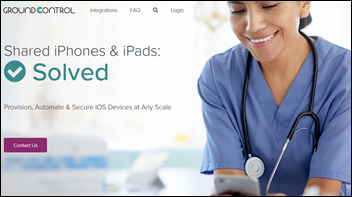 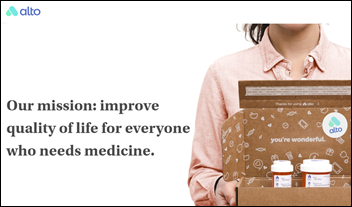 Silicon Valley prescription technology and delivery vendor Alto reportedly raises $250 million at a valuation of over $1 billion. The company operates only in San Francisco, Los Angeles, and Orange County, CA. The two co-founders – ages 26 and 27 – are former software engineers with no healthcare experience. 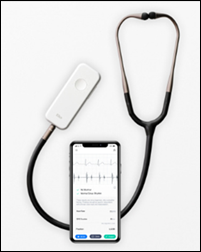 Eko gains FDA clearance for several algorithms that, when paired with its digital stethoscopes, will enable providers to more effectively screen for heart murmurs and atrial fibrillation.

Nuance works with documentation and coding company ZHealth to develop computer-assisted physician documentation capabilities for cardiologists, particularly in the area of catheterization. 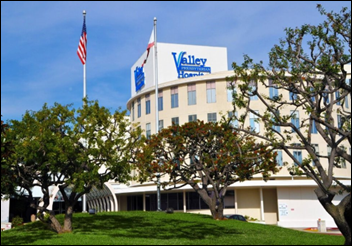 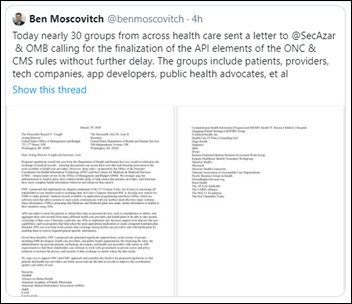 Healthcare stakeholders including AMIA, Microsoft, AAFP, Apple, and IBM (and zero EHR vendors) send a letter to HHS and the Office of Management and Budget indicating their support for the proposed interoperability rule, and requesting that it be finalized as soon as possible.

Echoing remarks made by HHS Secretary Alex Azar earlier this week, CMS Administrator Seema Verma says that “bad actors” in the private sector will not have their way when it comes to shutting down interoperability efforts:

It’s important to understand that the disingenuous efforts by certain private actors to use privacy – vital as it is – as a pretext for holding patient data hostage is an embarrassment to the industry … I want to extend that point to the entire industry: the sort of consumer-oriented revolution that will make the healthcare system more affordable and accessible is undermined by those bad actors throughout the system that continue to guard the status quo because it’s in the interest of their short-term profits. The short-sightedness of such efforts is deeply troubling, considering broad frustration with the status quo is the fuel that drives calls for the destruction of the entire private healthcare system. This self-serving mentality must be immediately and permanently retired. The problems of affordability in the health care system are too dire for the American patient to wait any longer. 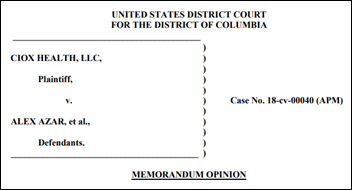 A federal judge rules that HHS-imposed limits on the fees that providers can charge for providing copies of patient records do not apply when those records are sent to a third party, such as life insurers and law firms. Records release vendor Ciox Health sued the federal government in 2018, arguing that HHS did not have the authority to expand the fee caps that were intended to limit provider charges for patients to obtain copies of their own records.

The Government Accountability Office denies Nuance’s protest of the VA’s $10 billion Cerner contract, which included encoding and clinical documentation improvement that Nuance said should have been bid out separately. Nuance, which is the VA’s incumbent vendor, said an unnamed VA contact told it that the coding and CDI work would be bid as a separate contract, a complaint the GAO found to be unfounded since Nuance tried for months to get Cerner to choose it as a subcontractor and filed its protest only after Cerner declined to do so. 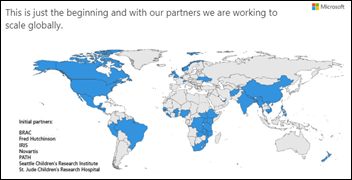 Microsoft will devote $40 million to its AI for Health Initiative, a five-year project that will use artificial intelligence to help partner organizations study, prevent, and treat diseases; prepare for and protect against future pandemics; and reduce healthcare inequities.

Weird News Andy terms this article re-volting. In Germany, an IT worker is charged with 13 cases of attempted murder for convincing women and underage girls to apply electrical shocks to their heads while he watched them on Skype. Police think the man, who told the women he was running a pain management study for which they would be paid, received sexual gratification from watching the video sessions.