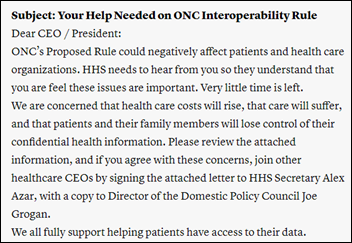 Citing patient privacy concerns, Epic CEO Judy Faulkner urges leaders at some of the company’s largest hospital customers to sign a letter to HHS Secretary Alex Azar protesting the proposed interoperability rule published last year. Faulkner emphasizes the urgency with which the letter must be signed, saying there’s “[v]ery little time” and that the final rule may be published the first week of February.

The timing of the letter is odd, given that the proposed rule, which seeks to prevent information-blocking and give patients easier access to their data, was published early last year. Perhaps the company is trying to take advantage of decision-makers and media convening at ONC’s annual meeting in Washington, DC, which kicks off in a few days. 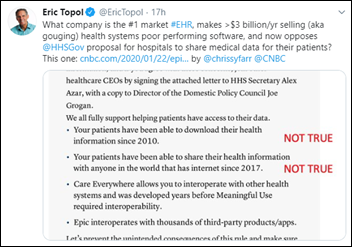 From Tom Jackson: “Re: Epic’s info-blocking. Think about it – the big 2-3 EHR vendors are going to use the ‘security’ (fear/doubt) angle for ever to try and keep the oligopoly and ‘money printer’ they have today. This is a very expected play. They also know the architecture of what they’ve built is archaic and if the market opens up, apps/innovation will take over the provider and even patient user experience pretty rapidly. Just do a google search and look at the 1990s user interfaces that the big 2-3 still use today! Btw, the gigabytes of data we voluntarily expose each day is significantly more than the amount of healthcare data we obsessively try and protect.”

Cerner VP of Strategic Growth Amanda Adkins steps down to focus on her campaign for the 3rd congressional district in Kansas. 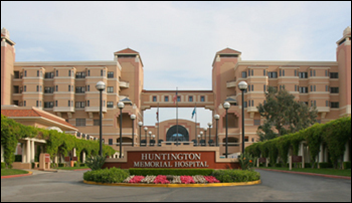 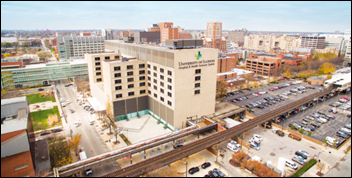 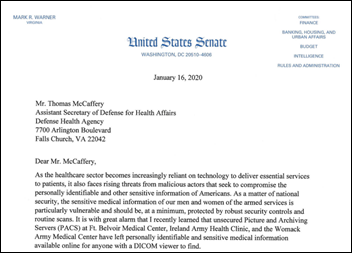 Senator Mark Warner (D-VA) calls on the Defense Health Agency to look into lax data practices at three Army facilities that have left the medical images of over 9,000 military patients exposed online. German cybersecurity experts discovered the unsecured PACS last year. DHA CIO Patrick Flanders believes the images were stored on servers belonging to private companies doing business with the DoD: “What’s happened is DoD has either shared its data with a commercial entity that failed to follow security procedures or individual patients have gone to hospitals and gotten their record … when you are referred to private practice … you go get it, and it’s uploaded into the commercial world and it’s susceptible.” 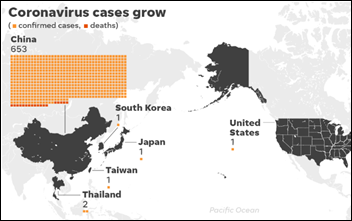 China suspends transportation in and out of three cities in an effort to contain the coronavirus, which has infected more than 500 people and killed 17. One US citizen in Washington has been diagnosed with the virus so far, prompting his caregivers at Providence Health & Services to add travel and screening alerts to their Epic system. NYC Health + Hospitals is making similar adjustments to its Epic EHR in anticipation of travelers arriving for Chinese New Year celebrations. 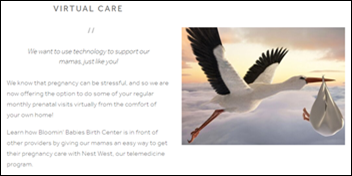 Bloomin’ Babies Birth Center in Colorado pilots the Mayo Clinic’s Nest West virtual care program, which offers expectant mothers the option of having four to seven of the typical 12 to 14 prenatal appointments virtually. Patients take readings at home using borrowed tools like digital blood pressure cuffs and bathroom scales, and then share those readings with nurses via telemedicine software provided by Doxy.Me. Birth Center staff have high hopes for the virtual visits, given that 14% of their patients drive over an hour – sometimes in harsh winter conditions – to make their appointments.