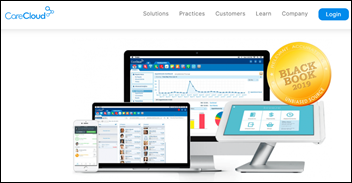 Ambulatory health IT and RCM vendor MTBC acquires Miami-based competitor CareCloud for $17 million in cash and $41 million in total consideration, according to SEC filings.

The company, which will operate as an MTBC subsidiary, was once valued at $150 million. 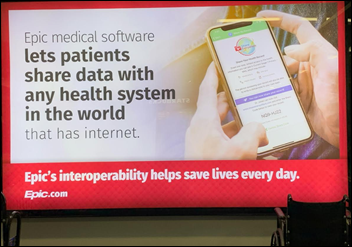 From Many Miler: “Re: Dulles airport. Saw this – I’ve never seen an Epic ad board outside of a HIMSS context.” Maybe for ONC’s annual meeting January 27-28?

From Debtor: “Re: CareCloud. $153 million invested, sold for $17 million. Whatever is left of the Meaningful Use bubble has officially burst.” Agreed. Many of us predicted an irrationally exuberant boom as taxpayer dollars were used to bribe providers to buy the same old EHRs they didn’t want when it was their own money (OK, technically they didn’t have to buy anything but simply use an EHR meaningfully, but pre-stimulus EHRs were uncommon in practices). Fast forward: the MU gold rush has ended, everybody has chosen their EHR dance partner, Epic keeps broadening its product line in squashing niche system vendors, and much of the consulting demand is either shifting or drying up as health systems snap up other hospitals and practices and reduce the potential customer base. Still, the market will always reward technology and consulting vendors that can reduce their costs, improve their outcomes, or enhance their profits at the expense of competitors – it just probably won’t be all the same vendors and the prospects will be larger but more cautious, especially if their margins slip. CareCloud’s annual revenue was reported as $25-30 million recently, so the discounted sale price surely reflected losses, debt,or diminishing prospects that were discovered in the kimono-opening process. Even PracticeFusion managed to find a $100 million buyer in Allscripts two years ago, and while that was way down from the original $250 million offer from Allscripts, the discount probably priced in fears of fraud charges against PracticeFusion over EHR certification, which turned out to be justified given the $145 million Allscripts had to pay the federal government in settlement charges just 18 months later.

From Six Degrees of Medicine: “Re: MD degree. Strange how some people claim they earned one from a school that doesn’t offer it.” I’ve known some informatics folks who feel it’s OK to claim they earned an MD degree when in fact they graduated from foreign medicals schools who instead confer only the equivalent MBChB or MBBS. Equivalent or not, it’s squirmy territory when someone’s official credentials claim a different degree than the one on their diploma to avoid explaining that they are a real doctor, just not an MD. Unrelated, but on my mind – I’m not a fan of padding a resume with ABD (All But Dissertation), in which the failed PhD seeker creates their own trophy in the absence of actually earning one.

From Dr. Y2K: “Re: Philips Holter monitors. Are down and unusable due to a date problem with 2020.” Unverified. 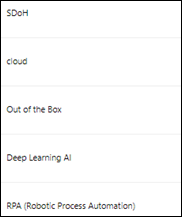 Thanks for the HISsies nominations I’ve received so far. Who from the industry would you like to have a few beers with versus whose face would be on the receiving end of a pie if you were to launch one? I’ll give the nominations a few more more days and then create the voting ballot from the results. Nominate yourself if you want – you never know.

I had a teeth-cleaning appointment today and had two impressions: (a) the practice’s large, lit sign in the parking lot listed “Today’s Hours,” which cleverly might encourage drivers-by to stop in; (c) the waiting room’s sound system was playing Def Leppard’s “Pour Some Sugar On Me,” which might be a subtle effort to drum up more long-term business. That song came out 33 years ago, which means it will be playing in nursing homes in maybe 10-15 years.

Listening: Midnight Oil, which seems presciently appropriate since the “beds are burning” in their home country even though that’s not what the song was about. Singer-activist-conservationist Peter Garrett, who is 66, left The Oils to serve in government roles. His thoughts on the fires in Australia are as direct and angry as in “Beds Are Burning.”

Kyruus raises $42 million in a Series D funding round, increasing its total to $125 million. 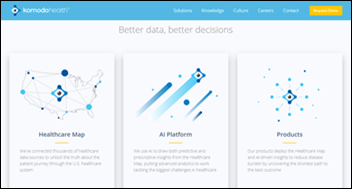 Analytics company Komodo Health will use a $50 million investment to develop new software and expand its Healthcare Map, which uses de-identified patient data from Allscripts to offer a real-time view of 15 million daily patient encounters and outcomes. 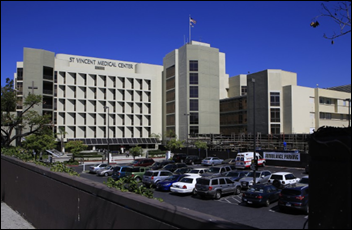 Verity Health seeks to close St. Vincent Medical Center in Los Angeles after its potential sale to a development group falls through. Health IT and newspaper mogul Patrick Soon-Shiong, MD took a controlling interest in the struggling health system, which once included six hospitals, in 2017. As an Allscripts investor, he was relatively quick to implement Sunrise system-wide. Verity declared bankruptcy a year later.

I missed this last week: Premier is reportedly postponing its efforts to sell itself for six months so it can poll its health system shareholders on whether they plan to roll their equity to a new owner or to cash out, an intention of much interest to prospective acquirers. 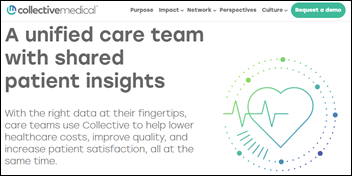 Collective Medical announces the national rollout of a free enhancement to its real-time notification and care collaboration platform that identifies patients with a history of sepsis for quick intervention, citing a JAMA-published study in which 43% of severe sepsis survivors were re-hospitalized within 90 days. 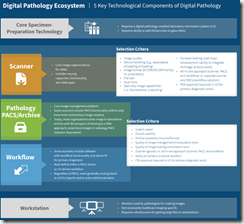 A KLAS report on replacing glass pathology slides with digital pathology for primary diagnosis finds that the new technology might not be less expensive, but it provides insurance against predicted pathologist shortages in supporting remote work. Philips is the early leader and the first vendor to earn FDA approval, while Sectra is positioned to play a significant role. KLAS lays out the technology components as:

EHNAC publishes new criteria versions for all 18 of its interoperability accreditation programs that took effect January 1. 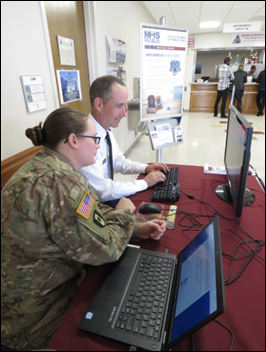 DoD officials deem the second wave of MHS Genesis deployments a success after implementing the Cerner-based software at four bases last fall. Major infrastructure improvements and new training strategies, including a peer-expert system, helped to ensure smoother implementations than experienced in the first wave of go lives at facilities in the Pacific Northwest in late 2017. Twenty-five additional facilities will go live in June. 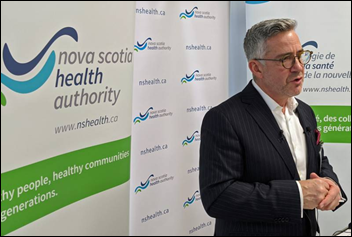 In Canada, the Nova Scotia Health Authority hires former Vancouver Island Health CEO Brendan Carr, MD to fulfill a similar role. Carr oversaw the contentious rollout of Cerner software at Island facilities between 2016 and 2017 and will manage a similar project in Nova Scotia, which has yet to decide between technology from Cerner and Allscripts. The project, which Carr says has been in the works for years, has been marred by allegations of bias from Evident and grumblings from other higher-profile vendors.

Microsoft’s support of Windows 7 will end on January 14, leaving some significant number of hospital and practice users without security updates. I’ll say this from my own experience – Windows 10 is magnificent, in comparison or otherwise. 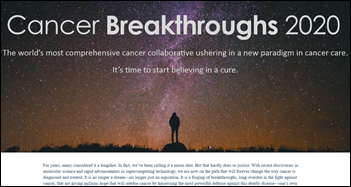 STAT finds little to show from billionaire Patrick Soon-Shiong, MD’s promise in 2016 that his Cancer MoonShot 2020 program would enroll thousands of people in clinical trials and develop a cancer vaccine. The project’s website has been taken down, social media accounts have been dormant for years, and a hacker is using its Twitter account for spamming. A USC oncologist says “it’s almost a slap in the face” to cancer patients when someone of Soon-Shiong’s wealth and influence promises hope, but then fails to deliver. All of the 17 leaders who were quoted in the initial PR splash refuse to comment. Soon-Shiong’s Nant companies, including NantHealth, have floundered as well after high-profile IPOs. 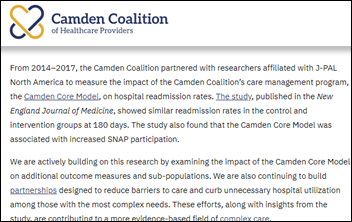 The much-ballyhooed “hotspotting” project of Camden Coalition of Healthcare Providers – in which healthcare super-utilizers were given more aggressive care with a claimed huge reduction in their hospital readmissions, which seemed reasonable – fails to pass a randomized controlled trial, with no change in readmissions. The Coalition was honest and brave in questioning their own work early on and then allowing it to be studied afterward (imagine if a big drug or tech company was running the research). Three thoughts: (a) regression to the mean is real in everything from medicine to sophomore record albums, where a crazily successful initial measurement evens itself out with repeated measurement; (b) maybe hospital readmission rate is a poor measure of clinical success even though the government fixates on it in imposing payment penalties – it is highly unlikely that those interventions had no effect; and (c) the simplistic idea that an app, program, or policy change can quickly convert frequent flyers unfortunately underestimates the complexity of the challenge. And maybe a fourth one — we picture those frequent flyers as an unchanging group of patients when maybe they actually are high utilizers for a short time, then other patients with acute needs (which maybe more social than medical) trade places with them. OK, maybe even a fifth one – health is not influenced as much by healthcare as the people who are well paid to render healthcare services would like you to believe. 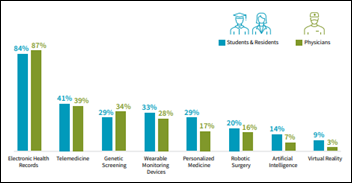 AI expert Alexander Scarlat, MD sent this article that describes how sophisticated bots are poisoning public discourse. Example: a Harvard student used one to create 1,000 comments in response to draft Medicaid legislation and they were so realistic that the government accepted them as genuine concerns from the public. The student, unlike more nefarious players, told Medicaid about his experiment so they could remove the comments before they influenced policy. An FCC comment period drew 22 million comments, of which maybe half were fake in using stolen identities and at least 1.3 million used the same recognizable template. 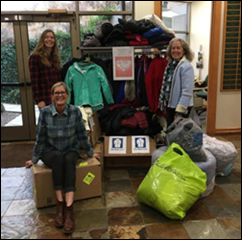