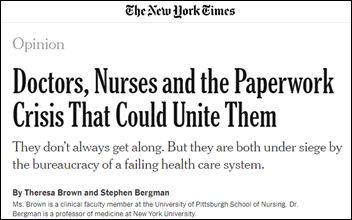 Professors of nursing and medicine write in a New York Times opinion piece that the professions should overcome their traditional hostility toward each other and unite in protesting the excessive documentation required by billing and regulatory requirements that are enforced via the EHR.

The authors recommend that hospitals regularly review their EHR setup to strip away requirements that are not related to patient care.

They also observe that while doctors make more money and are often dismissive of nurses, the latter have done a better job of supporting unions.

The piece concludes by saying that doctors and nurses want the best for patients, but are prevented from delivering it because of “profiteering and gross inefficiency.”

From Moon Shot: “Re: sponsors. I used Internet Wayback to compare your sponsor list three years ago to today. I’m surprised at those that have disappeared for reasons other than being acquired.” I never though of using Internet Wayback for that, but it does indeed work. The end of the Meaningful Use-fueled buying frenzy has caused quite a few companies to scale back in various ways that I assume aren’t limited to HIStalk sponsorship. Several sponsors tell us they are cutting back or don’t have any senior people remaining in marketing or other departments. I expect that trend to continue and I predict that the HIMSS conference exhibit hall will be more Spartan than in the gold rush years. We will find out if companies can downsize their way to competitive success, but in any case, I appreciate those companies that keep HIStalk running and the readers who keep coming back in numbers that haven’t diminished.

From Corporate Brand Expert: “Re: our company name. You omitted our trademark designation – please fix.” Companies use trademark symbols in their own communications. Third parties and journalists, except for the clueless ones, do not.

From Robert D. Lafsky, MD: “Re: New York Times opinion piece on EHRs. How did paperless systems become ‘paperwork?’” Dr. Lafsky — the only grammarian I know who is even less forgiving than I – correctly notes that the Times article’s headline refers to performing low-value EHR activities as “paperwork.” I blame the headline writer of the “paper” (pun intended) since the authors don’t use that term in the actual article. I’m not appalled because I don’t know any word that conveys the concept better, although I am annoyed at its omission of the Oxford comma that makes the headline harder to read (no one is ever confused by its inclusion, but some are confused by its omission). 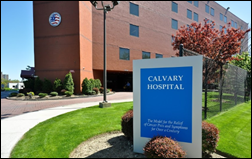 From Going Commando: “Re: Calvary Hospital (NY). Sacked the CIO and the analysts they hired after a successful Meditech Expanse rollout. Navin Haffty is now ruling the roost.” Unverified, although Kathleen Parker’s bio has been removed from the hospital’s web page. Either way, it’s always interesting to me how frequently CIOs are deposed by the vendors they manage.

From Health Tech Stocks: “Re: hospital patient survey vendor NRC Health. Shares were up 74% in 2019, valuing the company at over $1.5 billion.” Shares of NRC – headquartered in Lincoln, NE — are up nearly 400% in five years. The company was founded in 1981 by Mike Hays, who remains CEO. He holds $10 million worth after selling $300 million worth from the trust fund of his grandchildren last year.

From COBOL Been Berry Good to Me: “Re: Y2K. Thanks for that look back, which as someone involved in the remediation, made me smile.” People forget that Y2K was the ransomware of its day, a non-event only because programmers who were forced to dig into ugly, old code made it so. Anyone who thinks the issue was a made-up problem is ignorant of the facts, conveniently benefitting – as do people who refuse to be vaccinated – by the more responsible behavior of others. I think we’ll do better in fixing well in advance the Year 2038 problem, the “Unix Y2K’ in which systems that represent time as the number of seconds elapsed since January 1, 1970 will stop working when the storage variable runs out of space on January 19, 2038.

From Get Thee to Conferences: “Re: health IT conferences. I see other sites attend dozens of conferences each year. Why don’t you?” I think the lack of return is obvious given the continuingly inexpert content of those sites. Racking up exhibit hall miles is no substitute for running a hospital IT department, practicing as a clinician, performing informatics research, or all those other activities that go beneath self-important conference meet-ups and selfies. I admit that I sometimes develop useful perceptions about vendors and trends at the HIMSS conference since it covers just about everything important, but I’m not too tempted beyond that. Technology education requires cross-country flights and overpriced hotels only because that’s where the exhibit hall cash register is ringing. I always savor the irony of the American Telemedicine Association holding an-person conference in New Orleans to pitch seeing a doctor by video with the argument that those sessions are cheaper, more efficient, and more convenient.

Welcome to the new year, when the high deductibles and out-of-pocket maximum costs of many expensive health insurance plans reset, most likely giving providers a break as the patients who need their services can’t afford them.

The World Health Organization designates 2020 as the “Year of the Nurse and the Midwife” in calling for 9 million more nurses and midwives that are needed to achieve universal health coverage by 2030.

The VA awards Liberty IT Solutions a three-year, $95 million task order to integrate the VA’s Consolidated Patient Account Centers with its Cerner system, adding to the $434 million contract Liberty won in November to modernize the VA’s systems under Cerner. The company had previously won $700 million in VA IT contracts in a single quarter of 2019.

Hospital mergers and acquisitions haven’t improved quality and in some cases have made it worse, researchers find. While prices nearly always increase after a merger, quality rarely does. Sometimes the acquired hospital saw its quality scores dragged down by the lower ones of its acquirer.

An Australian insurer says doctors there appear to be choosing medical device implants based on their personal profit rather than medical evidence, to the point that sales reps are scrubbed in to advise surgeons during procedures (it’s exactly the same in the US, in case you haven’t worked in a hospital). The company recommends creating an independent organization that reviews prices and clinical efficacy similar to a program that reviews drugs, also noting that the federal government sets medical device payments for public hospitals but private hospitals pay a lot more. The medical device trade group says the campaign is a smokescreen for increasing health insurance premiums and that it’s not the government’s job to decide which products provide the most value.

In England, politicians call for the resignation of the Imperial College Healthcare Trust Chair Paula Vennells after the country’s Post Office – which she headed as CEO from 2012 through 2019 – agrees to pay $75 million in lawsuit damages to sub-postmasters who were blamed for accounting shortfalls that were actually caused by the Post Office’s Horizon computer system. Some of the sub-postmasters had been fired, fined, or imprisoned while the Post Office was spending millions defending Horizon, which the presiding lawsuit judge called “institutional obstinacy.”