My bedtime routine includes checking HIStalk for comments and doing some light Web surfing on my phone, so my attention was captured by yesterday’s JAMA article entitled “Matters of the Mind – Bedtime Procrastination, Relation-Induced Anxiety, Lonely Tweeters.” No surprise, studies linked smartphone use with bedtime procrastination. The piece also looks at how relaxation can be stressful for individuals with anxiety and depression, as well as how Twitter posts could help identify loneliness. These are areas of research many of us wouldn’t have dreamed of a decade ago. I’ve thought frequently about consumer technology (particularly smartphones) and how it’s collectively one huge experiment, albeit one without an Institutional Review Board to make sure the participants aren’t harmed. I think we’re just scratching the surface at learning what technology does (or doesn’t) do for or to us. 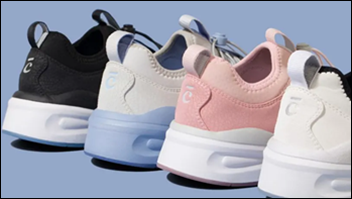 Jenn clued me in to this article about startups focusing on nurses as a target audience. There are 3.8 million nurses in the US, so it makes sense that companies would start designing around their needs. Clove is one of them, and their name is an inside joke as well – the C with a line over it is medical shorthand for “with” so their products are “with love.” The name is subtle but the medically-inspired design of its shoes aren’t – although they’re a running style, they have a solid smooth surface over the toe area which is great to protect from the spills and goo of the job. Ventilation holes are relocated to the sides, where splashes and drips are less likely.

The company is savvy in other ways, showing that they understand healthcare folks by shipping a three-pack of pens with every pair of shoes. The pens are marked “For Borrowing Only.” Anyone who keeps a spare (and usually crummy) pen in their pocket to deal with people who ask to use your pen and who are unlikely to give it back knows what I’m talking about. Nike also recently launched a healthcare shoe, but it’s not nearly as cool. I was a little put off by their unisex sizing as well as their use of the “star of life” logo most commonly used by emergency medical services. In contrast, Clove has both women’s and men’s sizing as well as color names that make clinicians smile: Grey Matter, Night Shift, and Pink Up.

Public health informatics is a big part of clinical informatics, and I was shocked to learn about a measles outbreak on Samoa, where measles is running rampant. The country has a population of around 200,000 and nearly 4,900 people have become ill with 71 dying. Similar outbreaks are also occurring in Tonga, Fiji, and American Samoa. Several of the Pacific island nations have vaccine rates below World Health Organization recommendations. There are numerous reasons for the low vaccination rates, but my thoughts go out to those who are sickened and their caretakers. Hopefully the outbreak is a brief one.

In other news, analytics folks must be cheering at the possibility that flu season could peak early this year. The Centers for Disease Control and Prevention’s FluSight Forecasting initiative gives it a 40% chance of peaking this month, as flu levels have been at or above the national baseline for several weeks. The chance it will peak in January is 30% and February is 20%. I’ve significantly reduced my clinical work for January and February because I loathe driving in icy conditions, so we’ll see if I played the odds right or not.

Intelligent Medical Objects has launched IMO Precision Sets, which are designed to allow clients to quickly define various value sets needed for quality work and value-based care. Based on IMO’s solid terminology and maintained by their dedicated clinical terminologists, they are available in various sets – Oncology, Reporting, Behavioral Health, Chronic Conditions, Perioperative, and Acute Conditions. I spent way too much time in a past life trying to maintain those groupings for reporting, through ICD codes and SNOMED codes. IMO’s original Problem IT product was the only solution I ever deployed as a CMIO where my providers proactively reached out to say thank you, so I’m a big fan of their work.

Congress is looking for feedback on a new bill nicknamed “Cures 2.0,” which is designed to go beyond the content of the original 21st Century Cures Act to address topics like digital and connected health platforms. They also plan to focus on real-world evidence in the FDA’s approval process, and to speed up coverage of FDA-approved drugs by payers. Feedback is requested by December 16 at cures2@mail.house.gov if you’re interested in sharing your thoughts.

As we approach the end of the year, it’s a time for many to reflect on the months that have passed and our hopes for the coming year. Since we work in healthcare technology, we’re not immune to the influence of various trends and fads, especially where health-related tech is concerned. Like many, I’ve had my adventures with wearable tech, startups, and various apps that proposed to make my life better. Lots of people have stories to tell about how we can live our “best lives,” from tech gurus to TV personalities. In a fit of decluttering I had my Marie Kondo moment, so I giggled when I came across this article about “The life-changing magic of making do.” I’m a frugal person (as evidenced by writing this wearing 20-year old pajamas on a 20-year old sofa, watching Netflix on a TV smaller than some computer monitors), but was shocked by some of the statistics in the article as far as sheer consumption in North America.

The piece’s comments on the lack of fixability with technology resonated with me – it’s one of the reasons I hope my geriatric washer and dryer never fully give up the ghost – I don’t need something with a motherboard to control how my clothes are cleaned. (I’ve had enough of that drama with the refrigerator to last a lifetime). I’ve rehabilitated both the washer and the dryer courtesy of Repair Clinic and its videos. (Have you ever seen inside a gas dryer? It’s pretty crazy in there.) It gives me hope for what I want to do professionally in the next year – to help healthcare organizations get the most out of the resources they’ve already paid good money for and that they might not be using to the fullest. It’s a good goal, but difficult for some organizations because it often involves hard work. It’s much easier to throw out a “problem” technology when the real problem is the people or processes that govern its use. We’ll see how that plays in the New Year.

What are your reflections on the past year and hopes for the coming one? Leave a comment or email me.