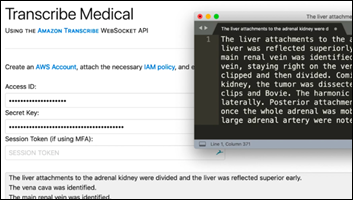 Amazon Web Services announces the rollout of Amazon Transcribe Medical, a real-time transcription tool that software developers can use to transcribe speech and then send the resulting text to EHRs and other AWS tools such as the Amazon Comprehend Medical language service.

The company is positioning service as a replacement for transcriptionists, scribes, and transcription software.

It’s a “service” only in the technical sense – despite some sites misinterpreting it as a standalone product, it isn’t. Developers will need to build it into their own products and AWS will charge for usage.

From Curious: “Re: Meditech. I’ll l be interested to see if MaaS + Expanse can make Meditech competitive with CPSI, which owns the community and price-sensitive hospital market because they do the billing for their clients. Meditech should get into outsourced billing. The margin isn’t great, but they need it to gain new customers. However, no one who works for Meditech in Boston is going to say it since the people who would be hired to do billing aren’t going to work in Boston.”

I’m finding that reading Samuel Shem’s “Man’s 4th-Best Hospital” is more of a chore than I anticipated, which is surprising given how much I liked “House of God” (this one is long and heavy-handed with simplistic cynicism), but I’ll probably finish it despite its tiring anti-EHR diatribes. Meanwhile, I’ve purchased Elizabeth Rosenthal’s “An American Sickness,” which I’ve somehow managed not to read since it came out in 2017. 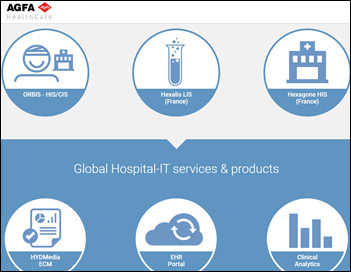 Agfa is negotiating the sale of its Europe-focused healthcare and imaging IT business to Italy-based clinical software vendor Dedalus for more than $1 billion, excluding expected frontrunner CompuGroup Medical. The business includes enterprise imaging, hospital information systems, an enterprise content management solution, and patient engagement tools. It looks like a done deal since the companies have already said they expect it to close in Q2 2020. The business generates around $200 million in annual revenue, so that’s a pretty rich multiple for a company to pay to acquire a slightly larger competitor.

Cerner names Amazon Web Services as its preferred cloud, AI, and machine learning provider. You aren’t having déjà vu – Cerner named AWS as its preferred cloud provider in July 2019, so this announcement adds the obvious AI and ML components that will be incorporated into the Cerner Machine Learning Ecosystem for creating and deploying machine learning models. AWS called Cerner a “healthcare and life sciences organization” in the announcement rather than a software vendor, which I guess is slightly accurate since a microscopic part of its business involves running a few workplace clinics. As far as I know, its life sciences work is limited to selling patient EHR data to drug companies.

Allscripts launches a $200 million private offering of convertible senior notes in a transaction that is far too complex for me to understand.

An investigative report finds that Amazon’s on-site medical unit contractor Amcare is failing to send injured warehouse employees to outside care providers when needed and is also, per OHSA inspections, using unsupervised EMTs and athletic trainers outside of their allowed scope of their practice. Amcare is authorized to render first aid using EMTs, but OSHA’s investigation of employee complaints found evidence that employees are being refused treatment and their injuries are not always reported per federal law.

Heritage Valley Health System (PA) files suit against Nuance for failing to prevent the 2017 malware attack that the lawsuit claims spread from Nuance to the health system, taking down its computer and biomedical systems.

KLAS looks at PACS outside the US, noting that in Europe, Sectra and lesser-known regional vendors are tops at meeting customer expectations; Philips and Agfa are seen as best positioned to address future needs; and Change Healthcare, Fujifilm, GE Healthcare, Philips, and Cerner are frustrating customers with their lack of development. Philips has taken the lead in Canada with the decline of Intelerad and Change Healthcare, while Intelerad and Philips lead performance in Asia and Oceania although satisfaction scores in that region are lower and customers complain about poor vendor support. KLAS concludes that some market leaders are lagging as the market is demanding cloud technology and lighter infrastructure over client-server PACS. 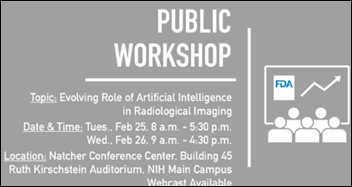 FDA will hold a public workshop on the use of AI in radiological imaging February 25-26 on the NIH campus in Bethesda, MD that will also cover potential FDA regulation. A post-event webcast will be available. 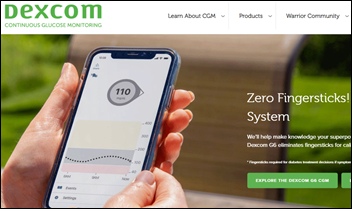 Dexcom confirms that its G6 continuous glucose monitor hasn’t sent results and alerts – most of them intended for the parents of children with diabetes who are managing their conditions – since Friday due to a server overload problem. The company, which didn’t notify users until a Saturday morning Facebook post, experienced a similar one-day outage a year ago. Dexcom’s most recent Facebook update, from Monday, says they are back to “near normal performance.” Users complained that the company didn’t issue alerts by other channels such as text message or even its webpage for customers who don’t use social media and didn’t update its support line with a notice that they were experiencing issues, forcing callers to remain on hold for long periods. Shares of the publicly traded company, which has $1 billion in annual revenue, dropped a few percentage points at Monday’s market open but have since rebounded. 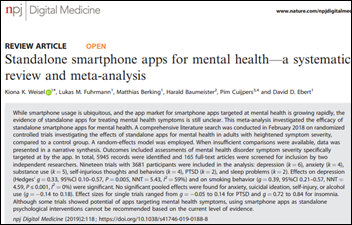 Researchers find that the few mental health smartphone apps that have actually undergone clinical trials – 19 trials versus the hundreds of available apps whose efficacy hasn’t been measured — are not effective when used alone. Apps for depression, anxiety, substance use, self-injurious thoughts, sleep problems, depression, alcohol, and smoking aren’t as effective as web-based interventions, possibly because the apps aren’t used as often, interventions might be less effective due to the casual and impromptu nature of smartphone use, and the form factor does not allow simply translating proven, on-site psychotherapy processes to the screen as has been done with web-based apps. The authors warn that ineffective apps may discourage users from seeking interventions that actually work. They recommend that phone apps be designed to take advantage of that platform’s unique capabilities for context sensing, always-on access, prompting, and the ability to perform physiological assessments.

A researcher’s review of anonymized electronic patient records of cardiac arrest patients who were transported by ambulance to Lifespan Health System (RI) finds that at least 11 patients over 2 1/2 years had misplaced breathing tubes, all of whom died. Rhode Island is one of few states that does not limit ET tube placement to paramedics, but a firefighter’s union killed a proposal to bring the state in line with others, declaring to audience applause in a public meeting, “We’re the experts, not doctors who are doing it when they’re in nice ORs or nice ERs with bright lights and a lot of people helping them.” A misplaced ET tube is considered to be a “never event” in emergency medicine since placement can and should be confirmed. Ambulance services, like hospitals, are required to report such mistakes to the state’s health department, but they would be aware of issues only of the hospital notifies them after the fact. 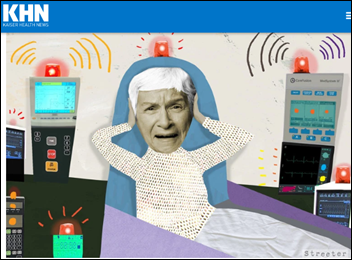 Kaiser Health News looks at rarely useful interruptive medical monitoring alarms, whose most frequent outcome is disturbing patient rest and burning out clinicians who are forced to listen to their insistent clanging all day long. Joint Commission says 85% to 99% of the alarms don’t require clinical intervention. Bed alarm sales jumped in 2008 when CMS decided to stop paying for hospital fall injuries even as CMS later discouraged their use in nursing homes in considering them a “restraint” as residents remained bedridden to keep the alarms quiet. The article observes that alarm proliferation has created a market for clinical alarm management consultants and software vendors who review alarm-capable device settings and install software that reviews the alerts before notifying employees.

HIMSS will “curate” (there’s a trendy millennial word for you) 12-15 digital health startups to pitch investors at the J. P. Morgan Healthcare Conference via its Health 2.0 acquisition, which seemed more appropriate when Health 2.0 was a for-profit company instead of having the non-profit HIMSS choose which companies get in front of potential investors. FYI to HIMSS – it will be 2020 soon, so please fix that date. Also note that the socialism-despising sharks at J.P. Morgan Chase who oversee this investor orgy happily received $25 billion of your tax dollars stay afloat back in 2008, although they had to pay $13 billion for ignoring their own due diligence process in screwing around with mortgage-backed securities. Both numbers are chicken feed to a company whose annual profits are tracking at around $50 billion. Greed is good, at least for the company’s bottom line and for CEO Jamie Dimon, whose net worth is around $2 billion. 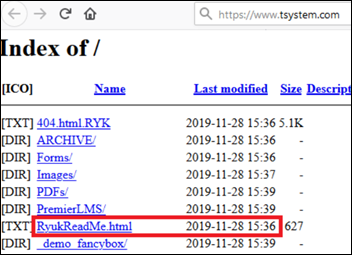 The systems of urgent care software vendor T-System are apparently offline, as reported by malware hunters who found evidence of a ransomware attack on its servers. The company’s PR contact didn’t respond to my inquiry and any problems have not been publicly acknowledged, but the company’s website has been down since at least Friday when we last checked. UPDATE: a T-System spokesperson provided this response:

Through proactive monitoring of our systems, last week T-System identified a cybersecurity incident that has temporarily affected the availability of our Advanced Coding System (ACS) services. After learning of the incident, we promptly took relevant systems offline and commenced an investigation with the assistance of external experts who have expertise in the specific type of malware involved in the incident. Over the past few days, we have been working with our internal team and the external experts to restore backups and move back into production the systems that we initially took offline. We are working closely to restore these systems as quickly and safely as possible. Because of our early detection of the incident and our architecture, we do not – at this time – expect the incident to impact unsecured PHI or other personal information. We have been in direct contact with our clients with updates about the incident. The investigation is ongoing.

In Australia, a cancer center’s six-month, small-scale trial of IBM Watson for matching patients to available clinical trials worked well, but the cancer center won’t move ahead pending product improvements and its own EHR implementation. 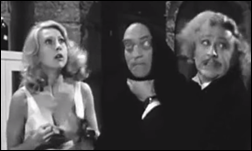 Weird News Andy channels “Young Frankenstein” in titling this story Abby Normal. A Duke Health surgeon successfully completes the first transplant of a dead donor’s heart into a live patient, a procedure that has been performed for 10 years in the UK and in 619 procedures in last year alone in expanding the potential donor pool. WNA notes that equivalent US numbers would be nearly all of the 3,400 US heart transplants that were performed last year.