Many EHR aficionados view discrete data as the holy grail of information, but a recent article in the Journal of the American Medical Informatics Association looked specifically at data from unstructured clinical notes. The authors found that such “real world data” was more accurate for use with algorithms to predict coronary artery disease when compared to structured data.

The study looked at data from a six-year time span, gathering a specified set of clinical concepts through structured data gathered from standard query techniques as well as AI-driven analysis of unstructured data. The authors used data from over 10,000 clinical notes and looked at language around existing coronary artery disease, diabetes, and other clinical predictors of coronary artery disease. Food for thought for all those folks who are uncertain about the role that narrative documentation may continue to play as we move forward.

I was glad to see a recent ONC blog that noted that nearly one-third of hospitals can access prescription drug monitoring program (PDMP) data from within the EHR. However, it seems like that number should be much higher if we really want to move the needle on inappropriate prescribing of opioids. If providers aren’t viewing data from within the EHR, that means they have to access a separate system, which in itself adds a barrier to use. The piece didn’t mention rates of integration for ambulatory EHRs, which is where a lot of opioid prescribing happens.

Nearly all states have PDMP registries, with only Missouri lagging behind. (Interestingly, that state was one of the last to have a statewide immunization registry, which makes it look a bit like public health isn’t a priority for the legislators.)  I rarely prescribe opioids, and when I do, it’s usually for 10 or fewer pills, but I still access the PDMP whenever my suspicions are raised about a particular patient. Usually the PDMP confirms my impression, leading to a very direct conversation with the patient.

This hit my radar at the same time as a communication from the American Academy of Family Physicians about its recent vaccine-themed letter to the US Department of Health and Human Services. The letter urges that EHR vendors not create financial burdens for physicians trying to connect to state immunization registries and called on HHS to “hold information technology vendors accountable for creating a national standardized, easily accessible, accurate, robust immunization information system.” It also called for universal payments for vaccinations, which makes sense after my recent experience which I’ll call “A Tale of Two Vaccines.”

One member of my family received their vaccination at their primary physician office. The explanation of benefits statement lists a charge, an adjustment, a payment to the physician, and a patient responsibility of zero since the entire amount was applied to “well care.” I received my vaccination at my clinical employer. Although it’s required as a condition of employment, they bill it to insurance and then absorb any non-covered portion. My explanation of benefits lists a charge, an adjustment, and no payment to the physician since the place of service was “urgent care” and the entire amount was applied to my deductible. If I hadn’t been an employee, I would have paid the entire cost.

Insurance companies should either pay for a vaccine or not, regardless of the place of service, as long as the same CPT codes are being used for billing. Hundreds of patients receive their vaccines from my clinic because we’re fast, friendly, and accessible. I hope they’re not receiving the same rude billing surprises that I did. 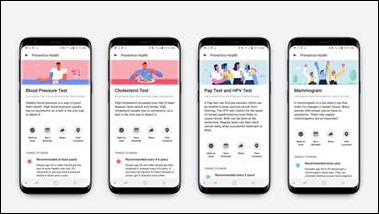 I’m skeptical about a new Facebook Preventive Health tool that is supposed to help empower people to seek out vaccines and other preventive services. They plan to use age and gender to identify target populations. My first concern at reading that is that perhaps they don’t understand the difference between sex and gender and how those contribute to the equation. Hopefully that was a lapse on the reporter’s part, since the official Facebook web page notes age and sex as the demographics it’s monitoring.

The official page also notes that it is referring patients to Federally Qualified Health Centers with its “find locations near me” for patients to get checkups and to the HealthMap Vaccine Finder for vaccines. It goes on to say that it “doesn’t verify locations on these lists and the lists may have inaccuracies.”

The feature is available only on the mobile Facebook app and doesn’t give specific sources for all of its recommendations. It did say that a mammogram was recommended for my age and sex and it should be yearly, citing the American Cancer Society as the source. There was no readily visible source for flu vaccination, blood pressure testing, diabetes screening, cholesterol screening, or cervical cancer screening, although they could be found by selecting a details arrow.

It also recommended I have an annual stool blood test for colorectal cancer screening, which is not in harmony with the US Preventive Services Task Force recommendations for my sub-50 age group. It went on to say that “test kits are free with most insurance plans” and I can guarantee that it is not free with my insurance, which covers only what is recommended by the USPSFT. The American Cancer Society (which Facebook cites as its colorectal cancer screening reference) even says clearly that insurers are not required to cover screening for individuals under 50 years of age. Those kinds of discussions will not be enjoyed by physicians when patients roll in with “authoritative” information from Facebook.

The Federal Communications Commission’s Intergovernmental Advisory Committee issued a recommendation last week regarding “State, Local, Tribal, and Territorial Regulatory and Other Barriers and Incentives to Telemedicine.” Not surprisingly, the major issues they cite include broadband access and a patchwork of laws and regulations that impede adoption. Looking at the broadband issue, redundancy is an issue for facility-based telehealth programs.

The report recommends that live video with appropriate image and audio quality be available so providers can accurately assess patients, adding that access to the full patient chart is desirable. They didn’t give much attention to consumer-facing telehealth. They note six policy areas where work needs to happen from a regulatory perspective: reimbursement, licensing, health information exchanges, insurance parity and malpractice overage, privacy-information sharing and HIPAA, and also being able to establish a doctor-patient relationship based on telehealth.