Deleting your Facebook account does not actually stop any tracking. All your web activity is still tracked via pixels and linked back to your deactivated FB account (example: I still would know you are a 40 year old woman with two kids over 8 who lives in a specific zip code and has certain interests from your old FB activity). I can still target ads to you through websites who publish ads through Facebook, “audience network.” (FB Marketer)

How can the responses of 6-7 customers out of thousands [in KLAS’s global VNA report] be classed as “global” insight and customer feedback? (PluckyBrit)

Why so cynical re: HLTH? I’m here now, and am finding it refreshingly relevant compared to HIMSS or Beckers. For goodness sake, the keynote presentations actually focused on current issues, and didn’t just include big name politicians, sports stars, or actors. Sure, there’s glitz, and the caricatures, etc., but for conferences, I’ve found it to have more of a “finger on the pulse of what’s coming” than any other major conference out there. (CynicAl)

Banner Health bought the University of Arizona’s medical arm and transitioned them from Epic to Cerner. It’s the reason Epic had to change their spiel to “no *voluntary* deinstalls.” (Math)

I don’t think [EHR training driving provider satisfaction and adoption] has been a big secret to those who have gone through the implementation cycle multiple times, yet it’s always the first thing in the budget to get cut. You’d think that the vendors would be more prescriptive (as opposed to “advisory”) when detailing training requirements during planning. Or maybe it’s a failure of CIOs to make the case to CMOs, CFOs and CEOs that they’re being penny wise and pound foolish. Maybe this KLAS survey will help. (Recovering CIO) 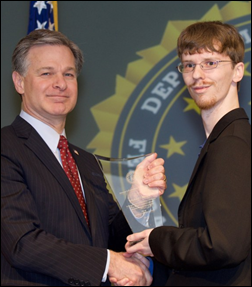 ProPublica profiles 27-year-old Nerds on Call computer technician Michael Gillespie (guess which one is him in the photo above, as he receives an FBI award), who has cracked 100 forms of ransomware and provides free decryption tools that have saved hundreds of millions of dollars worth of avoided ransom payments. He receives 2,000 files per day from panicked computer users asking for help and spends his evenings on his couch surrounded by his cats, decrypting new strains and corresponding with people who are seeking his assistance. There’s a healthcare connection – he and his wife are broke because of the after-insurance costs of treating her newly discovered bladder cancer, which forced him to take a 2 a.m. paper route, surrender their car to the bank, and overcome threats of foreclosure of their $116,000 house in Normal, Illinois. Pestered by relatives who can’t understand why he helps people for free, Gillespie says, “There’s a time in every IT person’s career where they think, I’m on the wrong side. You start seeing the dollar amounts that are involved. But nah, I can’t say that I ever have. I just don’t care to go that way.” 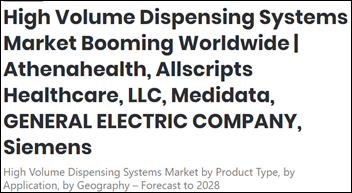 The offshore folk who announce a $3,000 market research report and then write it only after someone pays must know, as experts,  something we don’t – that Athenahealth, Allscripts, Epic and clinical trials platform vendor Medidata are among the sellers of pharmacy robotic dispensing systems. They say it’s a big market that is being energized because “the case of non-infectious diseases also increases.” You could take advantage of the company’s offer to “kindly feel free to grill us with queries” as it has “established the pillars of our flourishing institute on the grounds of Credibility and Reliability.” 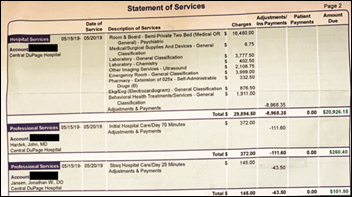 A despondent woman whose friend called 911 fearing for her safety is billed $30,000 by Northwestern Medicine Central DuPage Hospital for a five-night psych stay. She had bought one of the White House-touted “association health plans” (aka ACA-non-compliant junk insurance) that costs less but covers little. She knew her $210 per month plan didn’t cover mental health services, but said she didn’t expect to need them. She asked the hospital what each treatment was going to cost her, but they couldn’t answer, leaving her with a bill for double the average negotiated price (since cash-paying patients are billed higher than everybody else in our non-system). The hospital wrote the bill down to $9,000 and adds that they offered the patient help, but she didn’t return their calls or fill out their financial aid forms. She also admits that she started to buy real insurance through Healthcare.gov, but thought the information was confusing. I’m siding with the hospital on this one (although not the idea of insurer-negotiated pricing) since she blew several opportunities to make a responsible decision. But then again, much of our population seems incapable of making responsible decisions, sticking the rest of us with the bill. 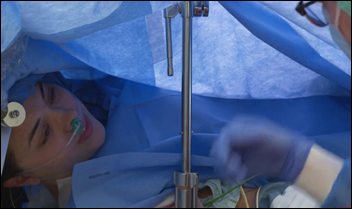 A Texas woman live-streams her brain surgery on Facebook in hopes of encouraging others to be optimistic about their outcomes. The stream skipped the graphic parts and instead featuring her speaking to the surgery team while remaining awake as the chief of neurosurgery of  Methodist Dallas Medical Center narrated and answered viewer questions. She went home two days later.

The New York Times suggests that patients avoid seeing doctors whose practices are owned by hospitals, whose facility fees can tack on unexpected hundreds to thousands of dollars per visit.

This has Weird News Andy written all over it. Entrepreneur David Hachuel, MSc, MPH, who hopes to commercialize an AI-powered stool analyzer, seeks 100,000 photos of bowel movements for training the system. Experts say a poop tracking app is sort of a good idea, but worry that it will send tons of healthy people to doctors unnecessarily and that a better approach would be to actually analyze a sample only when medically indicated. I read this and ponder, has any doctor ever actually asked a patient to bring in a photo of their bowel movement, and if not, how does an app add value? And also, are we so short on good uses of IT in health that poop photo analysis will lure investors? (cue Sally Field in the 1965 “Gidget” episode titled “All the Best Diseases are Taken,” which I just found by Googling in thinking instead of an “Arrested Development” reference). I would swear that Auggi’s video (above) and its rather foul call for photos were actually clever spoofs from The Onion.