From Policy Wonk: “Re: Primary Care First. Great job on your review of this disaster of a program. Thanks for going deep on the 100-plus pages!” I attended the PCF application webinar on Wednesday. Although I shouldn’t be surprised, I’m continually baffled by some of the things that happen with these programs. The most recent highlight is that the application requires the applying practice to list the NPI for every provider who has worked in the practice since 2013, even if they are no longer there, are no longer practicing, or are deceased. No concrete reason was given for this despite several people asking about it. I was also surprised by the continued inability of CMS to release slides for its webinars on a real-time basis. The slides had to be done to deliver the webinar, so why not make them available for immediate audience download? Telling interested parties that they’ll just have to keep checking back on the Primary Care First website is a tremendous waste of people’s time. I’d be interested to hear from anyone who actually plans to apply for this program.

Mr. H covered this earlier in the week, but I wanted to put in my two cents about the Walgreens plan to close 40% of its in-store clinics while adding Jenny Craig weight loss services at more than 100 locations in an attempt to boost sales. The Jenny Craig services will include individual consultations along with customized menu planning and meal delivery. As a clinician, I’m not a fan of Jenny Craig. My patients who have tried it have found the weight loss to be unsustainable when they stop purchasing food from the program. The company also hit a nerve with me last year when it announced its intent to add DNA testing to its weight loss plans because “customizing nutrition plans to an individual’s genetic makeup can offer members even greater personalization for weight loss and overall wellness.”

The reality is that most people who need to manage their weight don’t need super-sexy-sounding gene-driven remedies. They need basic nutrition advice, including how to prepare their own food rather than using higher-cost commercially packaged options. I love the way that the C-suite folks describe these moves, with the Walgreens CEO saying they are focused on creating healthcare destinations around a modern pharmacy. The reality of most Walgreens stores is that the actual pharmacy space is a tiny fraction of the store, with the rest of it being little more than a glorified convenience store.

I’m always on the lookout for cool healthcare tech, so was intrigued to hear about the Hyperfine portable MRI. The device, which is in the prototype state, is small compared to a traditional MRI, about the size of a large wheeled curbside trash can. Although the images aren’t quite the same quality of a standard MRI, there’s no need to magnetically isolate the patient. Hyperfine’s founder Jonathan Rothberg cites the ability to image patients without moving them as another benefit. The unit is slated to be significantly cheaper than existing machines, with a cost of close to $50,000 rather than the millions needed to buy a standard machine and set up a dedicated imaging suite. Rothberg’s previous entrepreneurial experience includes Butterfly Network, a handheld ultrasound that connects to the iPhone. The MRI device is under study in the neurological intensive care unit at Yale University. The company has applied for FDA clearance for brain imaging in adults and children. 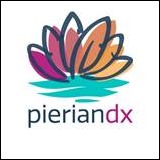 St. Louis-based clinical genomics company PierianDx closed a $27M series B funding round this week. The round included ATW Partners and SJF Ventures, with participation from existing investors including Health Catalyst Capital, Inova Health Systems, RTI International, and ARUP Laboratories. The company was founded in 2014 from Washington University in St. Louis and focuses on advancing cancer diagnostics and enabling clinical genomics as the standard of care. The company plans to use the funds to expand current operations and further develop its solutions. For those of you whose memory of Greek mythology is fuzzy, the Pierian Spring was sacred to the muses, and was regarded as a fountain of knowledge that would inspire anyone who drank from it.

From Gong Show Afficionado: “Re: earnings calls. The 10/21 article is phenomenal and I wanted to thank you for taking the time to share it! I used to think a lot about earnings transcripts and coming up with % allocations of speaker (i.e. if CFO is speaking less % of the time or answering less % of the questions quarter over quarter, I would assume a bad thing?) but not tone or word choice, so you got me thinking about it. I’ve bee on the sales side and now that I’m on the other side of sales pitches I have that inescapable feeling of you are lying to me and I know it because I’ve been on your side of the table. It makes decision-making difficult. It would be incredibly powerful to have a sales pitch BS evaluator hooked up to an LED scoreboard that you could have hanging above the conference table during the pitch so the buyer could provide real-time feedback to the seller on how they’re doing. Every time someone mentions their use of a data lake, the scoreboard goes straight to zero.” I’d go further to suggest a trap door that dumps onto a funhouse slide that takes the rep directly to the door and could be triggered by either an overall buzzword count or by a “whammy” button that we could hit when we the sales effort goes off the rails. 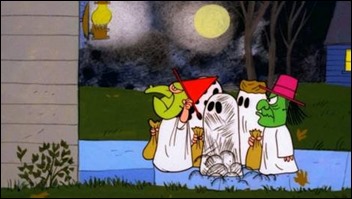 Hopefully your Halloween night will be ghoulish but not dangerous. The Journal of the American Medical Association came through this week with a host of Halloween-themed articles sent via email:

Personally, I plan to spend the evening pairing the occasional Reese’s Peanut Butter Cup with a nice glass of cab.

What’s your favorite Halloween candy? Leave a comment or email me.