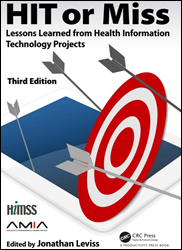 Reading the third edition of “HIT or Miss” is like trying to reconcile memories of someone’s previously vibrant life with their coldly objective obituary. It contains dozens of examples in which the exuberance, high-fiving (especially by the vendor’s salesperson), and lofty goals of improving patient care via IT somehow ended up as flaming wreckage whose major contribution is to serve as a cautionary tale for the rest of us.

You may well chuckle at the naiveté and hubris of each (unnamed) hospital’s executive and IT teams for making some really bad decisions, but deep down you know your own organization isn’t any better even though its gaffes aren’t included. Hindsight is 20-20.

You also might question why this sort of HIT autopsy holds value and I see your point. The organizations that have yet to make such plus-sized IT mistakes aren’t likely to read the book like the Bible and declare themselves reborn. Every IT project is different and maybe the lessons belatedly learned by other hospitals either aren’t relevant or must be relearned by others.

Still, it’s made clear that the enthusiasm to “do this project right” – implicitly outperforming lesser-skilled peers whose cloak of invincible destiny turned out to be full of holes – can be crushed by a single, cancerous-like cell that metastasizes. Its genesis isn’t notable – a low-level decision made in an overcrowded conference room that smells of stale bagels, Type A executives who insist pushing on to recoup their eye-popping software investment by bringing it live at all costs so they can be photographed at the ribbon cutting, and leaders who allow the scope to creep to appease an influential department head or foot-stomping doctor. Any one of thousands of ever-moving parts can cause the whole machine to blow up once the big switch is pulled.

The biggest takeaway here – not surprising that AMIA was involved – is that hospitals should  listen to their CMIO, clinical IT folks, and patient care front-liners. I had “your vendor” on the list, but I’ll asterisk that – some vendors are determined to make their clients successful and possess the competence to do so, while others peak at getting the contract signed and may do more harm than good.

These examples, provided by and recounted by a stunning roster of industry luminaries and edited by Jonathan Leviss, MD, are representative:

Each of the 48 case studies is interesting, even those that may now be mostly a historical curiosity now that integrated, single-vendor EHRs have eliminated some of the risk points of integration, upgrade timing, and multiple device use.

“HIT or Miss” was a lot more interesting and detailed than I expected. It recounts millions of dollars worth of bad decisions, unfortunate events, and vendor shortcomings that we wouldn’t have heard about otherwise. I’d like to think that no patients were harmed in the making of this book, but I’m certain that isn’t the case. And while IT sophistication grows linearly as health systems get bigger, complexity and thus the potential damage grow exponentially.

This is not my usual book review since it would be missing the point to focus on writing style or entertainment value (although both are excellent). Its value is to show what can go wrong when a project transitions from executive self-congratulation for choosing a bold IT path forward to their underlings trying to make it all work in an ever-changing environment full of self-interest landmines, competing pressures from all sides, and products whose shortcomings aren’t discovered until  analyst sleeves are rolled up.

Perhaps the takeaway is that it’s really tough to implement process change and ever-changing technology in meeting timeline and budget expectations while preserving the originally envisioned benefit to patients without harming them in the process. For that reason, IT leaders might want to stock up on copies to hand out to overconfident C-suiters and board members who feel that their executive insight justifies overriding the advice of those pessimistic, business-naive clinicians who won’t quite yapping about their “concerns” or the potential harm to patients that they can’t say with certainty will actually happen in standing in the way of lighting the candle. Worst is that they are right – you won’t know what you don’t know until you bring the system live and there’s never a perfect time to do that, so at some point you might was well just turn it on and be ready to fix what’s broken.

Thanks to attorney Henry W. “Hank” Jones, III, JD for sending me a copy of the book (he wrote Chapter 48 – “Explore HIT Contract Cadavers to Avoid HIT Managerial Malpractice.”) It’s $60 on Amazon.