The ONC blog this week featured a discussion on Electronic Prescribing of Controlled Substances (EPCS). Among physicians who prescribe controlled substances, those who use electronic systems to transmit those orders remains relatively low at 32%. Although some states have mandated the use of EPCS, others haven’t forced the issue with providers. EPCS requires multifactor authentication, and the reality for those of us who prescribe relatively few controlled substances is that the amount of work (and additional technology needed) doesn’t outweigh the potential for reducing drug diversion or other bad acts.

When I do recommend controlled substances, our practice has in-house dispensing capabilities that prevent the prescription from being diverted since we fill it right there. On the off chance that a patient wants a paper script, we print it on compliant paper. I’ve issued one paper script in the last two weeks, and it was a situation where the patient didn’t really want the medication but since they had a complicated fracture I was concerned about them going through the weekend without a backup plan for something stronger. I don’t think that script for five tablets of Tylenol with codeine has a high likelihood of contributing to the opioid epidemic. Still, mandates are coming including the SUPPORT Act, which requires that certain drugs covered under Medicare Part D must be prescribed electronically beginning in 2021. Depending on the frustrations generated by the clinician’s EHR, I wonder if some providers might just consider no longer prescribing agents that will require additional technology.

Lots of chatter in the physician lounge about the recent New York Times piece regarding wasteful spending in the US healthcare system. The comments are also a good read, especially those that note that although burdensome and wasteful, if we cleaned up these processes a lot of people would wind up unemployed. The piece actually draws on a special communication published in the Journal of the American Medical Association that estimates that 20 to 25% of US health spending is wasteful. In order to truly eliminate waste, a number of solutions would have to be employed, including following principles of evidence-based medicine, which would reduce unnecessary testing and treatments that unfortunately some patients demand. The estimated $760 billion exceeds our spending on education and the military, which is a shocking number. Evidence-based care would shave $200 billion off of that, and trimming administrative costs could reduce it another $226 billion. Better care coordination could reduce another $205 billion in wasteful spending. Another big chunk of spending is related to fraud and abuse, ringing in between $60 billion and $80 billion each year. Lots of food for thought, for sure.

I’m not sure what to think about Devoted Health and its decision to offer coverage for Apple Watches for members of its private Medicare plans. Many Apple Watch users drive me crazy, with the constant checking of their watches as messages and information flows through to their wrists. It’s every bit as annoying as having someone in front of you checking their phone instead of paying attention – having a smaller form factor doesn’t excuse the behavior. The Devoted Health program will pay up to $150 towards the cost of the device for its members in a move to stand above other Medicare Advantage plans. The jury is still out on whether wearables truly drive improved health outcomes, so this may end up being little more than a gimmick to try to entice members to join the plan. The $150 earmarked for Apple Watches can also be used for health-related classes and other programs, some of which are actually proven to drive outcomes. Devoted Health has roughly four thousand members but hopes to scale to 100,000 members over the next four years as it expands beyond its Florida footprint.

The workflow at my practices requires me to perform initial readings on plan radiographs while we wait for an overread. Although I’ve had a fair amount of training, some findings can be subtle and are easily missed unless you maximize the contrast and other enhancements available as you view the images on the screen. Despite my accuracy statistics, I’m always relieved when I see the overread and know that the radiologist agrees. I’m eager to see artificial intelligence applied to radiology at the point of care for rank and file physicians, not just in the intensive care units where a lot of the research is being done. Recently, several radiologist’s organizations released a joint statement warning that increased use of AI in radiology can raise the risk of system errors leading to adverse patient events. They call on regulatory boards to monitor AI systems to ensure patient safety, and also call for development of codes of conduct covering the ethics of AI use and warned against using radiology algorithms for financial gain. I can’t wait to see what diagnostic imaging looks like in a decade – it’s one of the areas with the most promise for delivering high-tech solutions to the bedside.

As the leaves are falling and summer is way behind us, I’m going to continue to call out CMS and its Primary Care First program. Their promised Request for Application was due “summer 2019” since the first performance year starts on January 1, 2020. It’s a little difficult to gear up for a program when you don’t know if you’ve been accepted or even if you want to apply since you don’t know what the details are. CMS hasn’t even done the courtesy of updating its website, which still says it anticipates a summer release. Come on, folks, either release the app or officially delay the program. Don’t leave people hanging – and acting like a practice could realistically target a January 1 start date just makes you look out of touch. 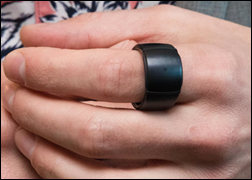 Since my favorite smart jewelry company Ringly went dark, I’ve been on the look out for other smart jewelry items. I’m still baffled by Amazon’s Echo Loop smart ring. It’s not fashion forward in the least but belongs to a group of devices that may or may not fill a consumer need along with Echo Frames glasses and Echo Buds earbuds. It’s a bit pricey at $130, but has potential for people who want another way to control their smart devices. Amazon refers to the group of devices as “Day 1 Editions,” which are past the beta stage but haven’t been fully proven for consumer purposes. The company describes them as “things that we’ve found delightful internally and we want to get customer feedback on it so we can continue to innovate.” It only comes in black and is only available in ring sizes nine and up, so not exactly dainty. Interested customers have to request an invitation to try the product.

What do you think of Amazon’s new wearables? Leave a comment or email me.