Researchers from the University of Pittsburgh School of Medicine and Humana determine that 25% of healthcare spending – between $760 billion and $935 billion per year – can be characterized as wasteful. They believe that $191 billion to $282 billion could be saved if interventions were put in place.

The study looked at waste across six categories:

Administrative complexity was found to be the biggest driver. Researchers couldn’t estimate administrative cost-savings through interventions like more seamless interoperability and value-based care due to a lack of previous studies done on the topic – a sadly laughable, highly ironic state of affairs that those working in healthcare will likely not be surprised by.

From EHRWhisperer: “Re: Advocate’s conversion. Advocate Aurora Health began it’s Cerner to Epic conversion in the first of four waves today at Advocate Condell Medical Center and Advocate Good Shepherd Medical Center. There were no major issues. The project will extend the existing Aurora Epic license to all twelve Advocate Illinois hospitals over the next twelve months. The merged system will be the largest single Epic database in the world.” The merger of Advocate Health Care and Aurora Health Care was approved in March 2018, resulting in an organization that has 27 hospitals, 3,300 employed physicians, 70,000 employees, and annual revenue of $11 billion. AHC was an Allscripts and Cerner site before the merger. Its conversion from Allscripts to Epic took place last December.

Filings with the Wisconsin Department of Natural Resources show that Epic intends to expand its Verona campus to accommodate another 1,200 employees over the next five years.

One Medical reportedly hires several banks to help it prepare for an IPO next year. Valued at between $1.5 billion and $2 billion, the tech-heavy chain of membership-based primary care clinics has raised over $500 million since launching in 2007.

Streamline Health Solutions names Wyche “Tee” Green president and CEO. He has been serving in those roles on an interim basis since July.

InterSystems develops data cleansing and normalization services for use in machine learning and analytics applications.

Devoted Health becomes the first Medicare Advantage plan to subsidize the Apple Watch purchases of its 4,000 members in Florida. Launched by health IT veterans Ed and Todd Park in 2017, the company has raised over $350 million and plans to expand to Texas.

The Harvard Pilgrim Health Care Institute will use TriNetX’s EHR data network in its management of the FDA’s Sentinel System, a national program that uses digital health data to monitor the safety of FDA-approved drugs and medical products.

Patients accessing Meditech’s Expanse or 6.0 EHR can now do so through the Apple Health app. 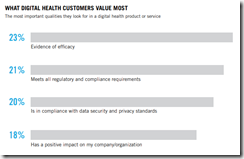 Roadblocks to digital health market entry include a lack of expertise and rigid business and reimbursement models that make getting to market difficult, according to a recent survey of 284 healthcare professionals. Digital health clinician end users say poor reimbursement, lack of expertise, and privacy/security concerns hinder their decisions to purchase new products.

Kaiser Health News looks at the small but growing trend of health systems getting into the housing business. Denver Health, for example, is converting a 10-story building near its campus to senior housing and transitional living for homeless patients who otherwise could occupy a hospital bed at a cost of up to $2,700 a night. The hospital estimates it could house a patient at its new facility for $10,000 a year, though transitional patients will be given help in finding more permanent housing within 90 days. 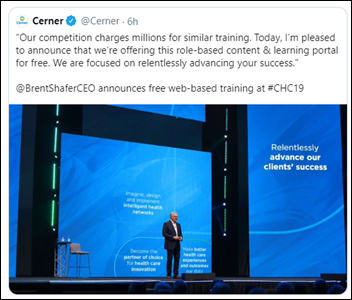