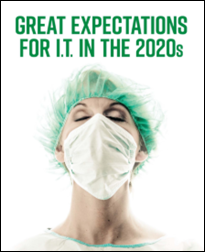 Normally my issue of Health Data Management goes straight into the recycle bag, since it’s usually a regurgitation of material I’ve already seen or even written about. The fall issue’s headline caught my eye, since “Great Expectations” is one of the novels I had to suffer through several times during my high school and undergraduate years. I’m sure they didn’t intend to evoke Charles Dickens, but maybe they did considering the major characters include a naïve youngster, a convict, and an eccentric who wants everything to be just like it did at a singular time in their youth. That sounds a bit like healthcare IT, especially when you add in the themes of rich versus poor, love versus rejection, and the ongoing struggle of good versus evil.

All literary parallels aside, I’m not sure what kind of expectations I have for what is to come in healthcare IT in the next decade. I think we all have enormous wish lists, but whether those items are brought to fruition or continue to dwell in the world of pipe dreams will remain to be seen. I think about some of the things I dreamed of as a child that currently exist. What if you could have a soundtrack for your daily life, that could play whatever song you were in the mood for? If the iPod and numerous MP3 players were close but not quite, now we have Spotify to satisfy most of our music cravings. What if you could talk to your computer and get information without even typing? Siri, Alexa, and Cortana can continue to duke it out, but I’m happy to be able to see what the weather is like while I’m scrambling around in the morning doing three things at once.

On the other hand, we see an industry that continues to remain somewhat hobbled by regulatory requirements, where many vendors have had to cast aside true innovation in lieu of checking a host of boxes for functionality that their users not only don’t want but find tedious or annoying. It doesn’t matter how good they might be for patient care, if no one uses them it’s a fairly moot point. Unless there’s a carrot or stick involved, organizations and their users aren’t going to just adopt things for the sake of adopting new features. There’s too much else at stake and too many other things that demand (and deserve our attention).

With that in mind, I’m not sure what I think about the upcoming requirements to (finally) institute Medicare’s Appropriate Use Criteria Program, which has been in the wings for years. Health Data Management happened to cover it in the issue that caught my eye, and I have to admit I had kind of forgotten about it, since it’s been coming at us in fits and starts for so long.

Essentially, on January 2, physicians who order advanced imaging tests (such as MRI, CT, and PET scans) for Medicare patients have to consult qualified clinical decision support systems before ordering those tests. The software is supposed to incorporate evidence-based guidelines and Appropriate Use Criteria (AUC) to make sure people aren’t just ordering expensive tests for every little thing, or because patients demand them. Commercial payers have already tackled this issue by requiring prior authorization for these kinds of tests, which Medicare is trying to avoid by instituting the AUC requirement. There are eight conditions that are being targeted, including low back pain and headaches.

The problem with the proposal is that the penalty occurs in the wrong place. If ordering physicians don’t do the right thing, then radiology providers won’t be paid for the test. This puts them in the position of having to make sure their referral base is doing the right thing, with some even offering access to clinical decision support systems for their referring physicians, who might also have that support within their EHRs. The prior authorization requirements used by commercial insurers put the burden squarely where it belongs – on the ordering physician who needs to be ordering tests that are needed and that will provide useful diagnostic information.

The first year of the program is designed to be an educational and testing opportunity for all involved, with the nonpayment penalty being applied starting January 1, 2021. Ultimately, CMS plans to force providers who don’t follow requirements for clinical decision support to seek a prior authorization. With all the work that organizations have put in during the last several years for this requirement (during its on again, off again progression), one could wonder whether it just would have been easier to institute a prior authorization requirement in the first place. Ordering physicians already have those workflows in place in their practices and the lion’s share of work is done by non-provider staff members. Medicare could have been the leader here, standardizing the requirements and drawing commercial payers into line to create a single set of prior authorization rules across all payers. Instead, it has created an additional burden that no one in the process (other than CMS apparently) wants to deal with.

I’ve been in the clinical trenches for a long time, and frankly I can only remember one time a prior authorization was denied for one of my patients. It was a scenario I can only describe as a goat rodeo. The CT scan was ordered urgently, as the patient was in my urgent care with severe abdominal pain and a host of abnormal blood tests. Since no one is sitting at the insurance company at 7pm on a Friday night to handle a prior auth, we proceeded with the test and tried to get the auth retroactively on Monday morning. The reviewer was demanding more information, because in my note I described one of the areas of abdominal tenderness as “mild” rather than using a more serious-sounding word or even omitting a qualifier altogether. It didn’t matter that the patient had guarding and rebound tenderness in another area of the abdomen, which are ominous findings on their own; the reviewer had the word “mild” stuck in her craw.

I had to admit I became rather hot around the collar, and might have asked her if she gave a damn about the fact that the patient had a 6cm tumor in their pancreas that was causing obstruction and mayhem. She certainly hadn’t bothered to look at the test result itself, which more than showed the study was warranted. By the time we were trying to get the prior auth, the patient had already been admitted to the hospital, undergone a number of invasive tests, and was coping with a cancer diagnosis and the high likelihood that he’d never see his children graduate high school. Eventually the reviewer relented and approved the test, but it was silly that we even had to go through the exercise.

Maybe that should be my “great expectation” for the 2020s, that some day physicians who are spot-on with their test ordering won’t have to jump through hoops on behalf of their patients. I don’t have a lot of hope for it, though. What’s your great expectation for healthcare IT in the next decade? Leave a comment or email me.