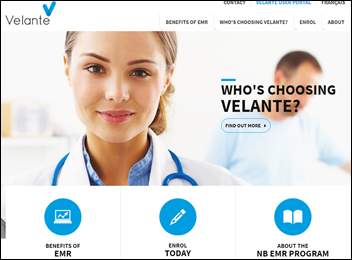 Canada’s New Brunswick Medical Society will close Velante, the for-profit company it created in 2012 as the sole EHR provider for the province’s doctors.

Few doctors signed up for the system, which was provided via New Zealand-based Intrahealth, despite government subsidies.

The province has since decided to allow doctors to use whatever EHR they want.

From Jules Verne and Shirley: “Re: must-follow health tech influencers. What do you think of this list?“ Most of the winners have good career accomplishments and job stability that give them credibility to be called an “influencer,” while others have done little beyond promoting themselves loudly. The winners were plucked out of the Twitterverse by the vendor-sponsor’s recently-graduated Twitter manager, whose has zero healthcare and IT experience. I feel that I can critique the list since I’ve appeared on it before, though I wasn’t desperate enough for attention or validation to brag about it. But I do admire any business model that is fueled by ego and insecurity since we adults remain high schoolers in many ways, so perhaps I’ll start my own certification program or “Best Doctors” type list.

Last week’s poll results are informative even though I regretfully neglected to provide a “no regrets” option. Takeaways from respondent comments: (a) choose wisely in giving up your preferred lifestyle to grind away at a job / career that could go up in smoke because of some unforeseen corporate event; (b) take risks that force you out of your comfort zone; (c) stand up to corporate bullies and bad bosses when patient safety is at risk; (d) spend more time with your kids when they are young since you only get that chance once; (e) build a community outside of work, such as volunteering; and (f) spend time every day learning something new.

New poll to your right or here: have you deferred important medical care for financial reasons?

Listening: new from Temples, which lives somewhere between riffy, chorussy progressive music and 1960s reverb-loaded psychedelia. I’m not sure it’s deep enough to hold my attention, but it was snappy enough to get it in the first place (see: Muse).

The Department of Justice charges 35 defendants, including nine doctors, for fraudulently billing Medicare $2 billion by running phony telemedicine companies whose doctors ordered unnecessary cancer genetic screening tests that were processed by private labs that were in on the scheme. The owner of Atlanta-based molecular testing firm LabSolutions – 40-year-old Minal Patel, who was charged with soliciting Medicare beneficiaries through telemarketing and health fairs and then bribing doctors to order unnecessary tests to the tune of $494 million – had $30 million and his luxury cars seized. 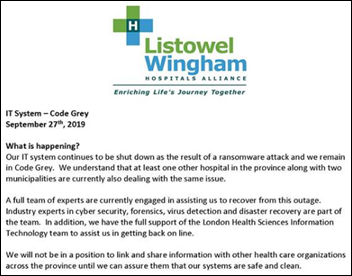 In Canada, the systems of two-hospital Listowel Wingham Hospital Alliance go offline due to a ransomware attack. 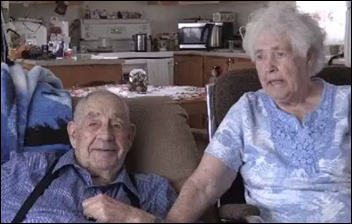 In Canada, the document scanning service of a closed medical practice refuses to give an elderly couple copies of their medical records unless they pay $309. RSRS (Record Storage and Retrieval Services) had a change of heart once they were named in a TV station’s report and says it has a program to help patients who are unable to pay. RSRS offers free services to closing medical practices that include notifying patients, creating a customized web page for inquiries, providing boxes and packing help, extracting data from EMRs, shredding paper, and selling or donating used medical equipment. Nova Scotia’s Personal Health Information Act allows providers to charge $0.20 per page and $12 per hour for copying a patient’s paper records. Only 300 of the province’s 2,400 doctors use EHRs.

The Detroit paper profiles David Farbman, an entrepreneur who was lured into healthcare revenue cycle management years ago by Meaningful Use-fueled EHR proliferation. He began his career running his dad’s huge commercial real estate firm, developed and sold a hunting and outdoor life media company, and formed a failed competitive hunting tournament in which participants stalked animals to shoot with tranquilizer darts (the concept reminded me of the bizarre movie “The Lobster” that I watched on Netflix recently). His HealthRise has 20 hospital clients and $20 million in annual revenue.

In India, a newspaper claims that “corporate hospitals” are intentionally adding clauses to their patient consent forms in the English language only, hoping that non-English speakers won’t notice that they are giving their permission for the hospital to use their data for research.

In England, hospital volunteers help patients who have motor neuron disease “bank” their voices so that if they lose the ability to speak, they can communicate through a synthetic computer voice that sounds like their own. I Googled and turned up Nemours-created ModelTalker, in which a user records themselves reading 1,600 sentences via a web tool or Windows app, after which  the result is turned into a synthetic voice for $100.

Sponsors named to Modern Healthcare’s “Best Places to Work in Healthcare” for suppliers in 2019 are: