Patient engagement is a hot topic in US healthcare, so I’m always interested to see how it plays out in other countries. A recent effort looked at the challenges of treating tuberculosis, specifically in ensuring that patients take their medications consistently during the six months needed to eradicate the disease. Patients in Nairobi, Kenya were enrolled in a program that delivered repetitive cellphone texts to encourage patients to take their medications. Those who participated had fewer negative outcomes compared to the control group. The texts ask patients to actively confirm that they have taken their medications. Those who responded were thanked and informed of their standings compared to other patients, including whether they made it to the “winners circle” for those with 90% adherence. Non-responsive patients receive additional texts, phone calls, and potentially in-person case tracking.

Stanford Medicine has launched a digital consult service to assist in diagnosis of challenging patient cases. They parallel the offering on the “curbside consult,” where physicians ask their colleagues about a case, hoping to draw from experience and past patients. The Clinical Informatics Consult solution has been in the works for more than a decade, and is currently live as a research project that can query data from millions of patients. Clinicians submit a clinical query and receive a report with summaries of similar patients in Stanford’s clinical data warehouse, including how they were treated and what outcomes resulted. The team has responded to over 150 consult requests from Stanford physicians. Developers hope that other academic hospitals may be able to use similar technology to help their own physicians.

I was recently asked to provide a reference for a former employee. The process was conducted using an online portal called SkillSurvey. The company claims to provide a data-driven hiring approach to assist employers in identifying job-related competencies along with soft skills. According to their data, 85% of references typically complete the company’s online survey and most do so within two days. Employers receive a report that claims to be predictive of a candidate’s chances for a successful first year on the job. The data shows how a candidate ranked across multiple references which sure sounds like more fun than trying to compare screening notes from HR staffers that don’t completely hit the mark, as I frequently experienced in a past life.

They didn’t go into the detail of how a potential employee likes to do their work, which I think would also provide useful data points prior to hiring. I recently had to have a “counseling” opportunity with an employee who thinks that trying to do the majority of your work on a smart phone is a good idea. Consultants are always busy, but they need to figure out what you can get away with doing on a small-format device and what requires you to just park yourself in front of a laptop or desktop. The biggest issues I tend to see with phone-related work behaviors are these: failing to see all of the recipients on an email before replying to all (especially when the reply is inappropriate for the entire audience); failure to see email attachments; difficulty adequately managing the calendar because of limited screen real estate; increased typos; and failure to read the entire email before responding, leading to comments that waste other people’s time. I’m all about being able to be mobile, but sometimes you just need to do your work on a big screen and with a keyboard.

A colleague of mine keeps trying to recruit me to the Medici platform, which offers everything from secure physician-patient communication and referral routing to billable audio/video consultations and ePrescribe services. Their marketing is straightforward, listing three simple steps to allow you to “get paid for texting with your patients.” Many physicians might not understand the nuances of what it means to begin using a service like theirs, particularly with regards to how those patient-physician communications get documented in the patient chart (or perhaps not) and whether the auto-translation features it offers are accurate. The company also offers texting with other professionals, such as veterinarians. The Austin-based startup has raised $46 million and has used analogies to identify themselves alternately as the Uber of healthcare or the WhatsApp of healthcare. I’m not sure of the origin of their name, but of course it reminds me of the Medici family, who schemed their way through Tuscany in the 15th and 16th centuries.

Speaking of telehealth apps, Planned Parenthood has entered the telemedicine space with the launch of their new app, Planned Parenthood Direct. It offers birth control options, including contraceptive pills, patches, and rings, along with treatment for urinary tract infections. The app is live in 27 states and the District of Columbia, with plans to expand to all 50 states by next year. It also allows patients to book in-office appointments for other contraceptive services such as IUDs, implants, and injections.

I recently encountered a situation where an elderly family member was receiving unneeded screening tests on the recommendation of their physicians. Knowing the physicians in question, I had a couple of suspicions. The first physician is part of a large medical group owned by a hospital system that sees itself as a major player in value-based care, and I wondered whether it was easier for him to just order screenings rather than exclude the patient in their crazily complicated EHR. The second is an independent physician who was ordering tests that would mostly lead for profit for his practice, which was particularly disturbing because the tests in question are invasive. A recent article in the Journal of the American Medical Association adds another scenario, which is the possibility that physicians don’t want to stop ordering screening tests because it will make them seem like they’re giving up on their patients. The decision to provide less care for older patients is a difficult one, and I hope more physicians, patients, and families are up to the task given the size of our aging population. 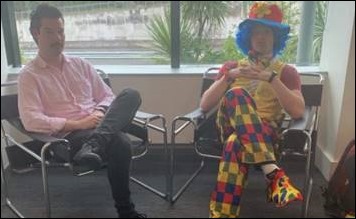 Sometimes companies don’t have the wherewithal to perform the difficult tasks that need to be done within an organization, so they bring in consultants. I’ve been on both sides as companies use consultants to downsize unwanted employees or deliver other reorganization strategies. It’s unsavory and has even been the stuff of movies such as “Up In the Air” with George Clooney. Having been party to horrific termination meetings in the past, I really enjoyed this piece about a New Zealand employee bringing an emotional support clown to his own firing. The clown mimed crying as the employee was fired and created balloon animals, even though they were a bit noisy. Kudos to the employee for having a sense of humor and being willing to spend $200 to give his former employer something to talk about.