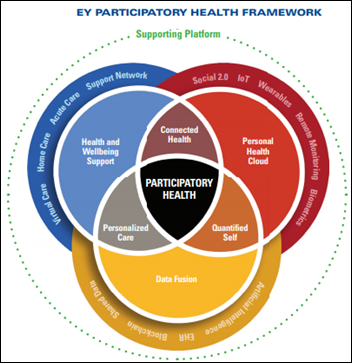 A report from the American Hospital Association and consulting firm EY says that participatory health, or “healthcare with no address,” is coming. It predicts that health systems will respond to consumers who want on-demand, connected, and data-driven services.

The report says a participatory health framework will require health systems to offer:

The report predicts that physicians will become “data-driven conductors” who will take responsibility for managing the lifestyle and wellness of patients.

The authors observe that while the future is more patient-centric and participative, health systems must move toward value while continuing to earn most of their revenue for volume. They will also have deliver anywhere, anytime care even though they have spent a lot of money on brick-and-mortar locations.

Nontraditional players such as entrepreneurs, retailers, and technology companies are ahead of health systems in offering consumer-oriented health services. Value-based payments favor non-hospital locations such as retail clinics and consumers prefer those anyway, with the next step for those retail locations being to offer chronic care management via telehealth.

The article also calls out successes in which health systems have applied their quality improvement and relationship-building expertise to partner with their communities to address social determinants of health.

From Set in Code: “Re: CPT codes. I work in a large Medicaid health plan. CMS requires use of AMA-copyrighted CPT codes. We are now being charged per member for each instance of the CPT code set that is used in any of our systems, meaning that we’re paying AMA multiple times for the same member. It also seems that organizations pay radically different per-member rates. AMA has created a monopoly and I believe that CPT licensing revenue is its largest revenue source, but I would like to see leverage applied to keep the cost reasonable as AMA seems to be offsetting shrinking membership by forcing health plans and providers to make up the gap.” AMA’s most recent tax filings show a profit of $26.4 million (up from $9.4 million last year) on revenue of $317 million, of which only $38 million came from membership dues. Royalties generated $148 million of the “other revenue” total of $191 million. AMA paid its EVP/CEO $2.2 million, its COO $1.2 million, and the former Allscripts executive who heads up the CPT group $900,000. About 80% of US doctors are not AMA members. AMA made $1.5 million in political contributions last year and spent $20 million on lobbying, just in case you want to launch a grassroots effort to get politicians to rein in its CPT fees. Like a lot of member organizations (including HIMSS), the organization’s most significant revenue comes from selling access to members and running businesses that actually compete with the work of some of those members (as I always say, that’s the “ladies drink free” business model).

From Jonas Sister: “Re: Epic’s employee testing. Some of your readers have spoken, but you haven’t.” My position is that: (a) Epic can use whatever methods it wants to hire employees and it’s nobody else’s business; (b) you can argue theoretically why Epic’s tests shouldn’t be good predictors of job performance, but you can’t argue with the success Epic has had for decades in using those tests virtually unchanged to hire thousands of employees; (c) people who complain about Epic’s tests as being irrelevant or unfair are usually folks who weren’t hired, either by Epic itself or its health system customers who administer the same tests to their own prospective Epic team members; and (d) while we might personally believe that our experience should be valued over test scores, that’s not the case with Epic, who sees greater long-term promise in a blank canvas. Also note that Epic has an endless supply of applicants, the company is an efficient machine in onboarding new hires and either moving them up the ladder or out the door, and its processes are apparently so well laid out that it doesn’t need people who have learned bad habits from crappy health IT companies. I will give more credence to passionate arguments about how Epic’s hiring and retention practices are wrong once I see the company struggling because of them. It hurts to be passed over purely based on the results of a “lions, tigers, and cages” type question or a MUMPS-like programming logic quiz, but the most important logic question is why anyone would expect Epic to ditch practices that made it the industry leader.

Two-thirds of the employers of poll respondents have laid people off recently, and of those, about half say that older or sicker employees seemed to have been targeted. Not Exactly says his EHR vendor laid off to hit a payroll dollar target, so that raised the risk for experienced, higher-paid employees. Cosmos says their vendor employer reduces headcount by running long hiring freezes instead of layoffs, but the folks who leave are often younger ones with better options and who don’t need the health insurance instead of those who might be laid off otherwise.

New poll to your right or here: Which factor do you think was most important in being hired by your current employer? 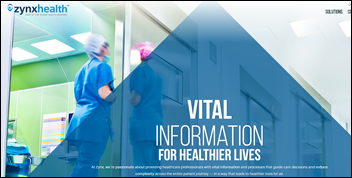 I was playing some country music on the Sonos for a visitor who, unlike me, enjoys it. Just about every song featured cartoonishly cowboy-hatted, testosterone-swaggering male singers with questionable Southern accents. I looked up how many of the 20 or so songs that we heard were actually written by the throaty twangers themselves. Answer: zero, although a couple of them shared a songwriting credit with an actual songwriter in what I imagine was a pay-to-play deal to get the tune recorded in the first place. Country and pop were about the same on Billboard’s current top 10 charts – lots of co-writing credits, but no singer actually wrote their hit solo. Conclusion: as in acting, comedy, politics, and maybe most other areas, music stars are usually just reading someone else’s thoughts since they are entirely separate forms of craftsmanship, although (a) those with star power in TV and music can command inflated billing as executive producers or co-writers, respectively; and (b) in music, at least the less-recognizable people who actually create the songs are earning publishing royalties in perpetuity instead of swigging vodka from an onstage water bottle while unenthusiastically shouting “How you doing tonight, Omaha?” from their gig in Kansas City.

September 26 (Thursday) 2 ET. “Patient Education Data: A Key Ingredient for Improving Quality and Patient Experience.” Sponsor: Healthwise. Presenters: Victoria L. Maisonneuve, MSN, RN, director of the Nursing Center for Excellence and Magnet program, Parkview Health; Marta Sylvia, MPH, senior manager of quality improvement and outcomes research, Healthwise. Healthcare data is everywhere! It’s scattered across various systems and in countless formats, making it difficult to collect and glean actionable information. Knowing where to start depends on what your organization wants to accomplish.  By focusing on your patient education data, you can drive quality improvement across your organization. Vicki Maisonneuve will share how her team analyzes data around the use of patient education. By combining different data sets, she can easily identify trends, gaps, and opportunities to improve quality and patient experience across Parkview Health. 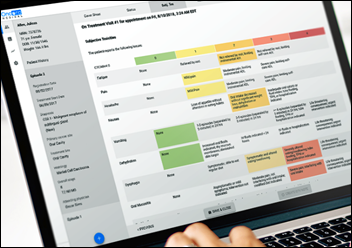 An article in Foreign Affairs says that China is following the economic growth script of Germany, France, and Japan in moving up the food chain from manufacturing cheap global goods to creating an innovation powerhouse that is being driven by a world-leading economy and government-led investment in research. It predicts that China will soon end the US’s 70-year run as the world’s leader in science and technology. The authors cite JAMA, which predicts that China will become the world’s leader in drug development in the next five years. The well-credentialed authors recommend that the US government spend more on scientific research, push efforts to translate the results into marketable products and services, and create jobs outside of the usual hub cities like Seattle, San Francisco, and Boston and instead focus on cities where land is cheaper and people can be more productive. 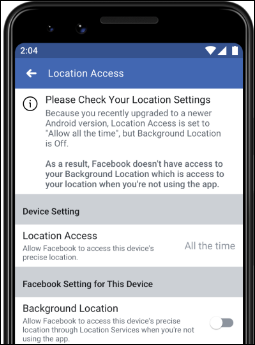 Facebook warns users that new privacy protections are enabled by default in IOS13 and Android 10 that prevent the app from tracking its users in real time, which Facebook insists (without irony) is a problem because users will thus be deprived of valuable services such as location-targeted ads. The new features mimic privacy options that are already available in Facebook, but Facebook knows that few users modify its defaults and in any case will struggle to find the option within its complex privacy settings menu.

The Chicago business paper looks at the highest-paid executives of Lurie Children’s Hospital, including the CEO ($2.2 million) and the CIO ($460,000).

Britain’s health secretary Matt Hancock declares that he won’t let his country’s drug usage “escalate to the level seen in the United States,” following release of a new government report that says 25% of people in Britain are taking meds for pain, anxiety, depression, and insomnia, with half of those being long-term users of at least a year. More than 10% of Britain’s population take antidepressants and nearly that many are taking opioids, with women and people in poorer parts of the country having higher rates. England and Wales have a long way to go to hit US-class opioid death rates, as just 2,200 people there died of opioid overdoses last year vs. 47,600 in the US.

The 33-year-old investor co-founder of Hims – which peddles erection and baldness treatment drugs following an “online assessment” that is reviewed by “our network of doctors” – publicly announces his expectation of being a billionaire “by my mid to late 30s” in a Quora post he later deleted in a late-onset attack of faux humility. If you want to upend US healthcare and save billions of dollars, make all drugs available without a prescription since consumers who want them will get them at any cost regardless. 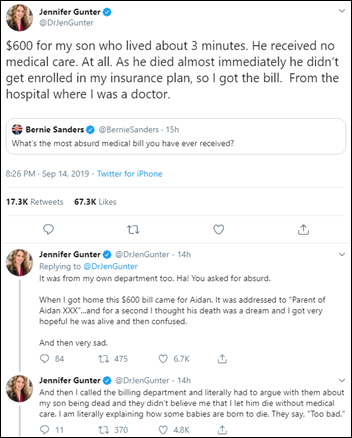 @DrJenGunter explains why she became a patient advocate in answering the call of Bernie Sanders to describe “the most absurd medical bill you have ever received.”