Surescripts CEO Tom Skelton told customers the move was made to ensure the “integrity of its network.” It came after Surescripts allegedly discovered that ReMy had requested patient insurance information and prescription pricing data that it then passed on to drug marketing websites without permission. ReMy has denied any wrongdoing.

The tit-for-tat amongst the trio has been going on for several months, with Surescripts claiming it would take its complaints to the FBI and Amazon retaliating with threats of a lawsuit.

The FTC filed an antitrust lawsuit against Surescripts in April for allegedly monopolizing the e-prescribing market, specifically in the areas of routing and eligibility.

From MIPS Maven: “Re: MIPS. More than a dozen major EHRs have not released full 2019 MIPS functionality. Practice Fusion just released their dashboard yesterday after months of customer complaints. MIPS is a FULL YEAR program that began on January 1, 2019. How are EHR vendors not being fined for failing to offer MIPS functionality when they are ONC certified?”

From Attendance Mandatory: “Re: conferences. Don’t you find it ironic that telemedicine conferences require in-person attendance?” I find it ironic that any technology-related conference requires in-person attendance, but I also know that the cash register rings hardest from vendor booths, hotel room bookings, and endless venue advertising. You could easily live-stream every conference education session or just put the video on YouTube as we do webinars. However, attendees are most interested in socializing, making personal connections, or cruising the show room floor, so just watching podium presentations – which are often not very good or very timely anyway – won’t cut it. Conferences provide the supply of whatever it is that the market demands. I’m interested in how the heavily investor-funded HLTH conference will fare in October, having sat out 18 months after making the disastrously stupid decision to launch its initial conference immediately following HIMSS and in the same city of Las Vegas. I haven’t heard any buzz about the 2019 version of HLTH despite its many “media partners” (although quite a few of those are lame).

From Dr. Doctor Please: “Re: surprise medical bills. This is one of the most depressing stories about my profession that I have ever read. Goes well with your recent remarks about how we doctors brought a lot of the burnout-causing conditions on ourselves and how medicine is just another business.” Kaiser Health New says that physician groups are among the biggest and well-funded opponents of laws that would prohibit balance billing, but the real force behind the media blitz is private equity and venture capital firms that have bought physician staffing companies. That earns them fortunes as they intentionally remain out of insurance networks so they can charge whatever they want and leave the patient owing the difference. A snip:

In some areas, doctors have few options but to contract with a staffing service, which hires them out and helps with the billing and other administrative headaches that occupy much of a doctor’s time. Staffing companies often have profit-sharing agreements with hospitals, so some of the money from billing patients is passed back to the hospitals. The two largest staffing firms, EmCare and TeamHealth, together make up about 30% of the physician-staffing market. That’s where private equity comes in. A private equity firm buys companies and passes on the profits they squeeze out of them to the firm’s investors. Private equity deals in health care have doubled in the past 10 years. TeamHealth is owned by Blackstone, a private equity firm. Envision and EmCare are owned by KKR, another private equity firm.

With affiliates in every state, these privately owned, profit-driven companies staff emergency rooms, own dialysis facilities, and operate physician practices. Research from 2017 shows that when EmCare entered a market, out-of-network billing rates went up between 81 and 90 percentage points. When TeamHealth began working with a hospital, its rates increased by 33 percentage points. 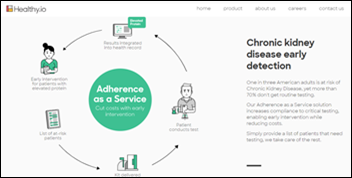 Healthy.io raises $60 million in a Series C funding round and receives FDA clearance for the use of its smartphone-based ACR test to be used in diagnosing chronic kidney disease. The company released a smartphone-based urinalysis app last year. 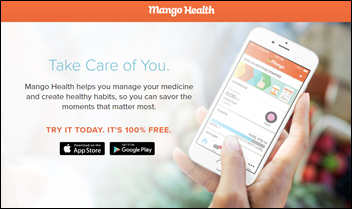 Health IT consulting firm HCTec will invest $500,000 in expanding its workforce by 100 employees over the next five years in Tennessee. 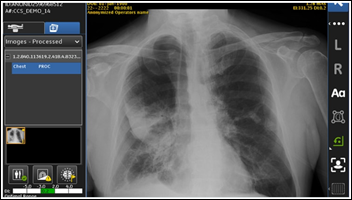 GE Healthcare receives FDA clearance for its Critical Care Suite, an AI-powered X-ray device that can reduce the time between diagnosis and treatment for a collapsed lung to as few as 15 minutes. The company is working with scientists at the University of California to develop screening capabilities for additional conditions. 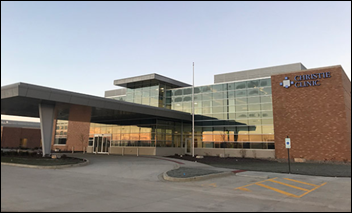 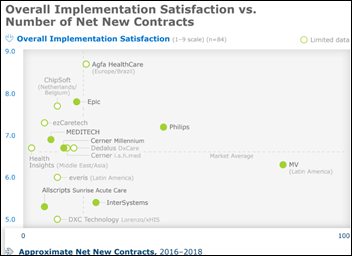 A new KLAS report on EHR implementations outside the US finds that Epic has the highest satisfaction and its customers implement the widest variety of software modules. Allscripts customers report budget overruns and worry that the company is more focused on sales than implementation; InterSystems overpromises on scope and timelines; and Meditech customers are most likely to report budget overruns due to unexpected third-party and infrastructure costs. However, Meditech finished first on hitting the timelines that are under its control. Epic takes the highest amount by far of EHR project budget at up to $164 million, while Meditech, Philips, and MV had narrower cost ranges that were in the single-digit millions.

Redox posts the agenda for its Healthcare Interoperability Summit, convening in Boston on October 15. 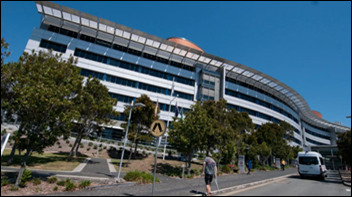 In Australia, Queensland Premier Annastacia Palaszczuk promises to investigate the IEMR crash that occurred Tuesday afternoon across 14 hospitals. The $1.2 billion system was down for several hours after a routine Cerner software patch caused a “system degradation.”

Healthcare technologist Fred Trotter says Facebook still hasn’t fixed some privacy-compromising features of its Groups function, potentially exposing the medical information of people who sign up for health groups. Facebook did a partial fix: (a) you can no longer download the information of group members unless  you yourself are a member; (b) Facebook users can no longer add other users to a group without their consent; and (c) groups are set to be “private” by default. Fred says Facebook needs to add name privacy, so that members are listed by only their first names and are not linked to their full Facebook account, which means the user can interact with the group but nobody can find out more information about them. This is similar to how Facebook set up its “dating” feature” to facilitate privacy. 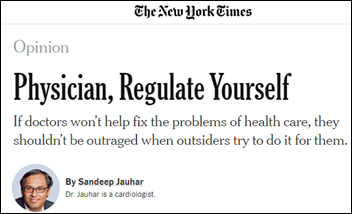 A cardiologist’s New York Times opinion piece says that doctors are always outraged and surprised at onerous or ineffective regulations that are forced upon them, but have done little to offer their own solutions to problems such as inappropriate imaging. He notes interestingly that Medicare created a physician golden goose in 1965 in virtually guaranteeing that medical services would be paid for, but doctors cashed in while ignoring waste and fraud that was eventually addressed by insurers and lawmakers in the form of managed care. He concludes that doctors can retain their independence only if they become more active in addressing healthcare’s problems, some of they they themselves created.

Google Cloud Executive Advisor Toby Cosgrove, MD – formerly CEO of Cleveland Clinic – says that health systems have spent so much on Cerner and Epic that Google, IBM, and other companies aren’t interested in trying to launch competing EHR products. He said in a conference this week that IBM and Google both considered developing ad EHR, but it’s probably too late.

University of Oxford researchers have designed an algorithm that can detect potential signs of heart attacks years before traditional methods. The technology can flag indicators like inflammation, scarring, and changes in blood vessels that supply blood to the heart. When combined with traditional scans, researchers hope that the software will assist providers in early intervention and treatment strategies. 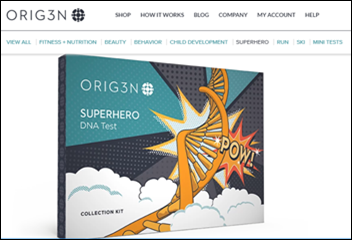 Orig3n CEO Robin Smith pushes back against the accusations of 17 former employees who claim the genetic testing company manipulated results to cover up testing errors that led to radically different results when the same genes were tested separately for fitness and nutrition profiles. They claim to have logged 407 such errors in a sample of 2,000 tests over a three-month period, and say that marketing, rather than science, was the priority. Smith says the claims are inaccurate and that “former employees are former employees for a reason.” This is the same at-home testing company that made news last summer for failing to recognize that one customer’s DNA sample was actually from a dog.