[Regarding the Vince Ciotti interview] Wow, what a great interview! Also, THANK YOU for compiling his PowerPoint presentations into one PDF document! Vince is right! “You can only learn from the past. You can’t learn from the future. It’s not here yet. The mistakes made in the past will be made in the future unless you learn from them and change them. It’s such a priceless thing.” As a young female millennial in healthcare IT, I am appreciating this wisdom and am determined to go through all 1,438 slides. Thanks for conducting a great interview! Wonderful answers Vince! (Weird_Female_Millennial_JCV)

Thinking about the situation for two seconds, many health IT discussions about burnout make no sense. Has burnout among medical assistants increased a huge amount since EHRs or EHR-heavy requirements were put in? Not really, so the source here is probably not the EHR. What’s the rate of burnout among VA staff, who have an EHR that on the clinical side is hugely unusable? It’s about 1/2 that of elsewhere. So it doesn’t seem like the EHR is a driving factor here. Why does your job suck? Probably management. If management came by with a survey asking why your job sucked, would you check the box that says “management sucks?” Only if you were a baby in the corporate world.(tEHRibble)

M&A is not an eventuality, it’s a deliberate strategy. It is so across all industries, including hospitals. How does any business grow in a zero-growth industry? M&A. Any company’s mission and responsibility lies with its shareholders. Some folks struggle with the realization that healthcare is not an altruistic endeavor, not any more at least. (El Comadante)

A survey by the UK’s Royal Society for Public Health finds that the most toxic feature of social media – even more so than the content posted by users — is the “like” button.

An oncologist in Australia admits that she was overly influenced by “the opioid industry” when she entered practice in the early 2000s, where drug company reps casually convinced her that the company’s opioid was safe while paying for her journal subscriptions and lunch, which was a small investment given that her resident’s father was flown by a device manufacturer to a Scottish castle to discuss coronary stents. She recommends that doctors be educated on “the insidious influence of drug companies” that vie for their attention when they have little time to critically evaluate company claims.

Scammers are using AI-powered voice impersonation software to call company insiders and convince them to transfer money to foreign accounts or to divulge sensitive internal information.

Rennova Health, the publicly traded (but Nasdaq-delisted) lab and software company that bought and closed Jamestown Regional Medical Center (TN) after walking away with employee tax and Social Security withholding, confirms that is behind on employee paychecks at the recently acquired Jellico Community Hospital (TN) and has cancelled the employee health insurance plan while continuing to withhold their premium payments. Rennova Health’s CEO, an Irish citizen who lives in the Bahamas, sued a Tennessee state senator in July 2019 for calling him an “Irish gangster” who came to Tennessee to cheat locals after the company closed JRMC. His primary business interest appears to be a chain of toxicology labs. Several struggling rural hospitals have been acquired and eventually closed by similar lab companies that are anxious to bill at higher hospital rates, which lasts only a short while before insurers stop paying. RNVA shares are trading at $0.0001, valuing the company at basically nothing. 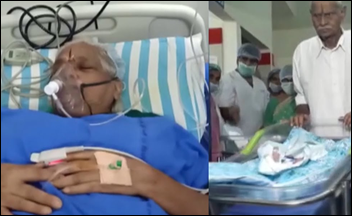 Just because you can doesn’t mean you should. A 74-year-old rural Indian villager becomes the world’s oldest new mother after delivering IVF-created twin girls. Mom, who was hospitalized for her entire pregnancy, says she was inspired to give birth 30 years after the onset of menopause when a 55-year-old neighbor became pregnant. Dad is 80.