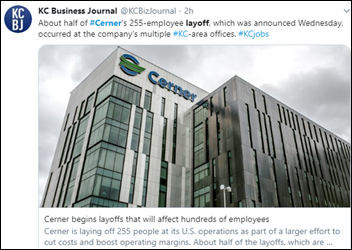 Cerner will lay off 255 workers across roles and offices by November 5 as part of a cost reduction program that is intended to boost the company’s profitability.

Cerner announced a hiring freeze this past April and pledged to achieve operating margin targets of 20% for Q4 2019 and 22.5% for Q4 2020. This came in response to Cerner’s April 2019 “cooperation agreement” with activist investor Starboard Capital, which despite holding just 1.2% of outstanding CERN shares, was given four board seats and promises to improve profits. Starboard has since started selling off some of its CERN shares as their price increased.

Rumors suggest that separated employees will received eight weeks’ salary plus and additional two weeks of pay for each year of service. They will also be paid for unused paid time off.

The company says it will hire hundreds more employees by the end of the year.

Meanwhile, the Kansas City Business Journal reports that the company continues to pay former president Zane Burke $112,000 a month as part of a $2.7 million severance package. 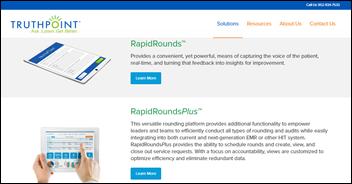 Health Recovery Solutions raises $10 million in a Series B funding round led by Edison Partners. The Hoboken, NJ-based remote patient monitoring company has grown to 80 employees and raised $16 million since launching seven years ago.

Lab-testing startup UBiome files for bankruptcy, inspiring a plethora of excrement-inspired jokes and Theranos comparisons on Twitter. The San Francisco-based business — which placed its co-CEOs on administrative leave and  laid off staff earlier this summer amidst an FBI investigation into its billing practices, among other purportedly bad business dealings — will use an $8 million bankruptcy loan to stay afloat until it can find a buyer. CVS has reportedly put a halt to sales of the company’s at-home gut health testing kits.

In Australia, EHealth Queensland names hospital executive Damian Green CEO and CIO. Green takes over from Richard Ashby, who resigned eight months ago amidst continued provider pushback against the statewide IEMR rollout and accusations of improper conduct with a staff member. Green will oversee the continued rollout of the Cerner software, a project that has been put on hold until 2021 as the agency sorts out patient safety and budgeting issues.

CNBC reports that Verily is working with wearable heart monitoring company IRhythm to develop a wearable for people at risk of atrial fibrillation. Verily Head of Clinical Science and Neurology William Marks, MD has said the device will be developed with physicians – and their aversion to unnecessary data – in mind 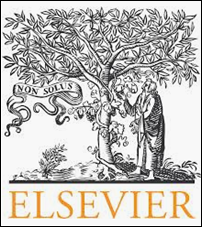 Elsevier will use a rare disease database created by NIH’s National Center for Advancing Translational Sciences in its development of a Web-based diagnostic tool.that will take into account patient symptoms, medical histories, and predilection to certain rare diseases. 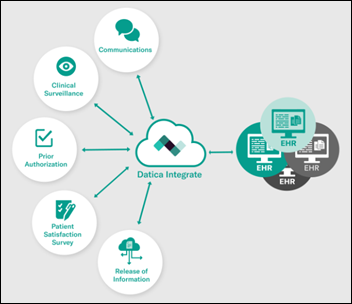 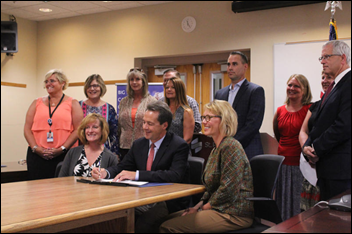 Montana Governor Steve Bullock signs an executive order allocating $19 million towards the funding and development of the Big Sky Care Connect HIE. The nonprofit will hire a vendor to manage its data network later this month. While Big Sky is now the state’s official HIE, it’s not its first. HealthShare Montana was established with HITECH funding, but later shut down over governance and technology issues. 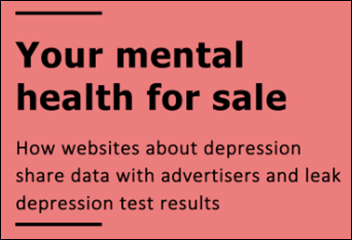 European advocacy group Privacy International discovers that Web-based mental health services in the UK, France, and Germany have been selling user data to third parties for ad targeting without permission. Google, Facebook, and, to some extent Amazon Web Services were top purveyors of data. 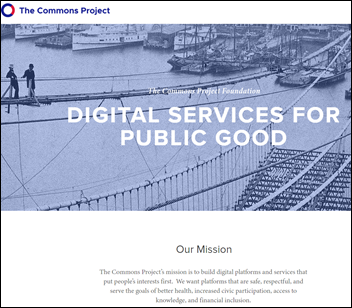 The Commons Project, UCSF Health, Open MHealth, and other groups will develop CommonHealth, an Android alternative of IOS-only Apple Health Records. It will be the first project of non-profit Commons Project Foundation, which will build public-benefitting digital projects that are free of third-party financial interests. The organization’s leaders have healthcare experience in companies such as Wellpass, Sapiens Data Science, and Surescripts. 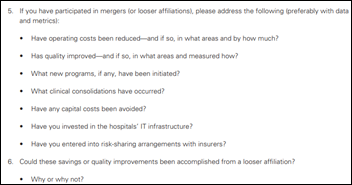 Healthcare investor Garen Sarafian isn’t impressed with an American Hospital Association-commissioned article that claims hospital mergers decrease costs and increase quality. He notes that the piece was not peer-reviewed, the authors chose which hospitals to study, and data used consisted entirely of responses to interview questions posed to executives of those same hospitals. He summarizes, “Look at the appendix survey questions starting from the title in the full report and you’ll be appalled.” (see above sample).