A watchdog group obtains emails from VA officials – invoking the Freedom of Information Act – as they discussed the so-called “Mar-a-Lago crowd” of non-experts who provided advice to the VA with the implied endorsement of President Trump, with much of that involving its contracting with Cerner. 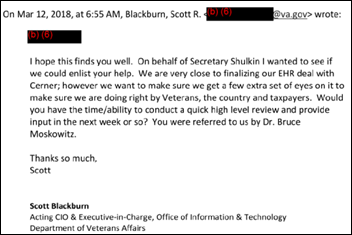 One of the emails contradicts reports that the group’s involvement was unsolicited and that then-Secretary David Shulkin, MD resented it. The VA’s acting CIO asked the group for their help as recommended by Trump associate Bruce Moskowitz, MD, a West Palm Beach internist. 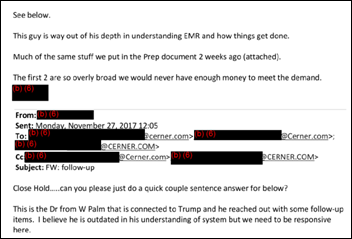 John Windom, who heads up the VA’s EHR modernization project, said a scheduled meeting was a “grin and bear it” session, while that group’s former chief medical officer termed their questions as “ridiculous” and lacking even a basic understanding of systems and interoperability.

Moskowitz emailed to insist that the trio be “on every call that the group is on to discuss the contract.”

One of the released emails contains a detailed list of questions that were posed to the VA in response to Cerner’s RFP in a conference call with the group, with the VA providing detail for such observations such as:

From Grahame Grieve: “Re: Apple Health Records. HIStalk responded to a reader comment in saying that healthcare ‘embraces the most proprietary technology vendor in touting Apple-only patient access.’ I would like to point out that Apple has implemented the Patient API as published in the Argonaut specification, and the same interface is used by other vendors, including AllOfUs, CareEvolution, Coral Health, Ciitizen, 1UpHealth, PatientLink, and many others. While Apple may have business advantages due to their size and significance, any other vendor is able to use the same standard interface, and they are welcome to join with open FHIR community to help them do so.” Grahame is HL7 FHIR product director. A couple of folks offered other reasons that most people can access their health records only if they are among the fewer Americans that use Apple phones instead of Android: (a) Google hasn’t added that capability to Android; (b) Apple must have worked around some Epic licensing issues; and (c) health systems may be reluctant to create and maintain access to their systems for Android. 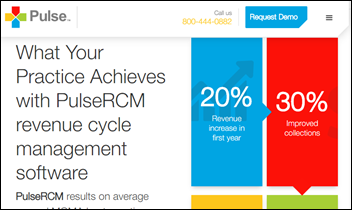 From Alias: “Re: Pulse Systems. Acquired by Amazing Charts, A Harris Healthcare Company, last Thursday. Announced to Amazing Charts employees this week.” Unverified. I ran this as a redacted rumor from another reader on Tuesday, waiting to hear back from my inquiry to a Harris Computer PR contact before naming names (they never did respond). Pulse Systems is (or was, if the rumor is true) owned by France-based Cegedim.

From For Closers: “Re: healthcare sales roles. After years (decades?) of reading HIStalk, I’ve seen several people show up more than once in the People section. Has anyone ever analyzed the number of retread healthcare sales roles? It seem a bunch of folks just flit from company to company to be VP of sales.” Good question, although hard to answer without of LinkedIn digging to (a) find experienced health IT sales VPs, and (b) count how many jobs they’ve had as sales VP (or the trendier chief revenue officer or chief growth officer titles). I’m also surprised at how often a CIO has been burned by a vendor’s oversold product, but then buddies up to the same salesperson who has moved on to another vendor. You might reasonably assume that a relationship history is not a plus when it involves lying and the resulting buyer’s remorse, but CIOs can be like doctors who let drug salespeople pull their strings – they can be manipulated to think that the salesperson is their trusted ally and personal friend.

Lorre asked me what we will do at HIMSS20 now that we don’t have HIStalkapalooza or an exhibit hall booth to deal with. I’m thinking we’ll just cruise around looking for news and rumors, although (a) Lorre could use an exhibitor’s pass if anyone has a spare; and (b) I guess our Smokin’ Doc standee will have to stay home since we don’t have a booth so passersby can take selfies, which is perfectly fine since his box is a pain to cart around.

New Mountain Capital acquires revenue recovery software vendor Ontario Systems, which counts over 600 hospitals among its enterprise healthcare and government customers. NMC has also invested in healthcare companies like Ciox Health, which it acquired in 2014 back when it was known as HealthPort. 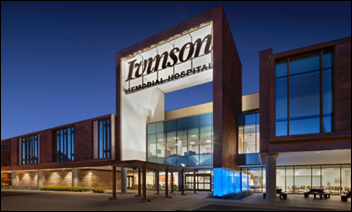 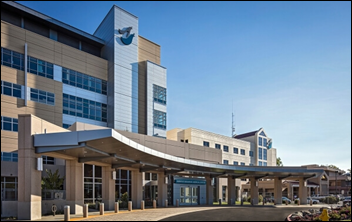 Politico reports that Genevieve Morris will run for office as a Republican in Maryland’s second congressional district. Morris spent a year as ONC’s principal deputy national coordinator and then just two months as the VA’s chief health information officer, a role she relinquished last summer after realizing that her vision for the Cerner implementation differed from that of her colleagues.

The Justice Department arrests five people for stealing millions of dollars from soldiers and veterans by taking photos of their AHLTA EHR screens at at Army base in South Korea, then using that information to log in to DoD’s self-service system, which provides access to 70 military systems with a single username and password. One of those systems stores the individual’s bank account and routing numbers to which government payments are sent, allowing the conspirators to transfer money, sign up for loans, and have VA payments made directly to them. One of the group’s “money mules” was a military dependent labeled as “GH,” who the conspirators threatened for slow payments by looking up GH’s own AHLTA record to find family members they could threaten.

In an interview with Xconomy, John Halamka, MD weighs in on the hype surrounding AI in healthcare, noting that its usefulness will likely come from enhancing behind-the-scenes clinical workflows rather than the more headline-grabbing notion that AI will eventually replace physicians: “Machine learning is very good, but empathy and respect and active listening – that would not be the first use case I would pursue.” 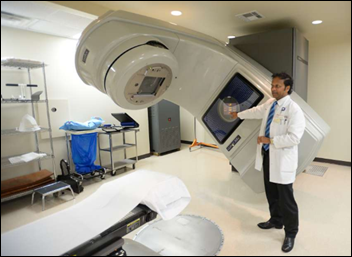 Cancer patients in Port Arthur, TX say they will pursue legal action against the Medical Center of Southeast Texas for abruptly closing a cancer center last year, a development they contend has prevented them from accessing their medical records and continuing treatment elsewhere. The center’s majority owner, Trip Chaudhury, MD, contends the center closed due to a dispute with MCST over repairs that needed to be made, while hospital representatives say the center was closed for non-payment of rent by Chaudhury and that he was (and still is) responsible for equipment maintenance and records access.