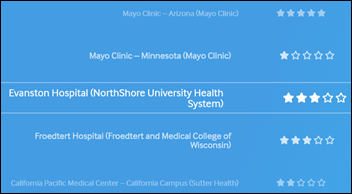 Consumer health data platform vendor Ciitizen rates hospitals on how well they respond to patient requests for copies of their own information.

It’s an interesting idea that isn’t well fleshed out in this initial effort due to a tiny, possibly non-representative sample size and reliance on self-reported hospital policies that were collected via a survey.

This limited information, along with anecdotal stories (such as my own), don’t paint a true picture. I would rather see the federal government (via HHS / CMS / ONC) provide a mandatory records request portal that requires the hospital to log its eventual actions (with timestamps) and allows patients to add comments or complaints. That bypasses the problem in trying to educate masses of consumers about the legal obligations of providers and how to file a complaint when they aren’t met.

Otherwise, hospitals seem happy with their contrived system of paper forms, in-person HIM department visits, faxed copies, and high fees since they don’t really want to share the data of patients anyway due to competitive and malpractice concerns.

From ApplestoApples: “Re: JAMA article on Apple Health Records. It’s Apple-only and the highlighted use of FHIR is irrelevant. The next report should cover providers that offer a published mechanism for any vendor who wants to be a member, given the article’s prediction of an eventual ‘ecosystem’ (that number would be zero right now). Even better, how about limiting it to those providers who make the full EHR record of the patient available as HIPAA requires? Until the right to access records is not just the law and the subject of toothless Office for Civil Rights letters, HHS infographics and YouTube videos but also enforced, FHIR doesn’t matter. But definitely cool that JAMA gave us some pretty underwhelming Apple Health adoption data.” Agreed on all counts. The industry whines about proprietary solutions, then embraces the most proprietary technology vendor in touting Apple-only patient access to a tiny subset of their own Epic-only records (IOS represents less than half the US mobile device market). The article reports that only 0.7% of the patient portal users of the studied health systems have used Apple Health Records. It did not attempt to quantify any outcomes that resulted or the extent of ongoing patient use and for what purposes. I agree that health systems, including the Apple-partnering ones, make it difficult for patients to obtain electronic or paper copies of their complete medical records and HHS does nothing to make them comply with federal regulations. 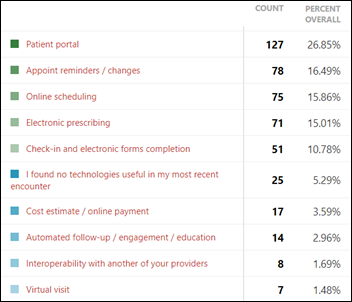 Most poll respondents found at least some forms of technology useful in their most recent provider visit, with the patient portal topping the list and the virtual visit bottoming it. I get the sense that few of us place a lot of value on the IT aspects of our provider encounters, while my previous poll results suggest that even fewer of us – even among my healthcare IT-centric readership who obsess over “Most Wired” type self-stroking awards — choose providers based on the technologies they use or even care one way or another.

New poll to your right or here: How proud are you of the largest healthcare system near you in terms of patient outcomes, community benefit, and financial practices? Click the Comments link after voting to explain.

Activist investor Starboard Value, which scared Cerner into giving it board seats in a “cooperation agreement” in April 2019, has sold CERN shares as the price moves up.

Cape Cod Healthcare will build a $180 million patient tower in Hyannis and will implement Epic. Its most recent tax filings show a profit of $48 million on revenue of $871 million, with the CEO earning $1.6 million and the CIO $367K. I believe Cape Cod Hospital was an original Meditech site going back to the late 1960s, then switched to Siemens / Cerner Soarian in 2010.

Sources report that informatics pioneer Donald Lindberg, MD has passed away. He was a pathologist, former director of of the National Library of Medicine, and the first president of AMIA, having focused on informatics since 1960. He was 85. 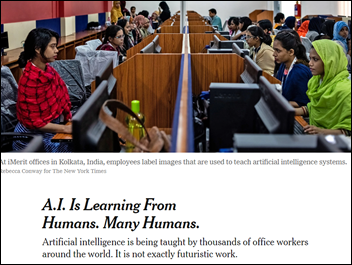 The New York Times profiles the thousands of outsourced workers who sit in cubicles India all day marking up medical images to train AI systems. It observes that the systems they are training may eventually reduce human employment, but in the mean time have created jobs that range from decent to exploitative. One woman’s entire workday was spent listening to recordings of people coughing to help train a diagnostic system.

A commercial construction magazine previews “smart hospitals” that include such technology such as heart attack alerts that are triggered by patient alarms that then call the care team members, detect their locations, and then override elevator settings to get them to the patient’s room quickly. Engineering firms are also looking at ways to incorporate smart speakers.

A Nature op-ed piece says that the AI algorithms touted in research articles aren’t really usable by providers because: (a) they don’t change the incentives that led to optimizing processes for the current state; and (b) individual providers don’t have the technology and expertise to train the algorithms for local conditions and to test for bias. The authors draw a comparison with EHR “data liberation,” which sounds great but doesn’t happen because entrenched players are rewarded by the status quo. It concludes,

Health systems are faced with a choice: to significantly downgrade the enthusiasm regarding the potential of AI in everyday clinical practice, or to resolve issues of data ownership and trust and invest in the data infrastructure to realize it … the opportunity exists to both transform population health and realize the potential of AI, if governments are willing to foster a productive resolution to issues of ownership of healthcare data through a process that necessarily transcends election cycles and overcomes or co-opts the vested interests that maintain the status quo—a tall order. Without this however, opportunities for AI in healthcare will remain just that—opportunities.

An NHS hospital in Scotland apologizes to 400 patients whose discharge letter incorrectly indicated that they have cancer, an error the hospital blames on a computer system switchover.

Vermont State Rep. Ben Jickling resigns his seat (and his golf course day job) in accepting a job offer from Epic. The 24-year-old doesn’t appear to fit the usual Epic profile since he didn’t graduate from the small liberal arts college he attended.

Non-programmers won’t get this: a security researcher who bought a vanity license plate of “NULL” in trying to avoid getting traffic tickets by confusing California’s DMV system gets the opposite result – he has racked up $12,000 in tickets that were intended for other drivers whose tag number was accidentally omitted by the citing officer. The state’s ticketing subcontractor will cancel his individual tickets only if he can’t prove he wasn’t involved, potentially preventing him from renewing his registration. A Wired journalist named Christopher Null says he could have told the man that using the word “null” in any form is asking for problems because poorly tested programming often mishandles it.

A woman who boiled eggs in the microwave as instructed by YouTube videos is rushed to a hospital burn unit when the eggs explode upon removal, causing skin and eye damage that doctors worry could be permanent.