The all-time high for MDRX was in early 2000, with shares since having shed 88% of their value. A $10,000 investment in Allscripts five years ago would be worth $6,456, while putting the same money into Cerner shares then would be worth $12,000 today.

From Imbued Dignity: “Re: patients participating in vendor product design and conferences. Aren’t all of us patients?” We are at one time or another, so “patient” in terms of industry involvement should probably mean “not working in health-related job.” So-called patient advocates (perhaps better labeled as “patient-advocates”) may add some value in hailing from outside the industry  — at least until they make a fill-time job from vendor payments — and may have gained more exposure to our system since they have chronic conditions. We all have our personal expectations and aspirations for healthcare and can obviously see (and say) when they aren’t being met, but we sometimes respond better to heart-tugging or indignation-raising stories about the frequent occurrences of where the system fails. Absent that aspect, we wouldn’t need patient advocates any more than we need advocates for using Facebook or paying the electric bill. The fact that healthcare and health IT executives are shocked, saddened, or motivated by the personal stories of patient advocates means that they are hidden away in their ivory tower. They just need to talk to real people, including their own employees. They also need to retain empathy after the heart-tugging speech is over, which may be their biggest challenge. Healthcare organizations and their executives may express support for a well-told patient story pointing out how the organization failed them, but I’m not too sure they go back home and actually fix the problems. 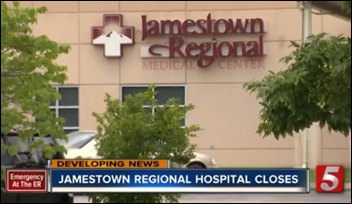 From Craniotomy: “Re: physician assistant buying a closed hospital. What’s your guess as to why?” He got a big-footprint commercial building for just $200,000 in the form of closed Cumberland Regional Hospital, most likely wildly underpriced because it’s located in a rural area where specialized real estate demand and investment money is limited, so he has a lot of options for expanding his own clinic business and bringing in other healthcare tenants. He can also cherry-pick the most profitable parts of the unprofitable hospital’s business – probably the ED, which was also the service most valued by the community – without trying run run acute care or skilled nursing beds. PA Johnny Presley also just offered $1 million for the closed Jamestown Regional Medical Center, which is next door to a clinic he owns. Tennessee is a certificate-of-need state, so he says he will apply to reinstate some JRMC services, such as a freestanding ED, outpatient diagnostic center, and surgery center. It seems that he’s just interested in the real estate and not the hospital or home health license, so hopefully he won’t follow the steps of others elsewhere who made big promises about saving a rural hospital and then used it purely as a billing machine for lab claims that are paid at higher hospital rates. Local politicians are in a tough spot when a hospital closes and thus displaces a bunch of employees who vote, given them obvious urgency to get it re-opened under whatever terms and/or vague promises they can get.

From Exec Checker: “Re: Athenahealth. How much of the executive team remains from its days as a publicly traded company?” Not much. Veritas acquired the company in February 2019 and the eight-member executive team is mostly new – only one member joined the company before 2016. A couple of the execs have some healthcare experience, but the rest (including Chairman and CEO Bob Segert) do not. Here’s your “where are they now” moment looking back a few years vs. LinkedIn now:

From The Usual Usury: “Re: Meditech. You didn’t offer your opinion when the reader asked about what they should do to grow.” That’s a tough one. Their sweet spot is small to mid-sized hospitals that want a proven, functional, full-hospital system whose upfront and annual maintenance costs are a lot less than those of Cerner and Epic. That’s Meditech, but the problem is that those prospects  are either (a) being acquired by large health systems, or (b) are also prospects for running Cerner or Epic as either a remote-hosted or client-hosted service offering, which also gives them easy connectivity to the larger health systems that almost always run Cerner or Epic. That leaves few prospects for vendors like Meditech, CPSI, Medhost, and others no matter what advantages they offer. Meditech is finally moving toward product the market wants – with integrated ambulatory, cloud hosting, and good support for web and mobile – but I don’t have a good feel on how many prospects remain. The other challenge is that while cash-strapped hospitals might save a fortune in maintenance costs switching off Epic or Cerner to Meditech, few of the hospitals that bought and implemented those systems recently are likely to want to start over with another round of disruption, not to mention that hospitals in cost-cutting mode are probably targets for being acquired or marginalized anyway.

From Green Machine: “Re: Cornerstone Advisors. Managing Principal Keith Ryan is no longer with the company.” Keith’s LinkedIn profile says he left Cornerstone in June 2019 after selling the company to cloud managed services vendor 8K Miles in December 2016. He has since turned his 500-acre farm in Tennessee into a hemp and CBD business.

Only a small percentage of poll respondents expect the Cerner-Amazon Web Services agreement to produce much in the way of healthcare innovation. Dan agrees that “Cerner in the cloud” isn’t all that innovative, but believes it may increase CIO confidence that the cloud is viable, provide easier access to data onto which innovation can be layered, and give Amazon direct experience in supporting health IT and HIPAA.

New poll to your right or here: What technologies did you find personally useful in your most recent provider encounter? Click the Comments link after voting and add anything I missed. 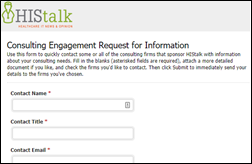 A CIO asked me years ago to create the Consulting RFI Blaster, which provides an efficient, low-friction way to contact multiple firms by completing a single, simple form in which most fields are optional (like if you would rather be contacted by email instead of by telephone).

Listening: angry, dramatic music from Meg Myers, way too dark for one-time spin but loaded with nuance that grows on you.

Nuance reports Q3 results: revenue down 9%, EPS $0.31 vs. $0.28, beating analyst expectations for both. Healthcare revenue increased 2%, although the company’s HIM and EHR implementation businesses underperformed.

CPSI reports Q2 results: revenue down 3%, EPS $0.50 vs. $0.34, missing analyst expectations for both. The company said in the earnings call that customers are taking longer to make decisions and aren’t driven by urgency. It adds that it’s tough selling TruBridge because small-hospital personal connections and community image make it hard for those hospitals to outsource their business offices, while larger hospital prospects are outside CPSI’s client base. CPSI shares are down 12.5% in the past year, valuing the company at $332 million.

Apple healthcare expert and radiation oncologist Andrew Trister, MD, PhD leaves the company after three years to join the Gates Foundation, where he will help US digital health entrepreneurs take their products to the developing world.

Two senior facilities operators go live on Netsmart’s Referral Manager, which they say has decreased their processing time by 73%. The system can be used standalone or integrated with EHRs such as Netsmart MyUnity.

Cybersecurity vendor UpGuard finds an Internet-accessible MongoDB database containing the health records of 37,000 people who had signed up with Neoclinical, an Australia-based clinical trials matching company. Neoclinical did not respond to emails or telephone calls, so public access to the information wasn’t removed until 25 days later. The psychology involved with helpfully telling a company that they are exposing sensitive information is complex, often leading to messenger-shooting.

Lehigh Valley Health Network (PA) admits that an admitted patient’s business partner – a plastic surgeon with whom he was feuding – inappropriately accessed his medical records in Epic. The patient, who is suing the health system, says it ignored his privacy complaints and did nothing for months. Investigation by the health system and the state health department corroborated the patient’s claim. The doctor insists that he had an active patient relationship with the patient, which the health department says wasn’t the case.

In Canada, Nova Scotia closes registration to the MyHealthNS patient portal after McKesson Canada declines to renew its contract due to low registrations under the contract’s pay-per-user pricing model. The government says it will replace the system, which was rolled out in 2017. Less than 10% of doctors have enrolled despite the province’s offer to pay them up to $12,000 per year if they encourage their patients to sign up, respond to electronic messages from patients, and share their test results via the portal.

The president and CEO of Centra Health (VA) apologizes to the community for billing problems that followed its September 2018 rollout of Cerner, which it also blames for recent operating losses. The health system says it spent $65 million on its first implementation phase vs. the $33 million that it originally budgeted under Cerner’s direction, much of that apparently related to the unexpected hiring of hundreds of consultants to train staff. Andy Mueller, MD, who took the top job in May 2019, says in an op-ed piece in the local paper:

I want to talk about one thing many of us in this community have struggled with, and that is Centra’s billing. Transitioning to a new electronic medical record last year seemed to compound an already weak process. From late bills, to incorrect bills to long wait times on hold for customer service — it has not gone unnoticed.  We must do everything in our power to help reduce the stress and anxiety of having to deal with health care bills. Plain and simple, we must do better, and we will. Period. We did not get here overnight, and correcting the system will also not be an overnight achievement. My ask for this community is to bear with us as we get our system corrected. We are working to review each account to ensure we have processes in place to make our billing accurate and more efficient. We’ve also embarked on additional system training and education for our staff. It’s all hands on deck here.

In Australia, Queensland Health Minister Steven Miles says the crash of its behind-schedule, over-budget SAP S/4HANA ERP system right after go-live was caused by user error. He says in response to media reports that it’s not unusual for employees to stockpile inventory or to buy items with their credit cards.

Research by Johns Hopkins Bloomberg School of Public Health finds that independent charities that offer drug co-pay assistance – most of which get their tax-exempted funding from drug companies — usually cover only expensive, brand-name drugs and exclude those patients who don’t have insurance, with the end result most likely being that they increase overall healthcare costs.

Six Philadelphia-area health systems bid a surprising $55 million for the 550 medical residency positions being auctioned off by bankrupt Hahnemann University Hospital. A notable legal objection comes from CMS, which pays more than $100,000 per year for each resident and says it will be precluded from recouping any cost-based overpayments once control is transferred to a different owner.