GAAP earnings swung from a $65 million gain to a $150 million loss quarter over quarter.

The company announced that it has recorded a $145 million Q2 charge to settle all criminal and civil liability related to the Department of Justice’s Meaningful Use investigations into its Practice Fusion unit. 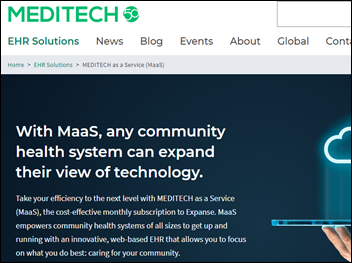 From Considering MaaS: “Re: Meditech as a Service. Now that the first wave of sites has been brought live, I’m curious about feedback. I understand that they are now offering it to community hospitals, so I suspect that the trial run with critical access hospitals must have been successful.” I’m happy to report any firsthand experience reports that are sent my way. 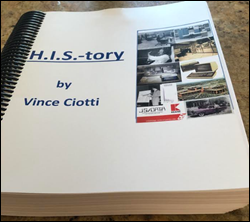 Vince Ciotti surprised me with a spiral-bound version of his HIS-tory series, which while highly useful in its bookmarked, searchable PDF form, is truly impressive as a thick book that makes you realize how much work he put into it.

A Google PR person responded to the reader’s question about the “Google Health advisory board” to which some industry folks list membership. They said Alphabet has a number of groups, but this particular Healthcare Advisory Board was created in 2013 and isn’t tied to a particular product, team, or strategy. They said the group is convened “from time to time,” which I interpret as being rarely since the link provided was some guy’s announcement of being chosen in 2015. I don’t know if this group is connected to the Google Health Advisory Council that was announced in 2007.

CNBC reports that CVS and Walgreens pharmacists are denying prescription transfer requests from PillPack, claiming patients haven’t given their permission to make the change, perhaps after signing up for PillPack’s service accidentally or forgetting they had done so. CVS has told its pharmacists to make sure that people who ask about PillPack are told about similar CVS offerings, while some pharmacists have admitted to throwing away PillPack’s faxed (!) requests. Walgreens, meanwhile, will close 200 stores in the US as part of previously announced restructuring plans.

CVS Health reports Q2 results: revenue up 35%, adjusted EPS $1.89 vs. $1.69, beating expectations for both and valuing the company – including its $70 billion acquisition of Aetna late last year – at $82 billion. CVS shares are down 13% in the past year vs. the Nasdaq’s 2% gain. The company said in the earnings call that it will convert 1,500 locations to HealthHubs in the first half of 2020 after seeing the uptick in Net Promoter Scores and increased store traffic that is driving sales. It is piloting “next best action” programs at its HealthHubs and MinuteClinics to close care gaps and improve chronic care management. CVS will also roll out CarePass nationally, for which members pay $5 per month to get free shipping, access to a 24/7 live pharmacist helpline, and a 20% discount on CVS Health branded products.

HL7 CEO Charles Jaffe, MD announces the 23 organizations that will participate in real-world testing of its FHIR Bulk Data Implementation Guide. Developed with help from ONC and Boston Children’s Hospital/Harvard Medical School, the guide will also be used by CMS as part of its new Data at the Point of Care pilot set to launch next month. 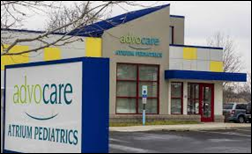 Advocare implements EClinicalWorks across its 200 practices in New Jersey and Pennsylvania. 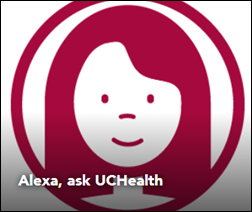 UCHealth (CO) works with AI company Avaamo to develop a virtual assistant skill for Amazon’s Alexa that can help patients find UCHealth providers, facilities, and content. It will soon integrate “Livi” with its Epic EHR and patient app.

In England, Prime Minister Boris Johnson allocates $303 million for the development of a National Artificial Intelligence Lab that will operate within NHSX, the national health service’s digital innovation unit. Initial projects will focus on treatments for cancer, dementia, and heart disease. 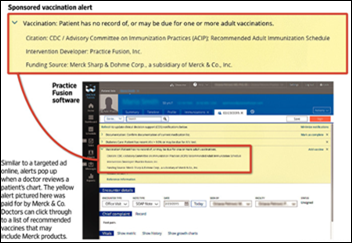 Reuters reports that Merck has received a series of subpoenas related to a federal investigation into an unnamed EHR vendor – presumably Practice Fusion – acquired by Allscripts last year. Practice Fusion teamed up with the drug maker in 2014 to conduct a population health management study on the effectiveness of vaccine alerts within its EHR.

Nashville Public Radio looks at the progress Vanderbilt University Medical Center is making with the development of its VEVA EHR voice assistant. Built on Nuance technology and integrated with the hospital’s Epic system, VEVA is set to go live with a handful of physicians later this month. They’ll initially use it to familiarize themselves with patients before appointments.

It’s early days for hospital interest and investment in AI technologies, according to a survey of 115 hospital executives. Respondents were nearly evenly split with regard to awareness of available solutions and vendors. Twenty-three percent of survey takers plan to invest in AI today, while 50% plan to do so within the next two years. Executives believe supply chain and revenue cycle management, finance, and human resources will benefit the most from automation.

Lawmakers in Australia accuse appointment scheduling app HealthEngine of misleading and deceptive conduct after a news investigation last summer revealed that the company sold or passed user information to insurance brokers and law firms. HealthEngine has also been accused of manipulating patient reviews, and promising its advertisers that ads could be targeted based on user symptoms and conditions. Co-founder and CEO Marcus Tan has assured customers that the company has shut down its third-party referral service and overhauled its practice recognition system: “We are working hard to rebuild the trust we’ve lost with our users.”