Duke Clinical Research Institute will work with Cerner on a pilot project in which de-identified data from University of Missouri Health Care and Ascension Seton will be analyzed to seek insight on the treatment of cardiovascular disease. The resulting Cerner product will be called Cerner Learning Health Network, which will aggregate de-identified patient data from both Cerner and non-Cerner EHRs.

The project’s results  will be published with drug company financial support.

The work will use Cerner HealthDataLab to convert the de-identified patient data into formats that can be analyzed with predictive models and algorithms.

Cerner SVP of Strategic Growth Art Glasgow, who was previously CIO of Duke Health, said in the announcement, “At Cerner, we’re committed to taking four decades of digitized data and transforming it into insights that can help clinicians make more informed treatment decisions. We have an opportunity to use clinical research and data-driven insights to develop an intelligent network of health systems that can truly improve health experiences and outcomes for patients.”” 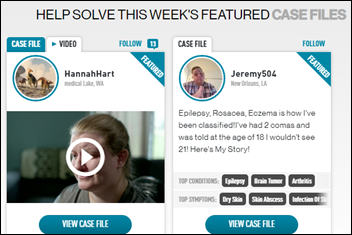 From John R. Brinkley: “Re: ‘Chasing the Cure.’ Any interest in watching it?” The TBS/TNT 90-minute program, which airs live in its Thursday night premiere, features a small panel of doctors that reviews the records of a patient with “unsolvable” medical issues who has submitted their “case file” (a handful of paragraphs of self-description, kind of a Kickstarter for illness, is what is displayed online) ,after which viewers are invited to weigh in using the program’s online community. My reaction: 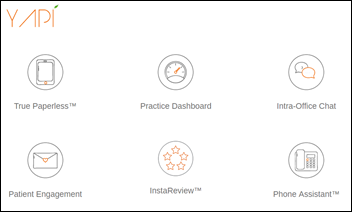 The dental hygienist told me today that she knew that I had arrived for my cleaning and how long I had been waiting because she gets alerts from YAPI, dental practice software that integrates with their Dentrix practice management system. It includes the tablet-based paperless check-in and records update that I had completed upon arrival, a room and patient dashboard that flags patients who are running over or who have waited excessively, team chat, appointment reminders and confirmations, a portal for communicating with patients and checking their appointments, a text message-based review function that routes negative responses to the practice and positive ones to social media, and pop-up patient information displayed with incoming calls from the patient’s phone number. Now I know why I suddenly feel so engaged with the practice, with “send C to confirm” appointment reminders, a follow-up review text message afterward, and not having to explain who I am when I call. 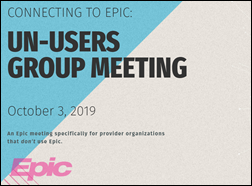 Epic will host its second day-long unUGM in Verona on October 3, where C-suite executives of non-Epic using provider organizations can learn how to connect with their Epic-using peers. Registration is open and costs $100.

Optimum Healthcare IT announces the opening of OptimumTech, a Nashville-based IT staffing division.

Eric Topol, MD says in a New Yorker op-ed piece says that doctors need to organize to push back against EHRs, HMOs, and RVUs to improve burnout. He says, however, that the medical profession has been balkanized by the AMA’s decreased influence as members drop out in favor of joining specialty-specific member organizations. Topol discloses that he’s not paying his American College of Cardiology dues because the organization ignores patient needs, functioning instead as “a trade guild centered on the finances of doctors.” He’s also unhappy that medical associations pursue business themselves – the AMA has endorsed products, the American Heart Association “rents out its name” to use its logo on food products, and the American Academy of Family Physicians took Coke money to fund consumer education about its sugar water (he would have a field day with HIMSS). His overriding point is that medicine is being increasingly run by the non-physician bosses of doctors, as the number of healthcare administrators has grown by 3,200% in the past 40 years. 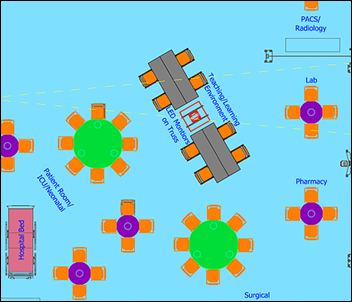 Medical Device Village will open Thursday as part of the Bio Hacking Village of the DefCon cybersecurity conference, expanding from the tableful of medical devices offered in past conferences to a 2,600-square-foot, mocked-up hospital’s radiology, pharmacy lab, and ICU departments full of devices for hackers to attack. A capture-the-flag like competition will be offered and reps from 10 medical device manufacturers will be on hand. The conference also invites attendees to “Bring Your Own Medical Device” for security research.

Psychologists find that while most individuals feel economically threatened when they hear about others losing their jobs to technology, they would actually rather lose their own jobs to impersonal tools like robots and AI instead of having another person take their place. 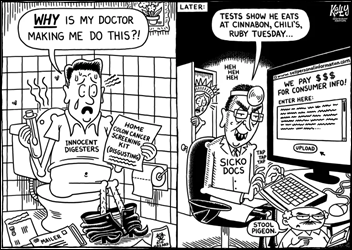 The Onion weighs in on “Data Dump.”