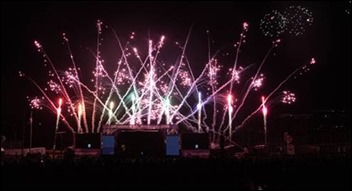 The 24th World Scout Jamboree has come to a close. I’m finally back in the world of hot showers where you don’t have to pull a chain to get the water to run.

The World Organization of the Scout Movement pulled out all the stops on the closing ceremony, including former United Nations Secretary-General Ban Ki-moon as guest speaker. The scouts were challenged to build upon the friendships they created at the Jamboree to work together to tackle major global issues as reflected in the United Nations Sustainable Development Goals: poverty, inequality, climate, environmental issues, peace, and justice. Having now worked with scouts from around the world, it’s clear that on the world stage, scouting is about a great deal more than camping and the outdoors.

The closing ceremony was capped by an outstanding fireworks show that also incorporated lasers and the Novus wristbands I mentioned last week. The wristbands were synchronized to the show, strobing in various colors to match the mood of the music and fireworks. There was music from “Star Wars,” “Pirates of the Caribbean,” “Mario Brothers,” and various world artists.

The only “miss” on the show was the failure of musical guest Pentatonix to deliver a version of “Take Me Home, Country Roads,” which was the unofficial anthem of the West Virginia gathering. It was performed at most of the other shows, including the “basecamp bash” events, which were like going to a nightclub without the alcohol and with the addition of neckerchiefs. It was phenomenal to see young people holding hands and swaying to the music despite the fact that their governments are hostile to each other.

Following the show, many of them pulled all-nighters getting their campsites packed into the three crates that were onsite when they arrived, turning the city of nearly 45,000 campers into a field of pale green squares where tents once were. Then came the parade of nearly 1,000 buses to carry the scouts either back to their homes or to tour the US before returning home.

The Charlotte airport had experienced weather delays the day prior and was quickly overwhelmed by the number of scouts trying to clear through security, particularly at the American Airlines terminal. I was lucky to be on Southwest and had smooth travels, but heard many stories of scouts sleeping on piles of luggage outside the terminals and airline agents who refused to allow scout units to check in as a group, adding to the congestion as they issued baggage tags one by one.

As I waited to board, I received my final email from our medical leadership delivering the tally of medical encounters. More than 13,000 patient visits for issues ranging from sore throats and blisters to fractures to myocardial infarctions and cerebral aneurysms. The Listening Ear mental health providers saw more than 660 visits as well, and we were grateful to have their input on scouts whose stomach aches and headaches were likely a manifestation of homesickness or interpersonal conflict.

I was glad to close the book on the Jamboree’s EHR, which as a clinical informaticist, seemed to me to be over-engineered with simplicity as a goal, but in ways that made it difficult to use if you are technology savvy. One of my colleagues continued to curse it (literally) until the end, even though this was his third jamboree using the system. I suspect he’ll never fall to the adopter side of the equation.

We worked through many technology quirks, including two days with wifi outages that made it unusable and no downtime plan in sight. Not even a printed form we could use. I can’t imagine a modern medical office without even a SOAP note template they could bust out in such an occasion, so that’s an improvement they need to make before doing this again at the US National Jamboree in 2021.

We also ran out of printer ink multiple times, making the required workflow of a discharge document impossible. I quit creating the discharge documents at one point, knowing we couldn’t print them and no one would ever read them, so I wasn’t going to waste the clicks when scouts were queuing for two hours to be seen by a provider.

We also worked through a variety of operational quirks that I hope are addressed in the future. The most major problem at my particular facility was lack of attention to creating the care teams. One of my colleagues even asked, “What’s a care team?” which was not an auspicious beginning. The providers were assigned to teams randomly without regard to their specialties or to their skills or abilities, which were not assessed in advance.

As you can imagine, the pool of providers willing to take off work for nearly three weeks is small and results in a large proportion of clinicians who are either retired or who have been out of practice for some time. Our facility was no exception. I had to teach a neurosurgeon how to treat strep throat as well as how to order meds in the EHR even after he attended more than eight hours of training. I had to remind 18-year-old medical volunteers that they were not licensed in the state of West Virginia to dispense meds or administer IV therapy. As a busy emergency doc who works in facilities that are optimized to the extreme with a staff that is topnotch, it was a struggle.

The Cerner team assisted the medical leadership with analytics, and hopefully they will look at the data for the types of visits seen and supplies used to better provision the medical facilities for the next US Jamboree on this site in 2021 as well as for the next World Jamboree in Korea in 2023.

They are already soliciting medical volunteers for both. Based on some of the challenges as well as the cost (volunteers paid more than $1,700 for the experience, plus travel and lost work time, and the event in Korea is going to be upwards of $6,000) I don’t think I’ll be signing up anytime soon. It truly was a once-in-a lifetime experience and working with the scouts from other countries was priceless. I had return patients from Sweden, Portugal, and Nepal that made sure to follow up when I was on shift so that I could deliver their care, and that was truly an honor. I enjoyed learning about other cultures, scouting around the world, and various healthcare systems in both developed and developing nations.

I am appreciative to my consulting clients who humored me during this hiatus and took my brief and infrequent emails for what they were (exhaustion, lack of connectivity, and being in the middle of treating roughly 1,000 scouts a day at my medical tent). Thanks also to my HIStalk family and to our readers for sharing this adventure.