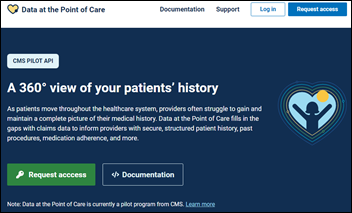 CMS will pilot its “Data at the Point of Care” project starting in September, which will display Medicare claims data to providers via an API.

The pilot project is part of MyHealthEData, led by the White House’s Office of American Innovation under Senior Advisor Jared Kushner. That office, along with HHS, CMS, ONC, NIH, and the VA, launched MyHealthEData in March 2018, which included Blue Button 2.0.

The API is built to the bulk FHIR standard specification that most EHR vendors have been working on. Providers who sign up for the pilot project will ask their EHR vendor to participate with them.

Providers will be able to view their Medicare patient’s visit history, diagnoses, medications, and procedures.

The project will help prove the value of the data, encourage more widespread use of FHIR, and encourage providers to share data once they see that CMS is doing so. Providers will also publish their endpoints in the NPI database, making them accessible to others. 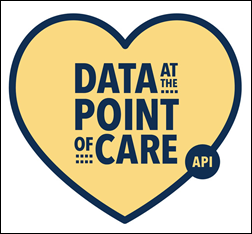 CMS wants you as a pilot site if: 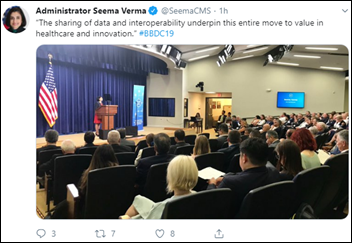 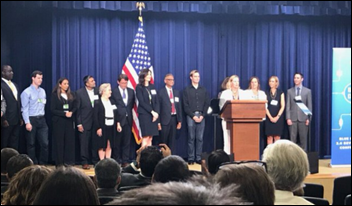 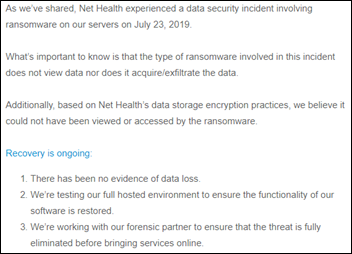 From Bill and Larry Duct: “Re: Net Health. Trying to find out the cause of Net Health’s outage that affects users of its wound care systems, which have been down for 48 hours. Wondering if it’s a ransomware attack?” Net Health told customers in a Saturday morning mail that it was hit by ransomware on July 23, which is a week ago today (Tuesday). The company was unusually forthcoming in describing the incident in detail – it was attacked by Readme ransomware, which it says is not likely to have penetrated its encrypted data. We can probably assume given the extent of downtime that the company declined to pay the ransom.

From Screwy Results: “Re: hospital data. Interoperability is only part of the problem. Hospital records are often just plain wrong and allowing other providers to see them would make that fact obvious.” Indeed they are, and that can’t be fixed by technology tweaks alone. I have zero doubt that if you video recorded a patient’s entire multi-day encounter by sticking a GoPro on their head, you would find that probably that at least 20% of what’s in the chart is wrong, mostly because of poor human documentation due to sloppiness, falsifying entries to cover mistakes, or incorrectly recalling something after the fact. We don’t really want patients snooping around in their chart or detailed bill because that would slow down the widget production line and invite ambulance-chasing lawyers. I don’t know of any other industry that is equally complacent about poor internal documentation, but then again, I don’t know of any other industry that requires so many people to document so much information, mostly to help the hospital get paid rather than to help the patient get well. Maybe someone should turn that GoPro idea into a remote monitoring business, except paid for by the patient or insurer to watch for and prevent the inevitable hospital screw-ups.

Listening: Gary Clark, Jr., who I mentioned in mid-2016 as a great Hendrix-style blues guitarist (with maybe some David Gilmour mixed in.) I Shazam’ed a cool song playing in an oyster bar kind of place and it was him, then heard another cool song and it was him again. He’s not afraid to get angry about injustice and bigotry, which unfortunately in today’s stridently polarized USA means alienating a big chunk of his potential audience who likes it just fine.

As a word usage curmudgeon, I’m curious why restaurant menus went from “sandwich” to “sammich” and now to “sammy” in ramping up the insufferable cuteness while in the process failing to save even a single syllable.

Speaking of word usage, a Google news search for “HIPPA” turns up 14,000 results, including a telemedicine vendor’s press release, a law firm’s blog post, several stories in a health imaging magazine, and CIO magazine. I can understand when a newspaper or non-healthcare site mangles a sounded-out HIPAA, but a healthcare site should know better. “HIMMS” also makes quite a few appearances on health IT sites (even 28 times on its own HealthcareITNews.com site). It’s not pointless criticism – can you trust a health IT site whose obviously inexperienced folks don’t instantly notice that HIPAA or HIMSS is misspelled?

Surescripts complains to the FBI about data vendor ReMy Health, which it says is sending Surescripts-owned patient prescription histories to Amazon’s mail order pharmacy PillPack without its authorization. Amazon threated last week to sue Surescripts – which is partially owned by PillPack competitors CVS and ExpressScripts and is being sued by the Federal Trade Commission for operating what it says is an e-prescribing monopoly – for revoking access to the patient history data. Surescripts says its contract with ReMy Health allows it to only provide medication histories to doctors who are providing inpatient care. It also claims that ReMy Health and used fraudulent National Provider Identifiers to hide its actual customer. Surescripts says PillPack violated the trust in its network and is threatening patient privacy, while a PillPack spokesperson said in a statement, “Given that Surescripts is, to our knowledge, the sole clearinghouse for medication history in the United States, the core question is whether Surescripts will allow customers to share their medication history with pharmacies. And if not, why not?”

Bain Capital will sell a majority stake in revenue cycle management technology vendor Waystar to a Sweden-based private equity group and Canada Pension Plan in a deal that values the company – formed in 2017 by the merger of Navicure and ZirMed — at $2.7 billion. 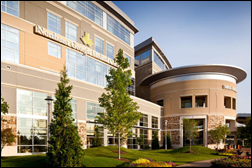 The White House said Monday that it will force hospitals to publicly disclose their negotiated insurer prices via a proposed federal rule that would take effect in January. The AHA responded by saying, “This is not the information that patients want or need,” while American’s Health Insurance Plans predicted that such action would “push prices and premiums higher.” Hospitals that fail to post their contract prices online could be fined up to $300 per day, a paltry $100K annual cost of business for keeping prices secret. CMS Administrator Seema Verma, questioned about the White House’s authority to issue the requirement without the involvement of Congress, cited a provision in the Affordable Care Act, which the White House has attempted repeatedly to overturn. A recent attempt to force drug companies to include prices in their advertising was shot down quickly as exceeding the President’s authority; the White House killed its own proposal to eliminate drug companies paying rebates to pharmacy benefit managers for fear of increasing Medicare premiums in an election year; and a proposal to eliminate “surprise billing” for out-of-network services seems to be going nowhere. It’s tough to beat deep-pockets industry players who have the country’s best lawyers and influential politicians on speed dial ready to derail any efforts that would threaten their golden goose, especially when trying to do it from the White House instead of the Capitol.

Sunday is Meditech’s 50th birthday, as the company was founded right after the moon landing on August 4, 1969. Learn more on Meditech’s website or from Vince’s HIS-tory series. Celebrating 40th birthdays this year are its competitors Cerner and Epic, which were founded in 1979.

The Tampa newspaper highlights the rapidly increasing number of patient lawsuits being filed by Bayfront Health St. Petersburg after its purchase by a for-profit hospital chain, which is happy to take advantage of Florida’s unique law that allows hospitals to file a lien on the assets of patients if they don’t pay their hospital bills. 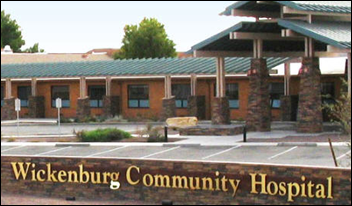 Arizona Republic describes how the four IT employees of Wickenburg Community Hospital rebuilt its systems after a ransomware attack last month, restoring them on the Monday morning following the Friday morning attack. Interim CIO Blue Beckham says that every system went down, leaving only “the ability to turn on a computer and get on the Internet,” presumably to pay the demanded ransom (which the hospital didn’t do due to both the principle and the principal). The hospital had just ordered a disk-based replacement for its old tape backup system, which arrived a few days afterward. Beckham says “our response and our recovery would have been 200 times better and faster” had it been installed in time.

Aetna (or more specifically, people who pay Aetna health insurance premiums) changes its mind after negative press reports, announcing that it will now cover the cost of the world’s most expensive drug, which costs $2.1 million per treatment for children who have a rare muscle disease. The drug’s development was funded by NIH and charities. Business Insider ran stories on the patients whose requests had been rejected, with the publication’s editor-in-chief abandoning all pretense of objective journalism in triumphantly tweeting about the “unbelievably good news!” I would be more sympathetic to the “quality journalism isn’t fake news” argument of news sites if they would lay off the editorializing, write stories based on their news value rather than as a personal platform, and stop running clickbait stories that are designed to mindlessly entertain rather than to thoughtfully inform. Our country is screwed if Jefferson was right and its survival requires an educated citizenry. But on the other hand, I admit that I don’t understand how humankind has decided that single-digit aged kids should make double-digit millions each year by posting funny YouTube videos of themselves playing with toys.

In England, NHS may be forced to pay millions of dollars to medical residents after a software bug allowed them to be underpaid them for shifts in which they didn’t take the mandatory 30-minute break every four hours.

The New York Times points out the problems involved with using a newly developed EHR data mining algorithm that can accurately identify men who are at high risk of contracting HIV. It notes that doctors are often clumsy when talking about sex and that patients may resent the intrusion into their sexual practices. It mentions a patient who was told by his doctor to “have less sex” when he asked for a prescription for HIV-preventing drugs, only to test positive for HIV two weeks later.