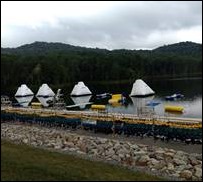 It’s another beautiful morning in West Virginia and I was able to see the calm before the storm at the aquatics area.

A fresh team from Cerner has arrived to support us through the end of the Jamboree. Working with physicians and nurses from across the country and around the world has been a great experience. The Cerner team has really gotten into the scouting spirit, with custom Cerner badges and pins to trade with the medical teams.

Since we’re partway through the Jamboree, some of the other EHR realities have come into play, including reports that show that some providers aren’t completing their notes as timely as everyone would like. In that regard, it’s not a lot different from a traditional practice. We also had some new providers arrive to help us finish out the week, and I got to spend some time as a super-user helping a subspecialist through his first shift.

It’s been great interacting with providers from around the world. During a cold snap, we learned about manual massage techniques used in Europe to warm hypothermic patients. We also learned about their method for performing CPR vs. how it’s done in the US. We’ve had some good discussions about single payer and government-based healthcare and how rationing does or does not occur in other countries.

The international providers were fascinated by some of our discussions around Meaningful Use and MIPS, when we were talking about the government requirements for providing printed visit summaries. Fortunately, here the only reason we need to provide written summaries is so that the patients know what to do in follow up. I’m glad the EHR offers instructions in multiple languages as well as easy-to-read versions given the fact that we are dealing with teenagers. It’s good since we are treating patients whose parents aren’t here and who are from other countries. I also learned a little more about how our system interoperates with the local hospital when we have to do transfers for patients who need a higher level of care.

Friends at home have asked me what the biggest challenges are with treating an international population. There are some obvious things like spoken language and medications having slightly different names on the world market. One less-obvious thing is how the EHR handles special characters used in many patients’ names. Attendees completed health history forms when they registered for the Jamboree and much of that information has been imported into our EHR. However, many of those characters have been replaced by placeholder characters, which can make it tricky to search for patients if they’re not wearing their ID badge with their registration number.

For the most part, the data that has been flowing into the EHR has been accurate. I understand from talking to one of the back-end IT personnel that it was a big challenge to merge it in from its native data source, but that they were committed to getting it done right.

AT&T has done a phenomenal job with the WiFi capabilities at The Summit, and we’ve had good coverage not only in the medical areas, but also while we roam thousands of acres of program areas. The Scouts are using a variety of social medial platforms, including a game called Novus that allows them to connect with other attendees using a wristband and then see contact information in their Jamboree app. Participants can get prizes for connecting with attendees from different countries and also for visiting various program areas and clicking their Novus devices.

The highlight of the week was Thursday, when all of the program activities — including the zip lines, scuba pools, paddle boarding, and swimming areas — were closed. Participants were encouraged to cook their traditional foods and wear traditional dress, and walking through the camp was like taking a trip around the world. I sampled spicy chicken from Trinidad and Tobago, fizzies from South Africa, Inca Cola from Peru, a German sausage stew, and some delightful sugared pancakes from The Netherlands (they reminded me a lot of beignets in New Orleans, proving again that that world is perhaps a bit smaller than we think).

We were able to partake of traditional Peruvian dance, a sauna from Finland, salted licorice from Sweden, tea and steamed pudding UK-style, and both Marmite and Vegemite. Then it was back to work to see patients who had a bit too much sun and perhaps more variety of foods than they were used to.

I only have a handful of shifts left before I head home. I have to say it’s been quite an experience. There have been challenges in delivering care in a rugged environment and also in standing up multiple health centers that are only going to run for a couple of weeks. The EHR has performed like a champ, but I suspect I might be a little more tolerant than some of the other users I hear grumbling from time to time. You’d hear that at any healthcare facility, however.

Tomorrow I have a rare day off and am going to spend it whitewater rafting in the New River Gorge. Rumor has it that the trip we’re going on has a couple of Class 4 and Class 5 rapids. I’m a little nervous about that since I’m used to water that’s a little more flat and navigated in a canoe, but I’m open to the adventure.

If you could visit any country in the world, where would you go and why? Leave a comment or email me.