The Federal Communications Commission (FCC) approved a proposal creating a $100 million fund for telehealth, targeted to reach low-income and rural Americans. The so-called Connected Care Pilot Program would help providers offset the costs of broadband service to help low-income patients and veterans access telehealth services. The fund is designed to cover a percentage of internet connectivity costs for organizations agreeing to participate in the pilot. The FCC is receiving public comments on the proposal, which is specifically designed to increase use of remote patient monitoring services and virtual care.

Earlier this month, National Public Radio did a story on the role of telehealth in rural communities. Profiled services include California Medicaid’s video counseling sessions, which can dramatically reduce the backlog for behavioral health services. A recent NPR poll showed that 25% of rural Americans have used some kind of telehealth services in the last few years. Although some rural telehealth models include patients visiting a local clinic to confer with a subspecialist hundreds of miles away, others rely on the patient having broadband connectivity at home, which is a limiting factor for up to 20% of rural residents. The piece also illustrates the often undocumented costs of rural patients having to drive hours for care – missed work, hotel stays, and childcare. Payment for certain telehealth services continues to be an issue, so we’ll have to see if the funding can keep up with the demand.

I was disappointed to see that a US judge struck down a recent rule requiring pharmaceutical manufacturers to disclose drug pricing in their TV advertisements. The rule would have required wholesale pricing data to be included for consumers to better understand the relative costs of therapies being promoted. Not surprisingly, drugmakers Merck, Eli Lilly, and Amgen were behind the challenge. Although I agree with the ruling that the Department of Health and Human Services doesn’t have the authority to force manufacturers to disclose pricing, I’d love to see Congress make this a reality. Some of the most commonly advertised medications have prices from $500 to $17,000 per month, which shocks patients when they come in and we have to explain why we’re not going to prescribe them.

After spending time in the hospital with a relative, I was glad to see this article on alarm fatigue in hospitals. Clinicians, psychologists, musicians, and designers are working to make alarms that are less jarring and more helpful. Alarms have been linked to patient confusion and staff anxiety as it is difficult to know whether alarms are legitimate or false alarms. I was surprised by the statistic that from 2005 to 2008, more than 500 US patients had adverse outcomes (including death) from alarms that were ignored, silenced, or otherwise mismanaged. A working group aims to develop an alarm standard with more pleasant alerts than those currently in place from the International Electrotechnical Commission.

Random statistics of the week:

Allscripts and Microsoft have agreed to team up to promote EHR data sharing. Users of Microsoft HealthVault will be able to use the Allscripts FollowMyHealth patient portal to move EHR data to family and home care teams. HealthVault will be retired on November 20, 2019 and users can move their data any time before then. The FollowMyHealth app is available for both IOS and Android.

If you haven’t completed the transition to the new Medicare Beneficiary Identifier, you’re running out of time. After January 1, 2020, claims with old patient identifiers will be rejected. As of the week ending July 5, providers submitted 76% of all fee-for-service claims with the new MBI.

Since I’m spending the rest of this month with the young people of the world, I was interested to see these statistics on worldwide vaccination rates. The World Health Organization notes that more than one in 10 children – or 20 million worldwide – missed out last year on vaccines against life-threatening but preventable diseases such as measles, tetanus, and diphtheria. Vaccination rates are slowing in poor countries or those with ongoing conflict, resulting in a loss of the herd immunity effect where high vaccination rates provide protection for those who might not be vaccinated. Measles is booming in the US due to under-vaccination and worldwide cases topped 350,000 last year. 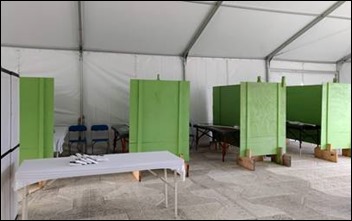 For those of you interested about my medical volunteer adventures, there have been some ups and downs with the deployment of the EHR. They broke out a ton of laptops, a forest of extension cords (fire marshal beware), and some clinical scenarios, but 20+ care teams were using the same scenarios and  test patients, so we were documenting all over each other. Kudos for drawing those scenarios from real patients at the last National Scout Jamboree in 2017, but they weren’t delivered to us in a facility-specific, way but rather to all the medical people together. My team spent a long time figuring out how to order x-rays only, to be told later in the day by our chief medical officer that we would not be ordering x-rays since only the downstream facilities did that — we just needed to put it in our discharge instructions. In defense of the Cerner team, they were also working with a multicultural, multinational team that hadn’t yet been assigned to care teams, so in some ways we were a little off kilter ourselves.

Still, we made it through, and Cerner was kind enough to come to our facility and offer some refresher training to make sure we are ready for when the world arrived. I am having a great time getting to know my team – nurses from Sweden, Austria, and the Netherlands along with nursing students from West Virginia University. They’ve been teaching me about healthcare in their countries and we’ve all been teaching the student nurses (and the Cerner trainers) about the scouting movement. The latter were especially impressed at our ability to quiet a room full of contentious physicians simply by raising three fingers into the air. I doubt they’ll be able to use that on their next training audience.

Some of the Cerner team members are serious scouters and I had the chance to talk in depth with one of them today. She’s staffed several prior Jamborees and knows how they work and how to talk physicians off the edge, which apparently has happened a couple of times this week. As much as the Scout motto is “Be Prepared,” some of the physicians didn’t do their advance training and are a little behind the eight ball. The trainers are staying in tents and hoofing it to work every day just like we are, so we’re starting to build a bit more camaraderie.

It was impressive to see what had to be more than 1,000 charter busses pour into the Jamboree over a 36-hour period and watching open fields turn into seas of tents. Our patient panel includes more than 7,700 youth from 75 countries. I worked my first night shift last night after the opening ceremony, which brought a sea of 50,000 people scattering back into six basecamps. I rendered some postoperative care to a patient whose visit to the US involved the removal of his appendix on the way to the Jamboree, which although within my scope of practice, was not something I expected to see. We also had a brush with hypothermia this morning as overnight temps dipped into the 40s F. I learned that the M997A3 Tactical Humvee Ambulance is not only rugged but warm and the National Guard was a godsend for my patient at 5:30 a.m.

After my post-call nap, I hit a couple of continuing education sessions on orthopedic trauma and wilderness first aid / evacuation.

Today marks my 900th post for HIStalk and I appreciate all of your support over the years. Thank you for sharing my adventures both inside and outside of the hospital.