Health Catalyst revises its IPO filings to increase both the number of shares and the planned share price range, now valuing the company at just under $1 billion.

Some of the significant shareholders, with shares priced at the upper end of the price range:

An interesting footnote discloses that the company paid just $2.3 million to acquire money-losing Medicity and its 60 customers from Aetna in June 2018, which Aetna had acquired for $500 million in early 2011.

From Reeking Havoc: “Re: salespeople. I posit that it’s all about the hair.” I won’t rise to your generalization bait, but I acknowledge that salespeople often have remarkable hair and teeth. I think I could pick senior salespeople out of a lineup nearly 100% of the time. I don’t know whether great-looking people are more likely to succeed at sales (which I suspect) or whether they just pay more attention to their appearance than we IT and clinical geeks who don’t have to (and usually don’t) make an immediately positive first impression to avoid employment Darwinism. 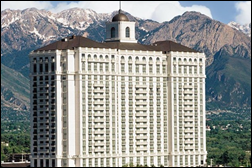 Health Catalyst’s Health Analytics Summit is coming up in September in Salt Lake City, which reminded me that I attended several years ago. It had great speakers, a fantastic hotel at a shockingly low room rate, and an Apple-like cool kids tech vibe. On the agenda this year are some names I know: Lyle Berkowitz, MD; John Halamka, MD; Jefferson Health CEO Stephen Klasko, MD; and former Epic CFO and now-software CEO Anita Pramoda. Also speaking is data democratization company founder Justin Aronson, who is a high school sophomore. This isn’t a paid plug or anything (which should be obvious since I don’t do that), but I was just having fond memories of seeing the surprisingly healthcare-relevant “Moneyball” baseball manager Billy Beane speak there back in 2014, still my favorite presentation from any conference I have attended.

Medicare Advantage insurer Essence faces a whistleblower lawsuit and CMS review after an HHS audit finds that the company and its local provider partners inflated patient risk scores – and thus their Medicare payments – by using data mining software provided by Essence-owned Lumeris to identify patients who could be billed higher “enhanced encounter” rates. HHS found instances where patients with old strokes were falsely documented as having had recent ones and patients whose minor depressive episodes were labeled as major. The partner hospital that was involved told the doctor who complained in the document above that many insurers – not the hospital itself – are identifying care gaps and paying providers to close them, placing “millions of dollars at stake based on on our performance across a range of quality metrics.” Lumeris recently signed a 10-year, $266 million deal with Cerner to launch Maestro Advantage, a technology and services package that targets the Medicare Advantage and provider-sponsored health plans market. 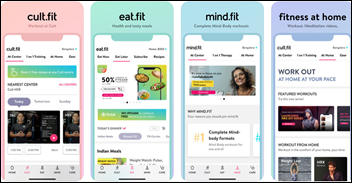 India-based startup CureFit, which hit $100 million in annual revenue within its first three years, says it will be a billion-dollar business by 2022, will expand to other countries, and will then go public. The company offers app-supported delivered meals (the murgh khurchan with rotis, which I like a lot, looks especially good) , group exercise programs, yoga classes, and medical and lifestyle consultations. The company, which will expand to 800 centers in 50 centers by next year, is happy with its subscription model and thinks it can increase annual per-customer spending from $350 to $1,000. It will soon offer energy bars, wellness, skin and dental services, its own line of shoes, and wearables such as watches and heart rate monitors. 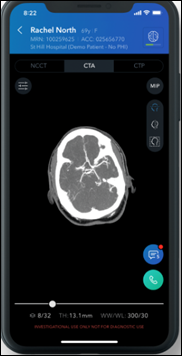 Medical device maker Medtronic will distribute AI-powered stroke detection imaging analysis software from Viz.ai. The CT-connected software quickly identifies large vessel occlusion and sends images to the smartphones of stroke specialists to reduce door-to-needle time. Viz.ai was founded in 2016 and has raised $31 million in funding, most recently in its Series A round a year ago.

Meditech offers its customers a one-year free membership in CHIME.

PatientPoint launches a location-based mobile patient engagement program to target patients sitting in a waiting room with local news, weather, and games along with patient education.

Rhapsody releases the first version of its flagship interoperability product since the business was divested by Orion and merged with its private equity acquirer’s competing vendor Corepoint Health.

AHIMA and CHIME co-hosted a congressional briefing Monday that urged the Senate to support a House resolution that would repeal the longstanding ban on using federal money to adopt a national patient identifier. Repeal of the ban would allow HHS to work with the private sector in creating a unique identifier. CHIME offers a form letter for members to use in contacting their Senator to voice their support. 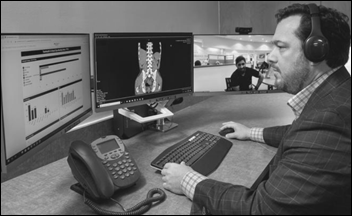 The Baltimore business paper describes LifeBridge Health’s newly launched virtual hospital, led by ED doctor and CMIO Jonathan Thierman, MD, PhD. The center handled 1,000 cases per month in its pilot. It’s being used it to connect with paramedics responding to calls, patients in their homes, and patients in affiliated facilities. The virtual hospital routes routine calls for questions, follow-up, and prescription refills to call centers in Israel and the Philippines that employ Maryland-licensed nurses. Thierman is impeccably credentialed – he has a Harvard BS and MD, an MIT PhD in engineering, and has invented several medical devices. 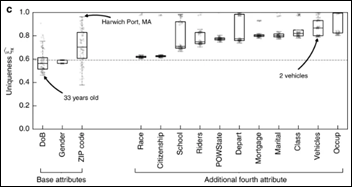 Researchers find that 99.98% of the people whose information is stored in a de-identified dataset can be re-identified using 15 demographic attributes, calling into question GDPR requirements and the legal adequacy of the “release and forget” model of de-identification. In other words, just about anyone with modest skill who has access to databases stored by governments and corporations can re-identify nearly every patient in a de-identified database.

A newly published study finds that doctors aren’t much better than anyone else in getting only high-value care, taking their medications as prescribed, and receiving recommended vaccinations. The authors therefore suggest that patient awareness and education campaigns aren’t likely to improve quality or reduce cost.

Former Sutter Health IT Chief Operations Officer Stuart James sues the health system, claiming it wrongfully terminated him after a May 2018 system-wide computer failure and then defamed him by naming him — along with SVP/CIO Jon Manis and IT Director Randy Davis — as being let go because of the downtime. James, who says he can’t find a comparable job after being fired, claims he was targeted because he told an investigator after the incident that management should have followed his recommendation to install an EHR backup system. Sutter said the downtime was caused by an unintentionally activated fire suppression system that shut down its data center for 24 hours. 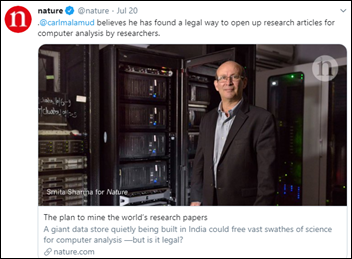 American technologist Carl Malamud and his India-based team are working to free scientific knowledge that lives behind for-profit journal publisher paywalls. They have built a database of 73 million journal articles without the permission of those publishers, hoping to get around copyright issues by not allowing people to read or download the articles directly, but instead displaying their key insights as extracted by software. The group’s servers are in India, whose law allows such activity for non-profit research purposes.

Critics question whether it’s ethical for drug companies to use the genetic information of paying customers of 23andMe to discover new drugs, noting that consumers probably aren’t aware that their data is being used in for-profit collaborations and they won’t get a discount when new drugs hit the market as a result. Drug maker Glaxo, which took a $300 million stake in 23andMe last year, says drugs based on genetic information are twice as likely to succeed in clinical trials. It also plans to use the platform to recruit clinical trials subjects. 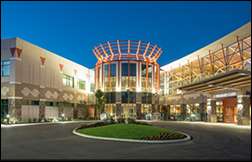 Kaiser Health News describes the innovative hospital operated by the Eastern Band of Cherokee Indians in North Carolina, which used its casino profits to opt out of the drastically underfunded Indian Health Service and instead create an integrated health model that serves as “a medical home for our people.” It follows the patient-centered, Baldrige-winning Nuka System of Care. Being outside IHS, the hospital can also bill Medicare and Medicaid.

Former LSU EVP Frank Opelka, MD says his former employer is falsely blaming him for a failed and potentially improper business deal in which LSU-developed CLIQ  – population health analytics software created by the IT group of LSU’s hospital division – was licensed directly to a private company LSU had created. LSU was worried that state government would use the expected proceeds elsewhere, so Opelka was tasked with figuring out how to keep the money within the university. He says LSU’s administrators and lawyers, not he, came up with the public-private partnership structure without the approval of LSU’s Board of Supervisors, but LSU’s president blames Opelka as a rogue operator who exposed the university to conflicts of interest. State auditors also noted that the CEO of LSU’s healthcare division, Wayne Wilbright, MD – who in his previous role as CMIO led the team that created CLIQ – was involved in transactions that supported its commercialization despite the potential that he would received royalties as a result. 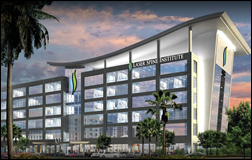 Healthcare in America: the Tampa newspaper chronicles the bankruptcy of the 500-employee, now-closed Laser Spine Institute, which was formed by two doctors who had left a similar minimally invasive spinal surgery company and then paired up with an investment firm to open LSI, whose revenues rocketed as the business expanded to four states. Their original partner sued LSI, claiming that the new company stole his business plan and his entire surgical team. The two doctors appealed the first jury’s award of $1.6 million, the award was then raised to $6.85 million on appeal, and then they made a big mistake in appealing yet again, resulting in a $260 million award to their former partner nine years after the first trial. LSI borrowed $150 million in 2015 despite its annual revenue of $268 million, with the former partner’s lawsuit alleging that executives simply pocketed $110 million of it for themselves and shareholders.

Systems at Springhill Medical Center (AL) remain down after what an anonymous employee claims is a ransomware attack. The hospital’s website is down, they haven’t updated their Facebook page, and they aren’t responding to media inquiries. 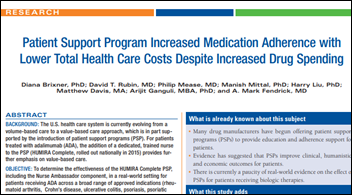 Sega Europe and Two Point Studios announce the gaming console version of Two Point Hospital, where players assume the role of “the hospital administrator” in “demonstrating your ability to build, cure, and improve in the hardest and strangest circumstances,” such as having the ED overrun with Freddie Mercury impersonators (note to HIMSS20 exhibitors – this might make a fun giveaway).