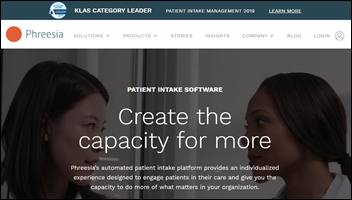 Phreesia shares rose as much as 53% from their opening price of $18 on their first day of trading on the NYSE Thursday, closing at $26.75.

Most of the 280 respondents to last week’s poll saw at least some aspects of their lives improve compared to five years ago, most commonly wealth (around 60% of the total respondents), happiness, and level of relaxation. Few of them, however, are healthier or more optimistic. 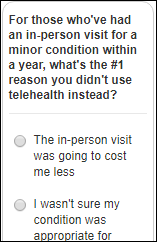 New poll to your right or here: for those who’ve had an in-person visit for a minor condition within a year, what’s the #1 reason you didn’t use telehealth instead? I’ve never had a virtual visit, partly because I haven’t needed one, but also because I can call or text the cell number of my $70 per month concierge MD at any time. I’ve called a couple of times for issues other than prescriptions (which he sells at his low cost) – once for a sudden allergic reaction to something and another for a one-and-done toe swelling, both of which were managed well with a short course of prednisone after I texted him a photo. 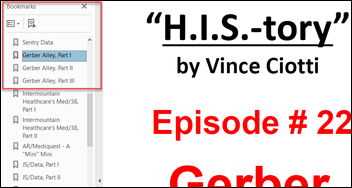 I added bookmarks to Vince’s HIS-tory series, allowing the reader to click on each chapter’s title to jump directly there. That gives three ways to use the PDF document – page through it like a book, use the bookmarks as a clickable table of contents, or perform a full-text search of the entire 1,438-page file (it works best to download the file, then open in a PDF reader rather than working directly in your browser). I also appended the history of HIMSS as created by the HIMSS Legacy Workgroup in 2012 and not updated since, just to make sure that document isn’t lost forever. I haven’t used a PDF writer tool for a long time, so I was happy to find PDF Architect, which worked flawlessly for this little project with zero learning curve. It contains many options I didn’t need (direct PDF editing, document conversion, inserting images and links, rearranging pages, etc.) but it’s still a good deal —  I paid $36 for a one-year personal subscription versus the $156 per year for Adobe’s product.

Welcome to new HIStalk Platinum Sponsor Get-To-Market Health. The Malvern, PA-based consulting firm helps health technology businesses accelerate their sales and drive their revenue growth by coaching them through this market’s rapidly changing complexity and unique buying patterns. The company’s experts have redesigned sales organizations, developed market entry plans for big companies, created partner channel strategies, and coached and supported chief commercial officers. They will also help potential investors perform due diligence and craft plans for rapidly growing the business. The principals are industry long-timers Steve Shihadeh, M.P. Brock Zimmerman, and Paul Mattes. They bring deep connections in health systems and vendor organizations when specialized expertise is needed. I read through some of the company’s excellent blog posts and call to your attention this information-packed and highly relevant one: “Surviving and Thriving in an Epic and Cerner-Dominated Health Information Technology World.” Thanks to Get-To-Market Health for supporting HIStalk.

Amazon threatens to sue Surescripts over threats to revoke its mail-order pharmacy’s access to patient medication lists. Prescription integration automation vendor ReMy Health – which provides API access to modified Surescripts data – says it will no longer work with Amazon-owned PillPack. Surescripts, which is partially owned by Amazon competitors CVS and Express Scripts, says it has no signed patient privacy agreement with PillPack. Without access to Surescripts data, PillPack’s pharmacists would have to call each patient to ask about conditions and medications before dispensing their medications. The management team of ReMy Health, which was founded in 2013, is made up mostly of former Allscripts executives. 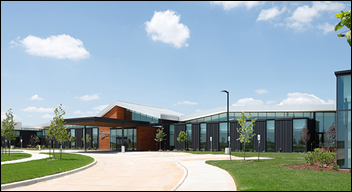 The Patterson Health Center – mostly funded by a $35 million donation by The Patterson Family Foundation – opens (Monday) in Harper County, KS, the birthplace of the late Cerner co-founder and CEO Neal Patterson. The 62,000-square-foot hospital sits midway between two small towns whose struggling hospitals were consolidated into the new one. The facility includes a 16-bed critical access hospital, a clinic, a physical therapy and rehab center, and a wellness center. Technologies include electronic registration, digital patient tracking, telemedicine for remote specialist consultations, automated medication dispensing cabinets, and modern imaging systems. Health Center Chairwoman Martha Hadsell says, “Neal gave us a voice, and when you’re in rural America, sometimes you don’t have a voice. He gave us a facility to really experiment and try out new ways to deliver healthcare in rural America.”

A Tennessee Senate task force will review EHR use in the state, with its new chair promising to find ways that hospitals can use them more effectively in contrast with the false promises that were made when they “were first introduced by the Obama Administration 10 years ago.” Sen. Todd Gardenhire – a 71-year-old wealth manager who, like all five task state Senate force members, is a Republican – says he will study hospital EHR vendor contracts and determine whether EHRs enable Medicaid fraud.

A US psychiatry resident writes in Scientific American that China’s overloaded psychiatric services may provide the incentive for virtual reality-powered psychiatry to leapfrog into mainstream acceptance, citing as an example VR applications that could take people through fear-inducing situations to condition them. China has too few mental health professionals and the people who seek them out are sometimes subject to humiliation or even treatment as criminals. 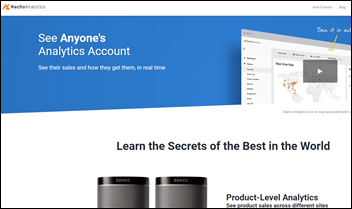 Athenahealth and Epic are named as being among the companies who had information from their systems found to have been exposed by spyware that is contained in several browser extensions. Experts found that companies that rely on unpublished URLs to hide sensitive data are vulnerable to Dataspii, which developer Nacho Analytics calls “God mode for the Internet.” The original researcher found home security system videos, Intuit-hosted tax returns, vehicle buying information, patient information from DrChrono and other health IT vendors, itineraries on travel sites, and Facebook Messenger attachments and Facebook photos. I would be surprised if any health IT vendor relies purely on a complex URL to hide patient information, so I’m interested in learning more. 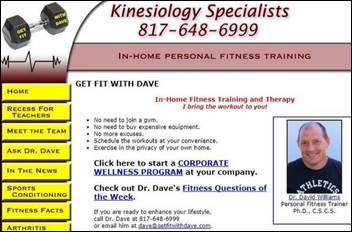 ProPublica finds that the federal government doesn’t check applications for National Provider Identifier (NPI) numbers for accuracy, making it easy for just about anyone to obtain one and then file false non-Medicare claims with insurance companies. A personal trainer called “Dr. Dave” flooded insurers with out-of-network claims for personal training sessions labeled as medical services under the assumption that the companies would blindly pay some of them and he was right – he billed $25 million and pocketed $4 million in cash, much of that after he had been caught multiple times. Experts use the phrase “pigs get fat, hogs get slaughtered” in recognizing that insurers don’t really care about most fraud since they simply pass those costs along to employers and policyholders, going after only the most obvious claims data outliers. 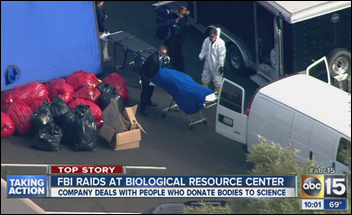 Court documents spell out what FBI agents found in their 2014 raid of an Arizona body donation business — piles of unlabeled body parts, a large torso with a smaller head “sewn together in a Frankenstein manner,” and a bucket filled with male genitalia. The state doesn’t license donation centers, although the high-school educated owner (whose last name is, remarkably, Gore) says he should have told families that while their donation provided free body transportation and cremation, the deceased person’s body would not be used for educational purposes but would instead be broken down into parts that would be sold to anyone willing to pay prices ranging from $375 for a knee to $2,900 for a headless body. The civil lawsuit that has been brought by 33 plaintiffs against the former owner Mr. Gore, who walked away with probation in his criminal case, kicks off in October.