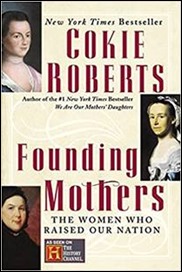 I was off the grid this week doing some volunteer work. Since I sent Mr. H my posts in advance, I failed to notice that Independence Day in the US fell on Thursday, so Happy Belated Birthday, USA.

One of my volunteer partners is a US history teacher, who asked some very pointed questions that provoked discussion on how treasonous the revolutionaries were, Not just the so-called Founding Fathers, but the Founding Mothers who stood behind them. Cokie Roberts wrote a book using their correspondence as source material. I read it a few years ago and was glad to learn of women like Deborah Read Franklin, who held things together on the home front so their husbands, sons, and brothers could help shape a nation.

After being away, the first place I stopped on the internet was of course HIStalk, where I was ecstatic to learn that Samuel Shem is at it again with “Man’s 4th Best Hospital.” I still recommend “The House of God” to all of my clinical scribes who aspire to attend medical school or physician assistant school. Although many things have changed since 1978, there are still a number that are the same.

Clinicians are still faced with rampant absurdity on a daily basis and often develop some off-the-wall coping skills in an effort to not descend into madness themselves. I thought about it yesterday when multiple patients had issues where I was forced to offer less-effective care just because of their insurance coverage. Of course, it’s always the patient’s decision to pay out of pocket for the more effective option, but seeing that choice made is a rarity. I can’t wait to see his treatment of the topic of electronic health records and the crazy world in which we are forced to operate.

I’m glad Mr. H mentioned it. Even as a HIStalk insider, I still marvel at his ability to distill the news of the day and help us keep up even after we’ve deliberately avoided the internet.

As is usual after I’ve been away, my inbox was full of messages clamoring for my attention. It’s increasingly difficult to sort the wheat from the chaff. Although I have all kinds of rules in operation, I still struggle to find the important items at times.

An educational activity on “Managing Common Summer Health Conditions” from the American Medical Association caught my attention, although I was somewhat surprised that they grouped tick-borne illnesses and sexually transmitted syphilis in the same educational session. I was shaking my head, but then I came up with a couple of snarky “Summer of Love” jokes, so maybe they do indeed belong together.

I’m working with a client right now who is trying to optimize their EHR to help them improve a variety of clinical quality metrics. Despite efforts for federal organizations to corral these measures into a meaningful cohort that is supported across multiple groups of payers, they are tracking subtly different metrics for different audiences. They’ve worked with various payer medical directors and others trying to find a resolution, but everyone seems entrenched in their own specific benchmarks. They use the excuse that they need to keep the metrics the same across all their providers, but since most of the providers in this particular metropolitan statistical area are contracted with the same payers, it just means that everyone has to suffer with a hodgepodge of requirements.

I understand where the subtle differences come from. Perhaps they see particular trends in their patient populations, or perhaps they’re chasing outcomes noted in recent literature. If it’s the latter, I was excited to see a recent article in the Journal of Internal Medicine that looks at one of the healthcare cost kings – diabetes – and how it develops in older adults, which are going to be a large segment of our patients moving forward. The Swedish National Study on Aging and Care looked at nearly 5,000 patients, following them for 12 years. Most of the older adults with pre-diabetes either remained stable or returned to a normal blood sugar range, with blood pressure and weight management contributing to the latter.

It’s unclear whether these results from Swedish patients can be translated to other populations and racial / ethnic groups. If they can, it may support a change in how we think about these patients. If the results aren’t generalizable to different populations, it may argue for a more precision approach to disease management that current EHRs haven’t even thought of. I’m pretty sure that the addition of clinical guidelines that are based on sub-populations would make many physicians’ heads explode. On the other hand, that’s right where we’re headed with precision medicine, although we don’t yet have all the systems and financial support in place to support that type of approach.

As a physician, I’d like nothing more than to be able to input factors about my patient, their family history, their genetic makeup, etc. into my EHR and have it tell me exactly what screenings they need and when they need them. As issues arise, it could also advise on whether they need aggressive treatment or conservative treatment. Right now we spend money treating some diseases that from a statistical standpoint aren’t necessarily fatal and/or don’t cause a lot of disability; but since they’re there, we feel obligated to beat them into submission. What if we could pick and choose the patients who would most benefit from treatment?

Delivering those kinds of recommendations requires a tremendous amount of data. I’m not apologizing for the patient safety issues or workflow horrors found in many EHRs. However, it does improve one’s mood to remember the reasons (other than facilitating billing and keeping up with government regulations) why EHRs might be a good thing. I’m looking forward to the day I can have a system capture my spoken office visit through a console on the wall (come on, Nuance, refine that technology for primary care already) and adaptively learn what I’m going to recommend for a patient based on my past practices. I’m eager for the arrival of seamless data interchange so that clinicians can have all of a patient’s data at their fingertips. Until then, I’ll keep plugging away with the EHR and working from the sidelines to make the technology better for providers.

What benefits of technology are most exciting to you? Leave a comment or email me.