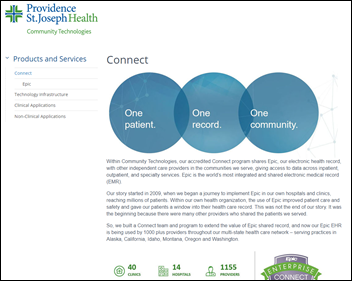 Providence St. Joseph Health plans to create a billion-dollar company from its non-clinical projects, which include the acquired Engage and Bluetree businesses (which offer Meditech and consulting services, respectively) and its Epic Community Connect hosting business.

The health system expects the company to produce 20% EBITDA by 2023. Annual revenue so far is $44 million for Engage and $15 million for the Community Connect business.

PSJH says it will replace Meditech with Epic at its acquired sites that are still using it. It also sees a business opportunity now that Epic is selling its system to health plans such as Humana.

From Gaggled Goose: “Re: gag clauses. I haven’t seen our vendor contract, but we as doctors have always been granted permission when we’ve asked to display screenshots about what we’ve done. On the other hand, I was horrified by the software-related safety risks in our CPOE rollout, and when I posted comments on an AMIA discussion board without naming the vendor, someone at the vendor became upset and I was called to the office of the hospital’s chief medical officer. I was told that if I didn’t stop making negative comments about the software that I would be viewed as a ‘disruptive physician’ under hospital bylaws and Joint Commission rules and that disciplinary action would proceed against me.” This amplifies my point that it’s nearly always health system executives rather than vendors who directly threaten clinicians who bring software problems to light. Signing a big vendor contract puts those health system executives in cahoots with their vendor counterparts in spinning every aspect of the project positively, making a contractual gag clause superfluous. Preventing harm to another health system’s patients is not a priority.

From Auspicious Date: “Re: gag clauses. Our vendor’s contract called on us to manage comments made by any and all ‘authorized users.’ Not all of those users are under our direct employ and we don’t enter into agreements that we can’t reasonably enforce or control. Further, academic medical centers deal with all walks of like with all sorts of opinions.” It’s surprising how many health systems accept vendor contract boilerplate as presented in the draft agreement, but in their defense, they don’t have much leverage when only 2-3 vendors are in play and they’ve already named their favorite. You can’t really play tough guy with Epic or Cerner in beating them up over T&C when you’ve already chosen them.

From Rama Lama: “Re: workflow automation. I’m interested in which HIStalk sponsors offer it. I’m thinking about companies like Healthfinch that offer clinician-focused automation. I’m also interested in companies that work on clinical laboratory automation (like automated reflex testing) and pharmacy robotic fill systems.” I’ll invite my sponsors that offer products in this real to add a comment to this post with your contact information.

From Aggrieved Partygoer: “Re: physician inbox. Why are automated messages sent to it?” Because non-doctors don’t trust doctors, firmly believing that everybody from lab techs to pharmacists to IT analysts need to get involved in their patient care decisions to prevent the grievous harm they think will otherwise result. It’s not doctors asking for those automated messages. I’m being slightly facetious, but the argument has two sides: (a) medical practice is too complex for a lone practitioner to always do the right thing without having an ever-prodding team of people, insurance companies, and electronic systems to provide reminders and to prevent suboptimal therapy, not to mention that processing required actions is easier for the doctor when presented as an inbox message; or (b) doctors really are careless and undereducated in some areas and will harm patients without non-physician oversight, making patient care a team sport despite doctors being trained as the star player and feeling resentment when that role is diminished. I always ponder the role of the doctor when many hospital people roll their eyes at their perceived incompetence or impure motivation. Do we want insurers and faceless hospital committees creating evidence-based guidelines that result in our doctor being constantly chided for non-conformance, or would we better off sticking with the one person who has actually spoken to us and reviewed our situation with us? The science vs. art debate is far from over.

From Yellow Submarine: “Re: Jacobus Consulting. Has closed its doors – its website gives an error.” Unverified, although the web page is indeed down. Owner Sandra Jacobs hasn’t changed her LinkedIn and the company’s LinkedIn page shows 51-200 employees. I feel bad for people who have to write grand, self-congratulatory statements about healthcare consulting firms, like this one about Jacobus: “Providing real, actionable solutions that optimize patient care and provide true value.”

From Rocket Man: “Re: HIMSS. Check this email subject line out. What do you think?” I laughed when I received my copy of the email. I doubt many people (at least those who aren’t HIMSS employees) have seen their careers rocket because of HIMSS. It’s not exactly an exclusive club.

Poll respondents would be drawn to potential new job that offers more interesting challenges and/or more money. Mario says I should have included a “I’m content to stay put option,” but I disagree – you can’t tell me that you wouldn’t bolt if someone offered you $10 million, however unlikely that may be. As the old joke goes, we’ve already established what sort of people we are, now we’re just haggling over price.

New poll to your right or here: which company’s IPO shares would you buy with your own $10,000 if forced to pick one? 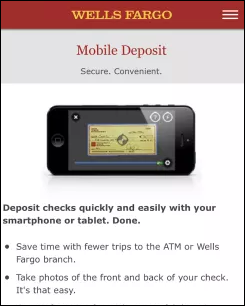 I tried something new today – I deposited a check to my bank account by taking a picture of its front and back via the bank’s app and received the deposit confirmation a few minutes later. Technology had already eliminated the need to actually visit the bank branch (other than to get something notarized or to obtain a cashier’s check) and now this deposit option eliminates most of my ATM visits since I just get cash back from stores for the rare times I need it. The possible fraudulent downside of “remote deposit capture” is that the recipient keeps the physical check and could theoretically deposit it more than once either accidentally or intentionally, which is probably why one of the checks I deposited has a checkbox to mark to prevent multiple deposits.

A State of Washington project to implement Cerner at Western State Hospital is running several years behind schedule with no completion date established. The Department of Social and Health Services has spent $21.8 million so far and has signed two Cerner contracts valued at $32 million. It is embroiled in a contract dispute with the vendor.

Berkeley Lab researchers find that running out-of-the-box machine learning algorithms on old materials science research papers “discovered” new thermoelectric materials years in advance, as the algorithm learned concepts on its own, such as the periodic table and the crystal structure of metals. The authors conclude that such analysis can establish new scientific knowledge from existing literature. 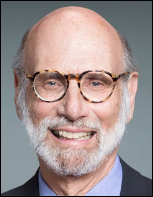 The House of God found it difficult to let some young terminal guy die without pain, in peace. Even though Putzel and the Runt had agreed to let the Man With Agonal Respirations die that night, his kidney consult, a House red-hot Slurper named Mickey who’d been a football star in college, came along, went to see the Agonal Man, roared back to us and paged the Runt STAT. Mickey was foaming at the mouth, mad as hell that his “case” was dying. I mentioned the end-stage bone cancer, and Mickey said, “Yeah, but we’ve got an eight-grand dialysis shunt in his arm and every three days the dialysis team gets all his blood numbers smack back into line perfect.” Knowing there was going to be a mess, I left. The Runt came out of the elevator, fuming, and ran down the long corridor his stethoscope swinging side to side like an elephant’s trunk. I thought of the bones in multiple myeloma: eaten away by the cancer until they’re as brittle as Rice Krispies. In a few minutes the Man With Agonal Respirations would have a cardiac arrest. If Mickey tried to pump his chest, his bones would crunch into little bitty bits. Not even Mickey, seduced into the Leggo’s philosophy of doing everything always for every patient forever, would dare call a cardiac arrest.

Mickey called a cardiac arrest. From all over the House, terns and residents stormed into the room to save the Man With Agonal Respirations from a painless peaceful death. I entered the room and saw an even bigger mess than I’d imagined: Mickey was pumping up and down on the chest and you could hear the brittle bones snap, crackle, and pop under his meaty hands: a Hindu anesthesiologist pumped oxygen at the head of the bed, looking over the mess with a compassionate disdain, perhaps thinking back to the dead beggars littering dawn in Bombay; Molly was in tears, trying to follow orders, with the Runt shouting, “Stop! Don’t resuscitate him!” and Mickey cracking and crunching and shouting, “Go all-out! Every three days his blood numbers are perfect!” 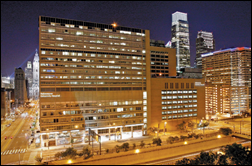 The Philadelphia paper notes the plight of the 570 medical residents of Philadelphia’s Hahnemann University Hospital, which will close in the next couple of months. The residents, some of whom just started their training last week, will have to scramble hoping to be hired on elsewhere. ACGME has invoked its Extraordinary Circumstances Policy to allow hospitals to hire Hahnemann’s residents or to increase their own resident count, but CMS pays their salaries and is the ultimate authority. Investment banker Joel Freedman bought the money-losing hospital and St. Christopher’s Hospital for Children from Tenet for $170 million in January 2018. I believe the hospitals use Cerner inpatient and Allscripts Touchworks outpatient.

Two families sue Chicago Police Department and Mercy Hospital for misidentifying a disfigured, unresponsive ICU patient who was taken off life support as authorized by two women who were were assured that the man was their brother. The patient died, but the sisters were shocked a few days later when their brother showed up for a family cookout. The brother is not happy since his disability and Social Security payments were stopped and the hospital charged his Medicaid account $1 million for the other guy’s hospitalization.

A hospital in China suspends a doctor whose wife had bragged on social media about the gifts patients give him, her family’s ability to skip the hospital line, and his “excessive medical treatment” of a taxi driver who had annoyed him.