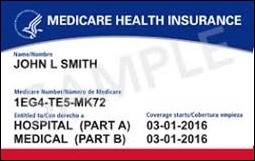 There’s been good uptake on the new Medicare cards since they began rolling out last year. Nearly 75% of claims are being submitted with the new Medicare Beneficiary Identifier as of last week. Both institutional and professional claims are at the top end of the range, with durable medical equipment vendors lagging around 64%. Our office staff has a number of word tracks they’re using to counsel patients on the need to get the new numbers on file and most of the patients seem to be aware of the transition. 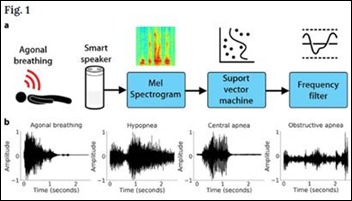 I’ve got an Echo Dot on my desk. Although I use it mostly for alarms, reminders, and shopping lists, I haven’t really explored many of Alexa’s skills or other abilities. I was curious about an article that discussed a tool to detect cardiac arrest by monitoring so-called “agonal respirations.”

This gasping-type breathing pattern is fairly common after cardiac arrest. Half of cardiac arrests occur outside the hospital and more than 90% of them die unless someone calls 911 or starts CPR. Researchers at the University of Washington School of Medicine reviewed 911 recordings from confirmed cardiac arrests and trained a machine learning model to identify appropriate respiratory patterns using Alexa, the iPhone 5s, and the Samsung Galaxy S4. The tool identified 97% of agonal breathing events from six meters away. They also used audio recordings from sleep labs and private residences to train the model on the normal range of sleep noises, resulting in a false-positive rate of 0.2%. The authors hope to use other 911 databases to further hone the tool, which might be useful not only in homes, but in elder care facilities and on hospital units that might not have intensive monitoring capabilities.

Fortune recently reported on record venture capital funding for digital health companies. The all-time record of $14.6 billion in 2018 is up from a mere $1.1 billion in 2011. I think I’m most excited about devices that will help in the virtual visit space, including home-use cameras to look at ear drums or to capture good photos of the back of a patient’s throat. I’m less excited about home EKGs, knowing that even in the office it’s sometimes difficult to obtain a good tracing. Healthcare continues to appear to many investors as a bottomless pit of money and demand even as payers try to ratchet down the expenditures. One thing is for sure, the next couple of years will not be dull.

Speaking of telehealth, reader Randy Bak had some questions about my recent experiences: “On your telemedicine foray, please update when you accumulate a run of data. My big hesitation: how much expectation is there for unnecessary prescribing (particularly of antibiotics) from patients, and more importantly, from management? Also curious how the telemedicine doctor is equipped to follow a case for a couple of days when needed, for clinical, liability, and professional satisfaction purposes.”

Since I’m relatively new to telehealth and am only a sample of one, I reached out to several colleagues who provide telehealth services to get their opinions.

The first colleague I spoke with is part of a telehealth pilot program through her employer, which is the outpatient physician organization for a large integrated health system. Their telehealth offering really doesn’t have any clinical guidelines, and since the providers are delivering services to their own practice’s panel of patients, there aren’t any specific requirements for prescribing or not prescribing. It sounds like the physicians are basically doing the work that used to be done by their triage nurses, but are charging for it as a virtual visit rather than giving it away for free.  Antibiotic usage data becomes part of their overall practice data, although she reports that patient expectations for prescriptions are high. Follow up is easy since they’re document the visits in the EHR and can always task their clinical support staff to contact the patient, or reach out to the patient directly.

The second colleague I reached out to works as an independent contractor for a nationwide telehealth group, but in a specialist capacity as a dermatologist. He spends most of his telehealth time doing virtual visits, where the patient is in the office with their primary care provider, often at a rural health clinic. It’s more of a second opinion consultation service rather than a direct-to-consumer model. Being specialized, the expectations are different than what you bring up in your question. He doesn’t believe his group is doing very much with data and doesn’t receive any clinical scorecards. Even though that’s not the flavor of telehealth you were asking about, I figured it was worth finding out. He said there isn’t much follow up.

The third person I spoke with works for a large organization that primarily markets their services to employers as an employee benefit and to payers as a way to reduce emergency department expenditures. As expected when a payer is footing the bill, the focus is on delivering the right level of care and keeping a tight leash on scope of practice issues. He receives regular clinical scorecards that include metrics such as patient satisfaction and timeliness of visits, but also on antibiotic stewardship and appropriate referrals to a higher level of care.

In hearing about some of the specific grading, I was truly impressed. The providers are coached on how to have those difficult conversations about the fact that they’re not going to give everyone a Z-pack, and it frankly sounds like they are keeping a tighter leash on inappropriate prescribing than my brick-and-mortar practice is doing. Management sounds supportive and provides clinical guidelines summarizing the evidence. Providers who want to follow up with patients have some messaging capabilities through a patient portal, but it sounds like it might not be too widely used as most of their virtual visits are for self-limited illnesses.

My personal experience is more along the lines of the latter, with encouragement to practice good evidence-based care and not to wildly prescribe antibiotics just because patients ask for them. My favorite chief complaint from my brick-and-mortar urgent care is, “I’ve got 20 people coming for Thanksgiving, I can’t possibly be sick, and Dr. X always gives me a Z-pack.” Needless to say, Dr. X was no longer employed at my organization and I wasn’t going to give antibiotics to a patient whose only symptom was a feared complaint, so I wasn’t very popular that day.

Now that there is parity in reimbursement for telehealth and face-to-face services in many states, I suspect the payers will be active in forcing telehealth providers to gather data and demonstrate their quality, or at least prove that they’re not being capricious. With many players in the market, vendors are going to be looking for ways to differentiate themselves. Additionally, as my small sample showed, there are many different varieties of telemedicine out there and direct-to-consumer is just one piece of the pie.

Have you ever badgered a physician into giving antibiotics even though you knew they didn’t want to? Leave a comment or email me.