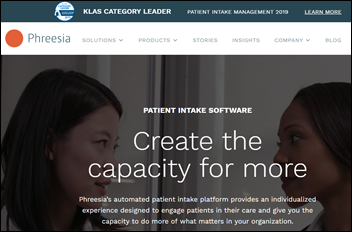 Phreesia files for a $125 million IPO, hoping to list shares on the NYSE under ticker symbol PHR.

From HISInside: “Re: Change Healthcare. Large-scale pre-IPO layoffs over the past few days. They also announced internally that they are selling the analytics business unit, including RelayHealth products.” Unverified, although reported on some of the layoff sites. Anonymous posters there attached a purported company email that said jobs were eliminated in the Software and Analytics business unit. I would be surprised if they are dealing off RelayHealth since it was the closest thing to a jewel in the McKesson HIT crown, but perhaps the potential payoff is too great to pass up.

From Max the Fax: “Re: fax machines. See this article. It’s embarrassing to be so far behind.” I’ll take your side if you show me documented proof that getting rid of fax machines improves outcomes or cost. Fax machines are an admittedly humorous example of “being behind,” but healthcare is also guilty of chasing the latest and greatest shiny objects (imaging machines, drugs, IT, architect-arousing buildings) that don’t move the health needle one bit. We need to become more critical consumers of resources of unproven value for which patients and insured consumers are forced to pay, especially given that big healthcare systems feel little competitive pressure to spend patient money wisely.

From Kabob: “Re: Slack. Wondering if you’ve used it?” I haven’t, but my curiosity has been piqued by all the pre-IPO coverage. I would be interested in hearing from anyone who has used it in a hospital setting and what benefits it provided. The most common criticism is that it sucks up time and saps creativity as users move their mental goalpost to never-ending but often pointless interaction, plus it leaves them in a social media-like dopamine frenzy to check it constantly for fearing of being one-upped while offline. Things I learned today: the name Slack came from the contrived acronym “Searchable Log of All Communication and Knowledge.” There’s a free trial for anyone interested. I played around with the free version of Microsoft Teams and wasn’t impressed. 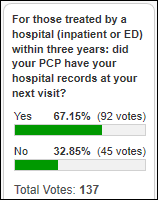 PCPs of an encouraging two-thirds of poll respondents had the records of their most recent hospital encounter at their next appointment. David says his PCP had his records and CT scans, while Monica reports that the notes, but not the x-rays, were sent to her specialist within three weeks. Peggy says her PCP had everything, while Proficient Patient and Flyonthewall said it was a snap because the hospital and PCP both use Epic.

New poll to your right or here: For those employed by others: what is the #1 reason that you don’t work for yourself? 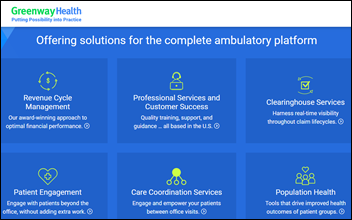 Welcome to new HIStalk Platinum Sponsor Greenway Health. The Tampa-based company offers the award-winning, cloud-based Intergy EHR/PM that delivers reduced clicks and personalized user experience; revenue cycle management solutions that decrease A/R days by an average of 32%;  practice analytics; patient engagement; care coordination; and interoperability options that include CommonWell and Greenway Exchange, a cloud-based health information network that has connected 1,400 vendor products in delivering 22 million messages per month. The company summarizes its areas of focus as: (a) delighting the caregiver; (b) inspiring practice transformation; and (c) restoring the “care” in “healthcare.” Thanks to Greenway Health for supporting HIStalk.

It’s almost July 1, when a fresh batch of scared (and scarily young) medical residents learn to answer to being called “doctor” in the hospital as they ply their chosen career for the first time, fueled by panic-induced adrenaline, low-quality but free cafeteria food, the pressure to please their attendings, and sleep deprivation. For the rest of us, it’s like a restaurant’s soft opening or a play’s first performance – you’ll be happier if you can hold off being a customer for a few weeks until routines replace reaction. 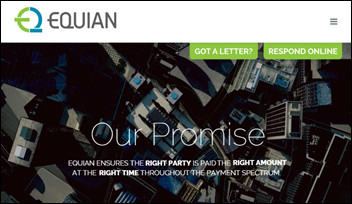 Recently retired McKesson Chairman and CEO John Hammergren will receive a $114 million one-time pension payout, $10.5 million in stock vesting, lifetime medical benefits, lifetime financial counseling, and an office and secretary for the rest of his life. The total cost the company is around $141 million. He’ll also be paid $900,000 per year as chairman of Change Healthcare. The $10,000 worth of MCK shares you bought the day Hammergren started as CEO (February 1, 2001) were worth $42,500 the day he quit, although that’s barely better performance than the Nasdaq as a whole. In addition to his parting gift, Hammergren made more than $500 million in a 13-year span with McKesson, with a record one-year compensation of $145 million. The American healthcare system and its sick patients who paid those sums have thus thanked you for your service.

Three New York City hospitals (Montefiore, Mount Sinai, and Maimonides) sell the professional liability insurance firm they own (Hospitals Insurance Company) for $650 million to The Doctors Company. The hospitals admitted in 2017 to breaking state law in failing to disclose that they, like other hospitals, had formed a Cayman Islands-based insurance company that collected premiums that were used to buy less-expensive policies, generating more than $200 million in investment income. That practice is legal as long as hospitals disclose it. The Doctors Company says it is aware of the company’s history and will rename it Healthcare Risk Advisors. Mount Sinai will spend its $325 million of the proceeds on construction, while Montefiore will use its $163 million to buy software for cost management and value-based care. 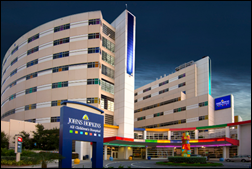 Johns Hopkins All Children’s Hospital (FL) will replace Cerner with Epic, which is used throughout Hopkins Medicine. The 15-month project will kick off on July 1. Hopkins took ownership of the 259-bed hospital in 2011, its first expansion outside of Maryland. The hospital reported $50 million in profit on $469 million in revenue in its most recent tax year.

President Trump will issue an executive order Monday that will require hospitals, doctors, and insurers to disclose their negotiated contract prices. This is great news if you are an attorney since the legal wrangling will take years before anyone sees confidential contract pricing, if indeed they ever do. 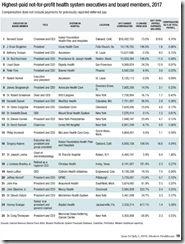 Modern Healthcare lists the 25 highest-paid executives of non-profit health systems for 2017. Topping the list is Kaiser Permanente Chairman and CEO Bernard Tyson at $16 million. The lowest guy on the list (and I say “guy” because all 25 are male) still made $5.3 million. The one that leaps out, though, is electrophysiologist Joseph Levine, MD of St. Francis Hospital (NY), whose $6.5 million payday represented 1.68% of the hospital’s entire payroll.

GoFundMe says it is running $10 million worth of campaigns by people who need help affording insulin. Why you would want to be running a drug company rather than being diabetic: a vial of insulin costs $2-6 to manufacture and you can charge 7 million Americans — who would die without using up to several vials per month – $250 or more per vial, multiples of what people in all other countries pay. Sweet.