All six former National Coordinators pledge their support for the proposed ONC/CMS interoperability rules in a Health Affairs article. They say the rules will transform information flow, spur innovation, and empower consumers. They also observe that: 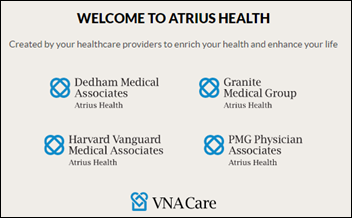 From Crown Victoria Secret: “Re: Atrius Health. Has become an allied member of The Permanente Federation.” The forwarded internal email announcement describes a vaguely defined collaboration that began on June 1 between the 715-doctor, Boston-based Atrius Health and the Federation, the leadership and consulting group for the eight Permanente Medical Groups that serve Kaiser Permanente members. The independent, non-profit Atrius has 75% of its nearly $2 billion in annual revenue tied to full-risk contracts. It just announced a $39 million profit for 2018.

From Orion’s Belt: “Re: executive coaching. What do you think of people earning a formal coaching credential and hanging out a shingle to advise executives?” I don’t know how many executives are seeking such assistance, and certainly just waving around a freshly printed certificate without a history of demonstrated personal success won’t be much of a draw (it’s a “those who can” sort of thing). I like the idea, though, and I even toyed with taking one of the (expensive and hard-marketed) certification programs not too long ago just because the courses sounded interesting. Certification requires quite a bit of hands-on training and completing a bunch of actual coaching hours that are critiqued by the person being coached, so it’s not a quick, cheap, or low-effort project, not even counting the fact that it’s all for naught if nobody hires you. 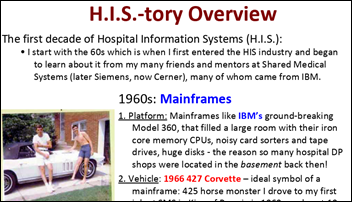 Industry long-timer and friend of HIStalk Vince Ciotti tells me that he and his partners have closed down their consulting business, HIS Pros, after 30 years. His long-running “HIS-tory” PowerPoint series on the history of the health IT industry was housed on the now-shuttered website, but Vince is sending me the files so I can post them permanently on HIStalk. The companies and people he mentions shouldn’t be forgotten and some of them offer lessons that we can learn all over again. Plus they are a heck of a lot of fun to read, especially if you’ve been around awhile. 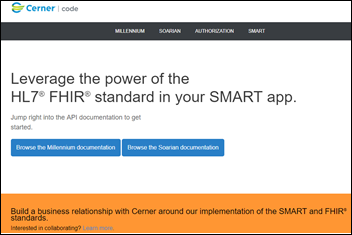 Cerner challenges developers to build apps on top of its platform that can help consumers access, understand, and use their EHR information in the 2019 version of its Code App Challenge. Winners receive a year of assistance in getting their app ready to be published on Cerner’s app store. Last year’s winner in November 2018 was a smart glasses-powered EHR navigation and documentation tool that isn’t yet listed in Cerner’s store. 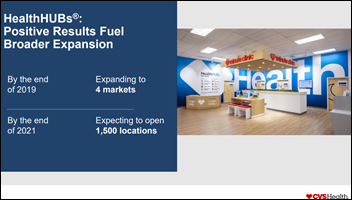 CoverMyMeds, which was acquired by McKesson for over $1 billion in early 2017, promotes David Holladay to president and Scott Gaines to COO. Co-founder and CEO Matt Scantland will leave the 1,000-employee company by the end of the year, while COO Michelle Brown will move into a different role. 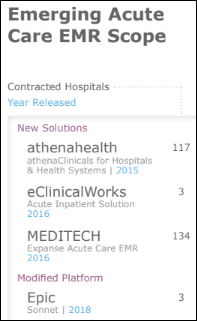 A KLAS report covering recently announced inpatient EHRs for under-200 bed hospitals finds that only Athenahealth and Meditech have brought customers live, with those vendors having signed 115+ hospitals each. Just three hospitals each have contracted for ECW’s inpatient system and Epic Sonnet. Athenahealth customers worry about significant product functionality gaps (mostly clinical) and that the company has paused sales of the inpatient product during its corporate turmoil, with 22 hospitals cancelling their contracts in the past two years. Meditech Expanse earns high marks in both administrative and clinical areas, as does the company’s cost transparency. KLAS notes that Epic Sonnet isn’t really intended for small hospitals, but rather larger ones that are willing to start off with less functionality or lower cost with plans to eventually move up to the full Epic product, with Community Connect as provided by larger hospitals (rather than Epic itself) being the only real small-hospital option. ECW is losing prospects, most of them running CPSI or Allscripts Paragon, to other vendors due to delays in bringing any sites live. The bottom line is: (a) Meditech Expanse is the only successful new product; and (b) it’s not easy for ambulatory EHR companies to develop and implement a successful inpatient product.

Glytec will expand the capabilities of its EGlycemic Management System to create Therapy Advisor, a “Software as a Medical Device” platform that supports dosing and management of all diabetes medications, not just insulin. It will give providers evidence-based recommendations on product selection that also include patient affordability.

Sacramento-based non-profit medical technology startup support group MedStart shuts down, citing a drop-off in funding, plans by UC Davis to develop a similar program in Sacramento, and failed merger talks with other organizations.

President Trump responds to a reporter’s question during a joint session with Prime Minister Theresa May by saying that any post-Brexit trade deal needs to allow US companies to sell to the National Health Service. Response was quick and unflattering from everyone from British politicians to clinicians who don’t like people, especially those from other countries, messing with NHS.

Coffey Health System (KS) will pay $250,000 to settle the federal government’s claim that it falsely attested to Meaningful Use in 2012-2013 by failing to perform a security risk analysis. The whistleblower lawsuit was filed by two people, one of whom I was able to find online as an employee of the 25-bed hospital’s compliance office.

The information of 12 million Quest Diagnostics lab patients is exposed in a breach of the systems of American Medical Collection Agency, which provides billing services to Quest contractor Optum360. 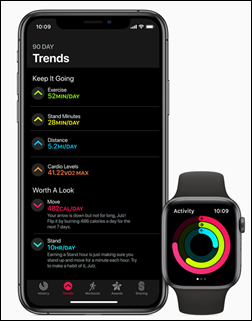 Apple makes some health-related announcements at its WWDC developer conference, most of them pertaining to Watch:

Verizon is hyping the heck out of its 5G service, with some of its questionable claims now including improving cancer treatment. The cell carriers like the opportunity to capturing market share, but 5G doesn’t seem like a silver bullet – it requires a ton of closely-spaced towers; it does nothing to bring broadband to rural areas where the cable company monopolies have stopped installing fiber and upgrading infrastructure; nobody has looked hard at what healthcare bandwidth limitations 5G expects to remove; and cell carriers (like the cable companies) provide notoriously poor user support. Eric Topol called them out for the TV commercial above, inviting them to show data proving that they improve cancer outcomes. I also winced at their use of the tired “fight” analogy.

Stanford professor and investor Phyllis Gardner is earning fame for her comments about Theranos and founder Elizabeth Holmes that were included in two documentaries about the company, some of those critical observations made long before a series of investigative reports brought the company down. She says: 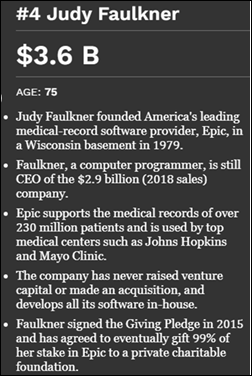 Forbes releases its list of “America’s Richest Self-Made Women,” with Epic CEO Judy Faulkner coming in fourth with an estimated net worth of $3.6 billion. Wisconsin women took two of the top four spots, with #1 being Diane Hendricks of construction material vendor ABC Supply at $7 billion. The most bizarre winner – Suzy Batiz, whose toilet spray Poo-Pourri has sold 60 million bottles in giving her a not-so-crappy net worth of $240 million, tying Reese Witherspoon.