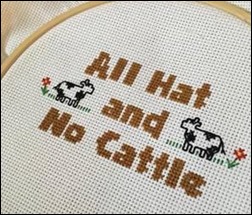 Maybe I am becoming less tolerant as I get older, but I seem to be very easily tired by people in this industry who talk a good game, but are unable to get any of their ideas to fruition. It’s especially tiresome when these folks are hired by major organizations at high salaries and they can’t seem to solve the basic problems that plague clinical technology projects.

I worked with one of these folks a year or so ago when he was hired by one of my clients as a senior vice president for clinical transformation. I had been doing clinical transformation work for them for almost a year, so I was excited that they were finally putting some leadership and visibility behind the effort other than just third-party consultants. What I immediately found, however, was that he had no experience with physician adoption or creating workable timelines. His only healthcare experience was in the finance realm, and he immediately alienated nearly everyone on the project who had been working hard for incremental change.

A lot of us asked ourselves how he was hired and came to the conclusion that the organization was looking for a social media wunderkind, someone who was an “influencer.” But it turned out he was only an influencer in his own mind. He curried favor with the physicians by agreeing with their (largely unfounded) complaints about the EHR and by offering to throw the entire project out and get the group moved over to Epic per their request.

This was during his first 30 days of employment. He didn’t bother to do the due diligence to find out that the EHR project was suffering because providers had contracts that financially rewarded them for bad behavior and refusal to use the EHR. He didn’t find out that the rest of leadership had no stomach for either changing the contracts or doing something else to change the behavior, but instead took the easiest route in condemning the vendor.

The organization is now in the throes of a significant software spend. They still have no governance, no change control, and no plan. But by golly, they’re going to be on Epic, so all their problems will be solved.

I continue to watch this individual on Twitter and am surprised he doesn’t have tendonitis in his shoulder from patting his own back so much. I still have some consulting work going on with the client, although thankfully outside of his area, and it’s been hard to watch the carnage. I wonder at times whether anyone above him has read the story about the emperor having no clothes. Most of the workers under and around him see through it, and I feel for them.

I was having flashbacks this week when I met someone at a conference who reminded me of him. He was full of great ideas about how his organization was going to use data to drive outcomes and change clinical behavior. It sounded great until it took a dark turn towards volume-based incentives. I watched others in the roundtable session nodding their heads and listening attentively and I wondered if they were missing the fact that he was talking about incentivizing providers for ordering more tests, medications, and procedures.

His independent provider organization is somewhat boutique-y and has a large population of young and middle-aged patients who value convenience. Due to their relatively low Medicare population, they’re not part of an Accountable Care Organization and they’re not worried about readmission rates. They offer a significant spectrum of cosmetic services along with all kinds of wellness testing that isn’t typically covered by insurance.

Essentially, his organization has come up with what I would consider bogus metrics, a “compassion index” that uses interventions as a proxy for good clinical care. Using point-of-care tests rather than medical knowledge or those pesky clinical decision rules raises a provider’s index. Prescribing multiple medications to treat patient symptoms also raises that index (however, over-the-counter medications that the patient might already be taking do not). He (and I assume the rest of the leadership of the organization, since the presentation was clearly bragging on their outcomes) has latched onto a word-track that “patients know we care by how much we do for them.”

I wondered for a minute if the presentation was straight out of The Onion. Certainly no one in the current healthcare environment would be talking about running up charges? As a former primary care provider, I always thought patients knew we cared by the fact that we sat down and talked with them, counseled them through their issues, and made sure they had follow-up.

I hid in the tall grass and waited for the opportunity to ask a question about what most of us would consider “real” metrics, such as antimicrobial stewardship or appropriate use criteria for advanced imaging. I asked it nicely, and it was fun to watch him blow it off saying that they don’t find those types of metrics to be relevant to their practice. You could see the light bulbs come on over a couple of the attendees’ heads because those types of actual clinical quality metrics have been so drilled into our heads, why would someone not use them?

He went on to describe some of their other metrics, which sounded more like defensive medicine than anything else. He explained their push for imaging as “patients feel better when they know beyond a doubt that nothing serious is going on,” which I immediately translated to “our accountant feels better when we radiate people.”

Nothing in medicine is “beyond a doubt” because there is great variability in patients and how their bodies react to various biological challenges. Medicine throws me curve balls all the time, including the patient last week who was very, very anticoagulated but still had a new deep venous blood clot form in his leg. Trying to use shotgun-style testing as a substitute for clinical intuition, experience, and evidence-based care is a dangerous construct.

He went on to talk about their interventions to drive clinician behavior and raise the “compassion index” alongside patient satisfaction scores. It sounds like they look for outlier physicians and sit them down and use peer pressure to try to raise the volume of order interventions. It didn’t sound like they overtly bonused physicians based on ordering volume, but instead use emotional hooks to try to keep clinicians on track. They do bonus physicians on throughput, which makes it easier for people to just order tests rather than sit down and explain a decision process to patients, since education and shared decision-making take time.

I found their bogus metric even more bogus when he explained that they judge the usage of interventions based on the documented chief complaint, not on the diagnosis. At this particular facility, the chief complaint is self-selected by the patient on a kiosk at check-in, so judging whether providers order testing based on that is particularly obnoxious. I’ve had patients who say their complaint is “throat pain” that is really poison ivy on the neck, so if a provider is going to be dinged for not ordering a strep test for throat pain that’s actually a neck rash, they’re fighting an uphill battle.

I can’t imagine working at a place like that. He did note that they have some issues with provider turnover. I’ve found that when people talk about their turnover issues, it’s kind of like talking about how much alcohol they drink – it’s likely to be underestimated.

I’m not sure how long payers are going to put up with this, or how long patients will keep coming back if they have to shoulder the bills for over-testing. Not to mention that over-testing is not a harmless intervention. Sometimes you find things that lead you to additional interventions when it would have been better if you hadn’t done the test in the first place. It falls into the “do no harm” piece of what we trained for as physicians.

I’m curious if this is a new trend or if this guy is as much on the fringe as I think. Have you seen anything like the compassion index in your area? Leave a comment or email me.