ONC finds that interoperability among office-based physicians didn’t improve a bit from 2015 to 2017 even though more doctors used information from outside sources. The percentage who sent, received, and integrated the information didn’t change and only 10% of doctors participated in all four domains.

Only 30% of doctors received an electronic summary of care record, 20% were sent ED notifications, and hospitals provided electronic patient discharge summaries to just 25% of PCPs.

Here’s a tip for ONC. Just about every hospital uses Cerner, Epic, or Meditech. The fact that some hospitals are able to do the right thing using those systems means the challenge is not a vendor or technology problem – it’s that some providers just don’t want to do it, no matter how much their patients might benefit. Think about this when you anoint these foot-dragging health systems as the official steward of everybody’s overall health. The jammed interoperability floodgates would magically open by Labor Day if their payments depended on it.

In an accompanying report, ONC also finds that only about half of people were offered access to their online medical record in 2018, unchanged from 2017. About 60% of those looked at their information at least once. Most people said they have no need to view their online record.

From AC: “Re: EHR internal timers and event log monitoring. Epic measures this. Customers should make sure they are getting an Executive Packet (Physician Well-Being section) and request access to Epic Signal. You should see if you can get Epic to interview with you on this topic or to share an overview. It might benefit their customers since not all of them take advantage of the tools available or even know about them.” I would like to hear more if someone from Epic or a client site is willing to share details. The study I cited suggests that tools like this can highlight EHR areas that could be streamlined and to quantitatively measure the impact of making system changes. It would also be interesting for an EHR vendor or its clients to compare the time and clicks required for specific functions across multiple health systems to identify best practices.

From Interview Analyzer: “Re: interviews. CEOs on occasion seem to get fresh ideas from your questions that I wonder, do they follow up with you afterward to pick your brain?” I’m pretty sure that my questions, while sometimes refreshingly off the wall or embarrassingly uninformed, have minimal business utility to someone who lives and breathes their particular niche. I attribute what you’ve read to: (a) interviewees who are being nice because they are HIStalk fans or who aren’t but hope to score flattery points; or (b) the interviewee being surprised at hearing thoughts from someone who lacks a verbal filter and who understands the race but has no horse in it. Neither party would have reason to continue the conversation offline and indeed that has never happened.

Readers recommended several folks for me to interview and that’s been fun. Let me know if you have suggestions of others who are interesting, doing good work, and confident enough to speak boldly about their area of interest. 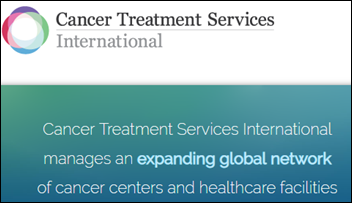 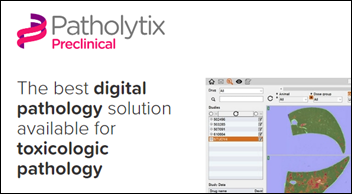 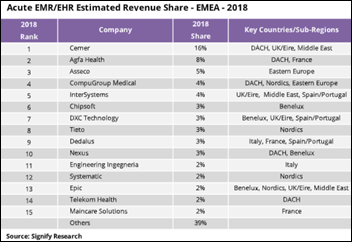 A Signify Research report finds that the EHR market in EMEA (Europe, Middle East, and Africa) is highly fragmented, with Cerner being the only vendor that holds a double-digit percentage of the region’s estimated $3.7 billion in annual spending. 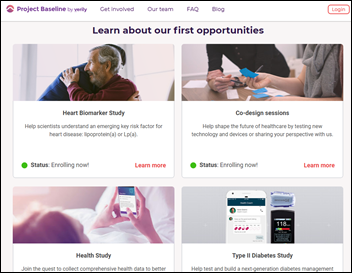 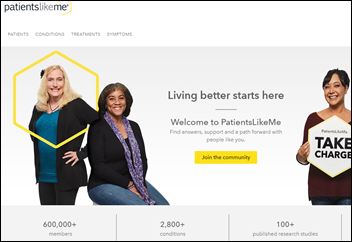 PatientsLikeMe founder Jamie Heywood expresses frustration that the federal government’s Committee on Foreign Investment is forcing the company to sell itself because its key investor is China-based genomics company ICarbonX. PatientsLikeMe is expanding beyond offering people a platform for discussing their conditions and symptoms with others with the same condition, now collecting their blood samples for AI analysis to understood more about human disease. Heywood says the government was concerned about exposing de-identified patient data to Chinese investors and insisted that the company prove that its work presented no national security risks. 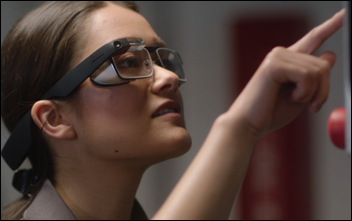 Google releases an updated enterprise edition of its much-maligned Glass, promoting the product from its Google X skunkworks division to mainstream Google. The $999 Glass won’t be sold directly to consumers – its audience is companies that want to sell their productivity-enhancing industrial software. The new version has a beefed-up processor and runs on Android with easier API integration. Google’s blog post says that Sutter Health is a development partner, which probably relates to its use of (and investment in) the Augmedix remote scribe service. 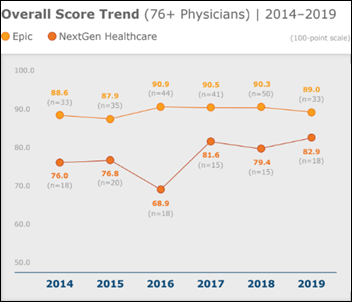 A new KLAS report on practice management systems for practices of 11 or more doctors finds considerable variation in performance even those systems have been around forever. Epic continues to lead in satisfaction by far as customers report lower A/R days and better cash flow, while NextGen Healthcare is steadily improving. Practices of 76+ doctors report growing dissatisfaction with Cerner, mostly due to the product itself, and only 40% of them expect to see improvement in the next year. Satisfaction with Athenahealth has also declined significantly as customers say the company’s changing culture has impacted product support. They also express uncertainty about the company’s merger with Virence Health. Greenway Health performed well in mid-sized practices and is improving.

The TL;DR version of why Missouri is the only state that can’t figure out how to launch a prescription drug monitoring database: (a) politics; (b) a family doctor-state senator who keeps squashing legislative efforts over privacy concerns that he somehow links to federal meddling in gun ownership; and (c) proposed bills that would have made physician use of the system mandatory. 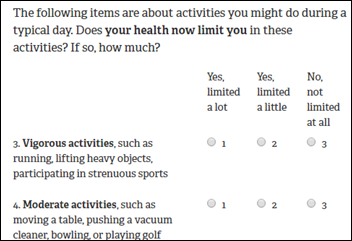 I’m a big fan of giving patients a way to communicate their self-assessed health status to clinicians via an electronic form. Patient-reported outcomes for early chemotherapy side effect detection is one example, where patients report how they’re feeling or problems they are having that can then trigger EHR alerts for quick follow-up. An oncology researcher found that cancer patients who were provided that method of feedback lived an average of five months longer than those who weren’t, which doesn’t sound all that impressive until you remember that chemo drugs that cost hundreds of thousands of dollars often can’t deliver even that modest life extension. This concept should be applied to routine encounters – why must doctors swoop into the exam room and immediately start reading an electronic or paper form for the first time to see why you are there and then ask you all over again, wasting a couple of the few minutes patients get? I can’t figure out why the SF-36 form with additional specific data collection isn’t used widely, other than (a) clinicians aren’t paid to review it; (b) providers aren’t really interested in a patient deep dive as much as cranking out billable work; and (c) providers are afraid of being sued for missing something that turned out to be important. I have never personally seen this form, or anything like it, used out there in the Wild West of healthcare’s front lines, suggesting that my providers don’t really want to open up a can of medical worms by asking how I’m doing overall except as the rhetorical question part of exam room small talk. 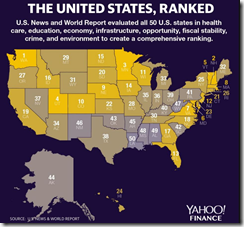 Analysis by US News & World Report finds that Washington, New Hampshire, and Minnesota are the best states overall when taking into account everything from healthcare to the economy. Dead last at #50 is Louisiana, which beat out fellow cellar-dwellers Alabama, Mississippi, West Virginia, and New Mexico. The public health implications are significant given the key role of states in driving public health, setting spending levels on social services, and creating and enforcing healthcare-related laws. You might also assume that telemedicine could be important if skilled clinicians agree with the conclusions and elect to live elsewhere. 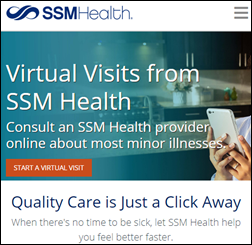 I missed this story that illustrates how healthcare price competition should work if you buy the idea that care is a commodity. SSM Health will charge just a flat $25 for a questionnaire-based, call-back virtual physician visit. It appears to be a white-labeled service from Zipnosis. I wondered where the country would get enough pharmacists when chain drug stores were popping up on every corner, so with that fear proven to be unfounded, I can now wonder whether we have enough doctors to staff telemedicine services. Probably so given puzzlingly modest adoption, although being a telemedicine doctor must be like working as an Uber driver except the money is good, you can work from home in your pajamas, and your car stays clean (note to self: patent the idea of telemedicine surge pricing). It sounds potentially dehumanizing as a doctor, however, since the only important outcomes involve volume, patient satisfaction, and not getting sued since the patients have low-acuity needs that are being addressed episodically. Maybe it will devolve into those 1980s 1-900 telephone services for sex and psychics, although the objective there was to keep callers on the line with the meter running (there’s another note to self in maximizing profit from chatty patients).

An interesting study finds that the overconfidence of wealthy people makes everybody think they are more competent than they really are, proving that “fake it until you make it” and some level of snobbishness works, especially in one-off situations such as job interviews. I’ll add an unresearched postulate – executives often think they are smarter and more insightful than everyone else just because someone put them in charge, causing them to overvalue lone-wolf instinct instead of underling-assembled facts and analysis (I wrote about this way back in 2006 in describing what I called “Man of Action Syndrome.”)