I hope EHR vendors are busily refining and provider organizations are busily implementing software that allows providers to see relative drug costs at the point of care, because we’re about to start seeing a lot more conversations around it. HHS Secretary Alex Azar announced regulations that will require pharmaceutical manufacturers to modify drug ads to include list prices if medications cost more than $35 for a one-month supply.

Since the list price often bears no resemblance to what patients actually pay for a drug because of pharmaceutical benefit manufacturer and pharmacy kickbacks, this is going to be confusing for patients. On the other hand, the price threshold might deter patients from asking physicians to prescribe everything they see on TV. The administration is apparently considering allowing US residents to import drugs from other countries under certain circumstances.

Although drug makers claim the requirement infringes on their right to free speech, Azar noted that the requirement is similar to requiring auto makers to display a standard sticker price. The top 10 most-advertised drugs have prices ranging from $488 to $16,938, which should give sticker shock to any patient who might be thinking about following the “ask your doctor” instructions. The mandate, which does not cover print or radio ads, applies to all branded (non-generic) drugs that are covered by Medicare and Medicaid.

The pharmaceutical industry spends over $4 billion annually on TV advertising. Interestingly, enforcement of the rule depends on drug makers suing each other for unfair trade practices. The regulations go into effect 60 days after being published in the Federal Register.

This comes right after the announcement that a new drug is coming to market that will sell for $2 million. The drug is for a rare muscle-wasting disease that typically kills affected individuals by the time they turn two years old. The gene therapy is produced by Novartis AG to treat spinal muscular atrophy. The manufacturer felt it could be cost effective at a price tag of between $4 million and $5 million, so the proposed $2 million pricing is a relative bargain. It’s impossible to put a price tag on the value of a child’s life, but the benefit is unachievable if none of the affected patients can afford it. Not to mention that even if insurance covers the drug, patients and families will almost surely go over their lifetime insurance benefit caps.

From Dallas Gal: “Re: your recent mentions of Fem Tech. Have you seen the NextGen Jane smart tampon platform?” I hadn’t seen it, but I’m wondering if the software company of the same name is having heart failure over the potential trademark infringement. The startup has raised more than $11 million to date. Users mail in a sample of cells collected during the menstrual cycle (which the company refers to as “a natural biopsy of the female reproductive tract”) so that they can be analyzed to determine if endometrial cells are present. The company’s font and logo color selection even mimics that of the EHR company before its last rebranding maneuver. The non-EHR product is being readied for commercial launch in 2020. I’m betting it gets a rename before that happens. 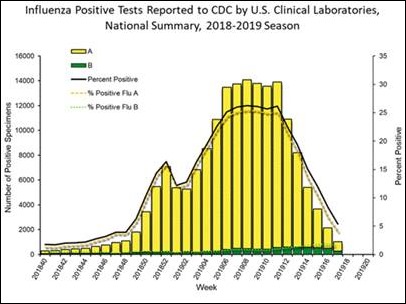 We’re finally out of the woods as far as flu season, now that it’s May. There are only three states experiencing widespread flu activity and ambulatory visits for flu-like illnesses are down to less than 2%. Even though overall activity is lower, there have been slight increases in hospitalization and an additional five pediatric deaths have been reported. I saw two patients today that I would have sworn would be positive, but they weren’t, so there is still a fair amount of influenza-like illness out there. Hang in there, clinical folks, the end is in sight.

Kaiser Health News reports on proposed regulations that would lead to the ability for patients to compare prices across hospitals and health care facilities using data sent to their smartphones. It could take several years to be able to handle the data in a patient-friendly form and it’s unclear how patients are going to be able to make sense of the craziness that is healthcare pricing.

We had a maddening encounter in the office today with a potential patient who was irate that we could not tell her the exact cost of a hypothetical urgent care visit for a hypothetical diagnoses that she had already arrived at herself. We can tell patients our charge, and we can tell them the price for cash patients without insurance, but we don’t have the ability at the point of care to see what various payers have contracted or where patients stand with regards to their deductibles. Our billing office can figure that out, but of course this patient was in the office after normal billing office hours.

The patient made a scene in the waiting room and my staff was extremely upset after the encounter. Despite doing all the right things, they couldn’t de-escalate the situation. Even the photocopier repair person who was there said the patient was out of control and offered to talk to our management to make sure the staff didn’t get in trouble.

The incident led to an interesting conversation with the staff later in the day about the commoditization of health care. My staff is representative of the average ambulatory practice staff and they have no concept of federal regulations, proposed rules, or comment periods. Since most of them are fairly young, they’ve had few experiences with the healthcare system outside of care in our practice, which waives co-pays and patient responsibility balances for employees as a benefit of employment.

Despite the feds continuing to beat the drum on transparency and portability, we’ve not been able to achieve electronic health records portability in the last decade and a half we’ve been working on it, so it will be interesting to see how long it actually takes. I’m sure at some point in the future I will look back on this post and either wonder where things continued to go wrong or be utterly surprised that we figured out how to solve the challenging problems that stand in the way.

What do you think about true price transparency? Will people really shop around for their healthcare? Leave a comment or email me.