CMS was busy this week, dropping several proposed rule changes for the 2020 fiscal year that begins in October 2019. Last Wednesday, they released a proposed rule updating Medicare payment policies for facilities that fall under the Inpatient Rehabilitation Facility (IRF) Prospective Payment System (PPS). I love their language in how they explain what they are doing: “We are proposing to update IRF PPS payment rates using the most recent data to reflect an estimated 2.5 percent increase factor (reflecting an IRF-specific market basket estimate of 3.0 percent increase factor, reduced by a 0.5 percentage point multifactor productivity adjustment.” They plan to watch the numbers to see if they can further update the market basket and multifactor productivity adjustments in the final rule.

Then on Thursday, CMS released an update for the Inpatient Psychiatric Facility (IPF) Prospective Payment System and the IPF Quality Reporting program. There are more market basket adjustments to be found, including a proposal to “rebase and revise the IPF market basket to reflect a 2016 base year from a 2012 base year.” There are days that I wish I had taken more finance classes, despite spent a lot more time in the business school than my pre-med colleagues.

If you weren’t dizzy yet after those two, Friday brought proposed changes for Skilled Nursing Facility (SNF) rates. They’re proposing a new case-mix model called the Patient Driven Payment Model (PDPM) because we couldn’t possibly have had enough acronyms. The new model considers patient condition and care needs to determine payment amounts rather than the amount of care provided. As a physician, I’d think that ideally the care needs and care provided should be equal, but I suppose that’s not always the case.

The SNF rule also includes “sub-regulatory process for ICD-10 code revisions for PDPM,” which I’m sure has everyone excited. Friday’s festivities also included a proposed rule with updates for hospice payments, continuous home care, general inpatient care, and inpatient respite care per diem payment rates. Hospices that fail to meet quality reporting requirements will be hit with a 2% penalty on the annual market basket update for the year.

This Tuesday marked the release of a proposed rule to update Medicare payment policies under the Inpatient Prospective Payment System (IPPS) and the Long-Term Care Hospital (LTCH) Prospective Payment System (PPS). The first push is for “Rethinking Rural Health,” by which Medicare plans to increase payments to so-called “low wage index” hospitals. The second set of buzzwords was “Unleashing Innovation,” which includes an increase to the new technology add-on payment when hospitals treat patients with high costs involving new technologies, such as expensive new antimicrobial therapies. As usual, CMS is accepting comments on all these proposals.

ONC was also busy with an updated draft of the Trusted Exchange Framework and Common Agreement (TEFCA) along with a Notice of Funding Opportunity for the Trusted Exchange Framework Recognized Coordinating Entity (RCE) Cooperative Agreement.  I just liked learning a new acronym since apparently I’d been ignorant of the NOFO until now. ONC also extended the public comment period for the 21st Century Cures Act proposed rule. It’s now open for an additional 30 days and comments are due June 3, 2019. 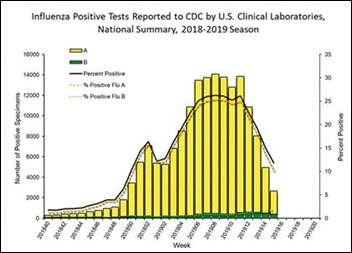 I’m extremely glad that influenza season is finally approaching its end, although we’re still close to December levels. My hospital logged only 15 positive flu tests this week, although other nasty bugs such as parainfluenza, rhinovirus, and enterovirus as still torturing people.

Although flu may be meeting its demise, the other big news around the physician lounge this week was the analysis that Medicare expects the hospital trust fund to be depleted in 2026. Social Security will exhaust its reserves by 2035, which is bad news for those of us who have many more years until retirement. Factors taking the blame include the rising number of beneficiaries as well as increase healthcare utilization (both volume and intensity). Until people understand what really happens in the hospital, we’ll continue to see tremendous (and often futile) expenditures in the last six months of life eating up the budget.

Arizona passed telehealth legislation this week, although it doesn’t go into effect until 2021. The new law adds asynchronous visits and remote patient monitoring to state guidelines for connected care and increases payer coverage for the services. Arizona needs all the help it can get since data shows it has one of the highest growth rates in the nation, but is near the bottom for access to primary care physicians. Arizona still prohibits audio-only telehealth calls, which I’d think would be more key to solving its issues than asynchronous communication.

Telehealth is potentially seen as a way to keep physicians in the workforce when they might retire or otherwise escape. There was a piece in the Washington Post a few weeks ago about when aging physicians should hang up their stethoscopes. During EHR implementations, I’ve run across many primary care physicians who should probably have called it quits long before the EHR ended up forcing them out. I don’t see that so much in the urgent care trenches, probably because the work is more physical and fast paced with more procedures than in a traditional primary care practice. I did enjoy one of the reader comments that most of the symptoms the article listed for potential cognitive decline “are the same as you see day to day from harried doctors who frankly aren’t paying attention.”

I saw three patients in the office today who had engaged in telehealth encounters, but weren’t getting better and had been told to seek in-person care. All three received telehealth services as an employee benefit. Two of the three had what I would consider appropriate care, but the third had a combination of medications prescribed that aren’t known to be effective for the condition for which they were given. Interestingly, none of them stated they received a copy of a care plan or any other written instructions, just prescriptions sent to the pharmacy. I was happy to steer them in the right direction with reassurance, a medication change, or an additional diagnosis.

What has your patient experience been with telehealth? Leave a comment of email me.