I think it remains to be seen if physicians and other healthcare leaders are ready to move from anecdotes to numbers, the concept “numbers do not lie.” I have already commented upon the conflation of quantitation, plus emotions, and also enjoyed your reference to one of our (many) limitations. Ultimately, it is my personal opinion modern society is currently seeking too many answers, placing too much hope, in so-called AI/ML. I also believe “magic” AI/ML solutions may produce serious answers, some decade. However, in (current) reality, there is simply limited data granularity access for research, in the context of an increasing number of mixed/blurred physical & electronic “threats” in major news headlines. I think some of these headlines are hype, a form of Security Theater. (Andrew M. Harrison)

We are lousy at the foundational steps, among which is rigor in the process by which we document what we do in a computer-processable way so that we can then extract from large-enough populations accurate data about the best approach to taking care of people. And right now, the EHR is such a PIA that for the foreseeable future, garbage-in is winning. As a tiny example, the average physician is far more concerned (and needs to be concerned, for practical reasons) with getting a term on the chart that gets him paid than getting a term on the chart that reflects what he wanted to say. (James E. Thompson)

Interesting thought experiment: take Epic or Cerner with their current workforce and give them five years and a billion dollars. Starting from scratch, no existing code or documentation, they could either build a new system or try to replicate their current system from their own memory.  Could they build a competing system? My answer would be very unlikely. (AC) 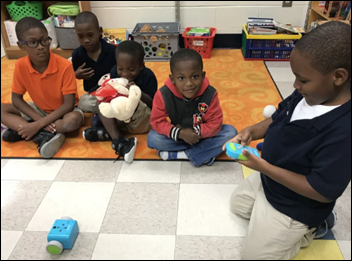 Ms. H in Georgia was happy to have her DonorsChoose teacher grant request funded by HIStalk readers, which has allowed her elementary school students to experiment with programmable robots. She says, “Where is Botley? Are we going to play with Botley? These are the questions I get at least twice a week since I introduced Botley to my students three weeks ago! Kindergartners and first graders are so excited to learn and they love how cute Botley is. They are slowly learning not only what Botley can do, but how to code so that Botley can do what they tell him to do. For students who come from economically disadvantaged areas, our students aren’t exposed to all of the things that their more advantaged peers are. Botley is able to bring a much-needed to skill to our students. What I love about Botley is that students are learning that their input can alter what Botley does. This is much like real life, in that individual actions or input can have an impact on what someone else does! Thank you again for believing in our students enough to fund this wonderful project.”

This is my kind of investigative journalism. Business Insider ponders why healthcare startups such as Oscar Health, Flatiron Health, and One Medical use similar fonts in their marketing materials. The first two companies use Tiempos (pictured above), created in 2010 for a Spanish newspaper to be easily readable on newsprint. A company designer says the font is “warm and human, without being overly cute or friendly.” One Medical’s rebrand included retooling the colors closer to British racing green and moving to a customized font called GT Super, which also has print newspaper roots. The company liked that font because sans serif fonts like Helvetica can feel robotic and impersonal. Half of me wants to declare this to be total BS and a job protection act for otherwise marginally employable marketing people, but I have to admit that I subconsciously form feelings about companies based on stuff like this, no different than reacting to a person’s appearance or manner of speaking.

Louisville-based Freedom Medical Labs, which got caught sending employees in unmarked vans to poor neighborhoods where they offered $20 to collect DNA samples along with the person’s health information, shuts down. The company blames negative publicity, but insists that its activities were legal, voluntary, and covered by the insurance of those who were testing. Several companies offer cancer genetic testing when doctors attest that it is medical necessary, and I’m guessing it’s not hard to recruit doctors if you are willing and able to pay them richly. One national company (Medvantage Consulting, above) markets the tests to people with insurance and a family cancer history and pays 15% of the $6,000 to $8,000 to anyone who brings in billable candidates. 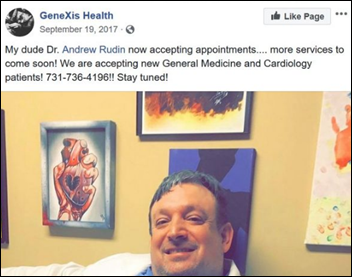 This is, unfortunately, medicine in America. DEA agents escort a handcuffed cardiologist Andrew Rudin, MD from the hospital that hired him just three months ago, he being one of the dozens of doctors that were arrested last week for opioid distribution. The charges involve his previous job in Tennessee, where he supervised (or didn’t, according to the DEA) a nurse practitioner who called himself “Rock Doc” in hoping to land a reality TV gig. He paid Rudin to supervise his practice (cosmetics, weight loss, platelet-rich plasma, and anti-aging), from which Rock Doc traded opioid prescriptions for cash and sex. The cardiologist is highly credentialed and accomplished, so it would be interesting to study the psychology that led him from developing ablation procedures to being hauled away in handcuffs.

Vancouver-based opioid specialist Mark Tyndall, MD, ScD – who sets up safe spaces where addicts can shoot up under supervision – is working with a tech company to develop a vending machine that can dispense prescribed opioids with recipients verified by a palm vein scan. He says the US response to the drug epidemic has been to ramp up arrests and border security, while Canada’s goal is harm reduction in keeping users alive instead of trying shut off their access to drugs.

Lime, one of the startups (were all the good ideas taken?) that is trying to push trendy rentable electronic scooters that seem to have high potential for disrupting both vehicular and pedestrian traffic until they are abandoned dysfunctional or broken, will add sensors that will slow the scooter down if the driver seems drunk. I don’t really get the appeal or understand why cities allow the services to operate, but if you care, Lime charges $1 to unlock a scooter via its app and then $0.15 per minute to ride while looking like an insufferable hipster who has freshly graduated from a skateboard and can’t bear to actually put one foot in front of another while staring into a phone. 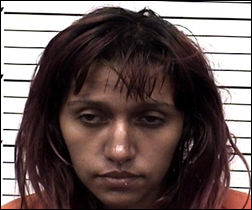 A 25-year-old woman being discharged from University of New Mexico Hospital steals an ambulance on her way out, crashes it into a pole, and then hops into the gurney in the back to pretend that she is a patient. She explained to the arresting officers that she was just looking for heroin, then claimed that the crash injured her, whereupon she once again became a UNM patient.