A private company in China is deploying medical vans to rural areas to perform exams and to test urine and blood, but it’s not a benevolent government project. Private healthcare company WeDoctor (part of technology giant Tencent) offers the service so it can collect enormous amounts of patient data that it uses to train its AI-powered diagnostic engine.

Participation isn’t optional since the government requires villagers to submit to examination. They don’t necessarily know that a private company is involved.

WeDoctor, whose valuation is several billion dollars, operates online hospitals, sells data to drug companies, and offers appointment scheduling and video visits. It is connected to 2,700 hospitals, 220,000 doctors, 15,000 pharmacies, and 27 million active users. The founder saw an opportunity to disrupt a clogged medical system in which patients wait in line for hours just to schedule an appointment or resort to buying timeslots from scalpers.

WeDoctor says it has the healthcare information of 180 million people, and while China has no laws that protect personal information, the company says it uses only de-identified patient data for its AI work.

China is gaining an edge in healthcare AI because government control allows collecting and using patient data in ways that would not be legal in most countries.

From Unilateral Disarmament: “Re: Cerner. The financial community is expressing amazement that Cerner paid so much attention to Starboard Value given the hedge fund’s low percentage ownership.” Quite a few experts are shocked that Cerner gave the Starboard Value hedge fund two seats on its board when it holds barely more than 1% of CERN shares. As one analyst said, 1% doesn’t give you much power to force change – just sell your shares if you don’t like the company’s operation, adding that two board seats usually comes only with a 5-10% position. Cerner rationalizes by saying it approved the new board members and they are well qualified (which they are), but the company did indeed capitulate quickly. They may regret that later now that they’ve invited a hedge fund into their house. Cerner also made it clear that they intentionally replaced visionary co-founder Neal Patterson (who, when healthy, would have told Starboard where to stick their ideas) with an “operator” in Brent Shafer, which sounds like a message that resonates better with a hedge fund than customers. He is an untested CEO and the whole “operational model” thing he keeps talking about sounds like something dreamed up by accountants rather than leaders, which if you are pandering to Wall Street, is probably the right thing to do. Maybe I’m just bitter in missing the competitive healthcare passion among pre-operator founders Neal, Judy, and Jonathan Bush. 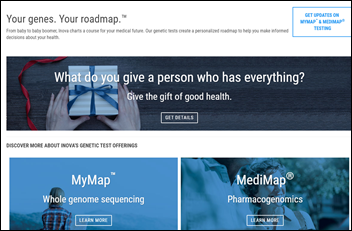 From Dudevorce: “Re: Inova Genomics. FDA warned them about illegally marketing their tests and predicting response to medications. Their MediMap web pages went down shortly afterward. Oncologist Donald “Skip” Trump, MD was hired by Inova to develop a cancer genomics program as the Inova Schar Cancer Institute. He recently disappeared from the Inova websites.” FDA issued a warning letter to Inova Genomics Laboratory on April 4, saying that its MediMap genetic tests for predicting medication response has not earned FDA’s marketing approval, also noting that the tests were being ordered by lab doctors with the results sent directly to patients without involving their own doctor. Links to the MediMap web pages now forward to Inova’s main site (I took the screen grab above from a cached copy). That other Donald Trump no longer appears under Inova’s “find a doctor” page. 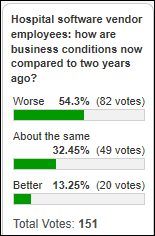 Most vendor poll respondents have seen business conditions slip in the past couple of years, whether than means reduced sales activity, provider consolidation that leads to bigger but rarer deals, or longer sales cycles.

New poll to your right or here: How much time do you spend each week reading healthcare and health IT news, online or in print, excluding social media but including peer-reviewed journals?

Listening: new from Darlingside, extremely likeable, Boston-based indie folkies who huddle around a single microphone and create amazing harmonies around thoughtful lyrics that sometimes involve a dystopian future of uncertain outcome. Perhaps I was just in the mood for it after spending extra time in bed Sunday morning reading old Rolling Stone interviews with John Lennon. You might picture him as having been bitter, cynical, and slightly wacky with regard to Yoko Ono, but only the last one is true – he was a troubled troubador who lacked confidence about his musicianship and just wanted to play 1950s American rock and roll as a guitarist who was “not technically good;” saw the Beatles through the lens of always being pressured to write songs even as he and Paul McCartney fought for album space and collaborated less and less over time; and worried about where the world was heading. It’s hard to believe how thoughtful, worldly, and searingly honest he came across even in early interviews in his 20s. You can feel his pain in this 1970 interview when he declared that the Beatles were the best rockers in Britain until Brian Epstein put them into matching suits and booked them for 20-minute shows instead of their usual 6-7 hours: “The Beatles music died then, as musicians. That’s why we never improved as musicians. We killed ourselves then to make it and that was the end of it. George and I are more inclined to say that. We always missed the club dates because that’s when we were playing music, and then later on, we became technically efficient recording artists – which was another thing – because we were competent people, and whatever media you put us in, we can produce something worthwhile.”

The Detroit business paper profiles Detroit Medical Informatics, an EHR consulting firm started in 2015 by Hass Saad, MD. He says the company is generating $4-6 million in annual revenue, has four full-time employees, and works with 300 physician consultants in serving 20 clients.

A Stat editorial compares the proposed information-sharing rules of ONC/HHS to the Protestant Reformation, where information previously accessible only to priests was made available to everyone via the newly invented printing press, but notes that the final rule could be diluted through the influence of the AHA and lobbyists who are not fans of losing Medicare money when caught hoarding patient information out of competitive spite.

It’s interesting when member organizations change their names or membership criteria to spur growth outside their original mission, such as CHIME when it weakened its membership criteria to include non-CIOs. The latest is AONE (American Organization of Nursing Executives), which in realizing that the “executives” part of its name limits its membership count, has thus decided to rename itself American Organization for Nursing Leadership. The doors have been flung open to dues-payers who are “not just defined by your title, but above all by your actions.” Someone should do a study on how much hospitals spend on dues and conference attendance whose value is primarily driven by vanity.

Imprivata explains further the Windows API flaw it commendably discovered in testing its product against new Windows updates (and which Microsoft not-so-commendably broke with a failing API with no acknowledgment to developers who rely on it). I agree that the QE team deserves acknowledgement – I’ve been loaned out to testing teams over the years and it is thankless, unbelievably complex work where 99% of the tests turn up no problems, but some weird example fails only in a particular series of steps that must be replicated and documented for fixing. Those testing teams I worked on also got no love from developers, who were more exasperated than appreciative that their bugs were caught before code was shipped, so it’s nice that Imprivata gives those folks a shout-out:

Imprivata’s core Epic user switch functionality continues to work as intended with or without the Windows API. Instead, the feature that was affected by the API deprecation was a failsafe mechanism and not core functionality. For this to be seen at a customer site, a series of unfortunate events would need to occur, and we would define it as more of an edge case. However, due to the potential it has on our customer’s clinical workflows, we felt it important enough to notify our base as soon as we discovered it. Kudos to our QE team for finding this during our qualifications!

Researchers find that cancer surgery outcomes are poorer in affiliates of top-ranked cancer hospitals that share their name. The authors conclude that hanging the big-brand cancer center’s name on the affiliate makes patients think they will receive care as good as that delivered by the mother ship, but that doesn’t actually happen. To me, the fact that a cancer hospital is a desirable brand is a troubling in itself – having worked for a hospital that affiliated with one of the big names, we talked a lot about sharing protocols and tapping the Big Cancer Center’s expertise, but I’m not sure it really made a positive difference. The health system eventually dumped the affiliation for that of another Big Cancer Hospital, which should have raised all kinds of questions about the before-and-after advantages, the cost to rent the big name, and whether patient outcomes changed as a result.