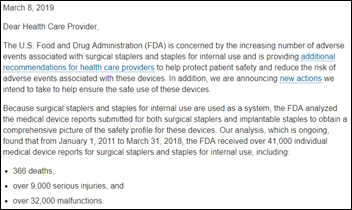 FDA has given the manufacturers of surgical staplers an exemption from publicly reporting problems to its MAUDE database of medical device failures, allowing them to hide widespread problems by submitting just 100 incidents in 2016 vs. the 10,000 that were actually reported.

Several experts, including former FDA Commissioner Rob Califf, said they’ve never heard of the program. Companies that use the option tend to keep quiet about it to prevent competitors or prescribers from finding out the true patient impact.

Among the non-reporters are manufacturers of pelvic mesh, the da Vinci surgical robot, and several critical heart devices.

FDA responded to the Kaiser Health News report by saying it will analyze the summary reports, also adding it will make public the 41,000 safety reports it has received that involved surgical staplers. Those reports included 366 deaths, 9,000 serious injuries, and 32,000 malfunctions.

It’s puzzling that FDA received so many patient safety incident reports that it decided its best action was to stop requiring them.

New poll to your right or here: for provider employees, how much time and energy does your employer devote to planning or delivering value-based care?

Columbia Surgical Specialists (WA) pays $15,000 to regain access to its data following a ransomware attack, explaining, “We received notice from the people that encrypted the files just a few hours before several patients were scheduled for surgeries, and they made it clear we would not have access to patient information until we paid a fee.”

Kaiser Permanente apologizes for one of its doctors telling a 79-year-old inpatient that he is dying via a telemedicine robot. The family says it was hard to hear what the doctor was saying due to the robot’s small speaker, but it was clear when he said, “I don’t know if he’s going to get home” due to the patient’s failing lungs. The man’s daughter recorded the incident on video thinking the family would be receiving care instructions. The patient died two days later. It sounds harsh, but I’m not so sure – not all telemedicine visits will result in good news, the provider isn’t necessarily geographically accessible to the patient, and the idea that empathy requires physical presence may need to be challenged. Or perhaps it’s unreasonable to expect skilled clinicians to be good at comforting patients or consoling their families as much as we as patients would like it. There’s probably no good way to be told – accurately, as it turns out – that you are dying.

23andMe will add type 2 diabetes risk factors to its consumer genetic screening once FDA approves the test, although the science behind it is shaky (it looks at a package of existing genetic traits rather than a specific genetic abnormality and it is known to be super inaccurate for black Americans, for example) and it has not been reviewed in the medical literature. My questions: 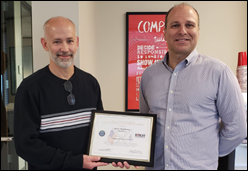