FDA Commissioner Scott Gottlieb, MD resigns, effective next month. He resignation letter did not indicate the reason for his departure from the job he has held since May 2017.

Gottlieb was a supporter of digital health technologies and modernization of FDA’s approach to regulating them. That included development of FDA’s Digital Health Software Precertification Program that allowed certified software vendors to fast-track their products to market. He also advocated using EHR data for post-market electronic safety surveillance of drugs and medical devices.

The 46-year-old Gottlieb previously worked for FDA in 2002-2003 and 2005-2007 and was a venture partner specializing in healthcare from 2007 until he was appointed FDA commissioner. 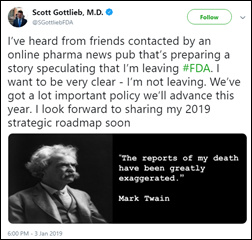 Gottlieb tweeted on January 3 that he was not leaving FDA, a denial that was apparently greatly exaggerated.

Definitive Healthcare bought the data services part of HIMSS Analytics, which collects and provides data and analytics on the healthcare provider community. The data assets and clients of this part of the business will be entirely integrated into the Definitive ecosystem, which should be massively beneficial to those clients as we combine the best of both products. HIMSS Analytics will, however, remain an ongoing concern with a renewed focus on their mission of helping healthcare providers utilize technology more effectively to drive improved patient outcomes. In essence they are providing consulting services to providers with a focus on goals that are consistent with their non-profit objectives.

From Digital Native Uprising: “Re: HIMSS. How much did it receive for its sale of the data business of HIMSS Analytics?” The number wasn’t announced and Jason Krantz from Definitive Healthcare (as I asked him the question above) was obviously not willing to provide details. Long-timers will remember that HIMSS originally bought that business from someone else whose name I’ve forgotten in 2003 and renamed it the HIMSS Solutions Toolkit. I always wonder how much HIMSS paid for acquisitions such as Healthbox and Health 2.0’s conferences, not to mention the mostly forgotten acquisitions of the rights to Disruptive Women in Healthcare, the MHealth Summit conference, the Medical Banking Project (apparently still around with HIMSS under John Casillas), Health Story Project, Microsoft Healthcare Users Group, and several other organizations that were rolled up into something bigger that no longer use their original names.

From Bohn E. Maroney: “Re: Orlando Health’s venture capital arm. Is it ethical for health systems to create or invest in for-profit businesses?” I admit that it makes me nervous when someone who is making healthcare decisions on behalf of a patient – whether it’s a hospital with private company investments, a doctor earning royalties, or the average for-profit medical practice — stands to benefit financially from ordering a particular course of therapy. I don’t think financial influence would encourage them to knowingly harm a patient, but it might sway them toward overuse, especially if the patient risk is low and their insurance company is footing the bill. That’s why we have a zillion times more diagnostic imaging machines than pure science says we need and armies of drug company reps living in mansions. We set ourselves up for disappointment in hoping that doctors and hospitals will act more nobly than the rest of society in declining to take the perfectly legal action that benefits them most. In all aspects, conscience has proven to be an ineffective deterrent to questionably ethical behavior. 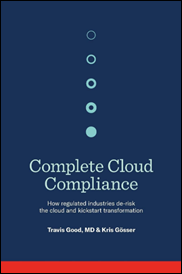 I just read this book that Datica was offering at HIMSS19 and found it to be very good, especially given my modest knowledge of the technical underpinnings, business imperatives, and legal considerations of cloud computing. The authors are Datica CEO/Chief Privacy Officer Travis Good, MD and Chief Marketing Officer Kris Gösser. It finally convinced me that cloud isn’t “someone else’s hard drive.” Coincidentally, I just read that Lyft’s IPO documents reveal that it pays $100 million per year to Amazon Web Services for cloud computing services. 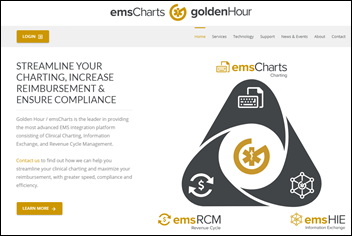 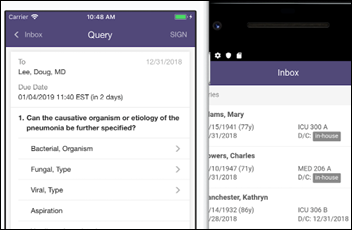 AHIMA and Artifact Health will offer templates and a mobile app for delivering compliant physician query templates, which means coders asking doctors to clarify their documentation for accuracy and maximum payment.

The Sequoia Project will hold a public forum webinar on the federal government’s proposed information blocking policies on March 19 as part of its Interoperability Matters initiative.

A smallish survey of senior healthcare leaders finds that two-third of health systems have rolled out executive dashboards to aid in decision-making, but rarely use them daily. The survey also found that healthcare systems use an average of four analytics tools, while one in six of them use 10 or more. 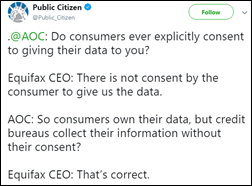 This is true of healthcare, too, where collecting and selling patient data is everywhere. In related news, Facebook gets caught for its practice of harassing users to provide their telephone number to support two-factor authentication, then immediately using that number to target ads, with the newfound twist being that Facebook allows looking up users by their telephone number with no opt-out provision. Also like healthcare, Facebook does little to correct wrongdoing until it makes headlines.

A Health Affairs article warns that “consumer-driven healthcare” is an appealing-sounding but potentially harmful health reform concept because healthcare isn’t a classic market that can be shaped by consumer actions. Patients don’t understand healthcare, they don’t choose providers based on quality and price, and their insurers don’t have enough bargaining power to drive down prices, so health reform that is based on consumerism is likely to fail. It also notes that, unlike in other markets, giving patients what they want in a “customer is always right” model can compromise provider integrity and result in patient harm. 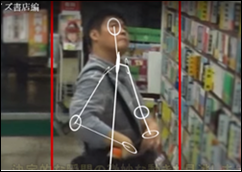 A startup in Japan develops AI-powered software for existing closed-circuit security cameras that can detect shoplifters by their suspicious body language such as fidgeting, potentially allowing employees to deter their crime by asking them if they need help. The company’s website lists possible healthcare uses, such as detecting poor physical condition, and I can see hospitals using it to identify hospital visitors who are struggling to navigate the usual consumer-unfriendly hallways, although if hospitals cared that much, they would probably address the problem rather than the symptom.

Another interesting Health Affairs article looks at how patient portals have been integrated into the care processes of four health systems: