Medsphere acquires Wellsoft and will integrate its emergency department software into a new health IT offering for urgent care centers.

From Bjorn To Be Wilde: “Re: Inova. EVP/CIO/CISO Connie Pilot has left, with Bert Reese hired as acting CIO as a national search is launched.” Unverified, but the reader forwarded an internal email announcing the change. Connie Pilot had been on the job just 3.5 years. Former Sentara SVP/CIO Bert Reese has worked for Divurgent since early 2016.

From Oldie Goodie: “Re: oldest healthcare-related blog. I’ve seen at least two that claim they were first, before HIStalk?” Beats me, but I started HIStalk in June 2003, so that’s the bar to clear.

Thanks to HIMSS for providing its most recent federal tax forms, which I’ve reviewed here. Takeaways aren’t surprising: 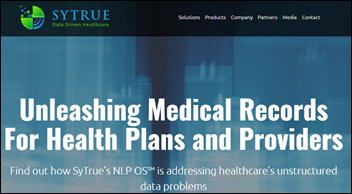 Welcome to new HIStalk Gold Sponsor SyTrue. The Chico, CA-based company uses artificial intelligence through natural language processing and machine learning to unlock insights within medical records for health plans and health systems. The company’s technology reads and understands medical terminology similar to the way a healthcare expert does, regardless of medical record format, in less than a second. Find out in less than a second which ICD-10, CPT, LOINC, SNOMED, and HCC codes are present in the same record; identify allergies or meds; and deep dive into personal history or medical necessity to turn medical records into actionable insight. Enterprise-wide semantic search allows quickly finding records with “MI without aspirin,” for example. The company asks, what’s in your medical records? Thanks to SyTrue for supporting HIStalk.

“AP Stylebook” and millions of people have illogically declared the Oxford comma (the one before the “and” in a list) as unnecessary, despite the fact that omitting it saves negligible author time and space while significantly reducing readability and clarity. Quite a few laws and legal judgments in which it was missing have been interpreted in ways that their authors probably didn’t intend, most recently when a dairy lost a $10 million lawsuit because its omission made the law’s intention unclear. Lesson learned: including the Oxford comma never has negative consequences, but it will always prevent readers from stumbling or failing to interpret the author’s meaning. Eats, shoots and leaves. 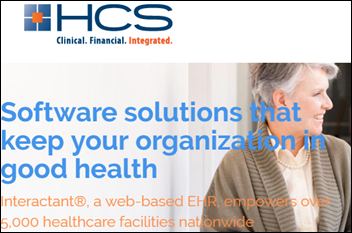 Teladoc reports Q4 results: revenue up 59 percent, EPS –$0.35 vs. –$0.76, meeting earnings expectations and beating on revenue. Shares dropped 7 percent Thursday on the news as shareholders were spooked by Q1 guidance. 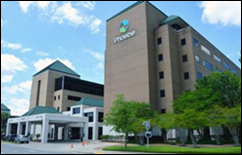 LifeBridge Health and CareFirst will hold a “Shark Tank”-like pitch challenge for digital health startups in Baltimore on June 5, featuring a prize pool of up to $50,000.

Despite a tech-heavy, long-term strategy and plans to get rid of fax machines and pagers, a new analysis reveals that 42 percent of surveyed NHS providers plan to quit or reduce their hours within the next five years. Topping their list of complaints is the NHS decision to offer virtual visits to every citizen within the next two years, a situation they believe will increase their workload.

This article digs into the increasing likelihood that foreign bad actors will use medical data gleaned from precision medicine efforts here in the US to engage in biological and cyberwarfare, or exploit individuals. “If a foreign source, especially a criminal one, has your biological information, then they might have some particular insights into what your future medical needs might be and exploit that,” says Edward You, a supervisory special agent in the FBI’s Weapons of Mass Destruction Directorate, Biological Countermeasures Unit. “What happens if you have a singular medical condition and an outside entity says they have a treatment for your condition? You could get talked into paying a huge sum of money for a treatment that ends up being bogus.”

The University of California won’t renew its journal subscriptions contract with Elsevier after the world’s largest scholarly publisher declined to make UC-contributed research articles available at no charge globally, with Elsevier instead proposing that UC authors pay publishing fees on top of its multi-million dollar subscription. UC says publishing research articles behind paywalls prevents the public from seeing the results of the work they paid for, adding that scientific journals are so expensive that no single university can afford to subscribe to them all. 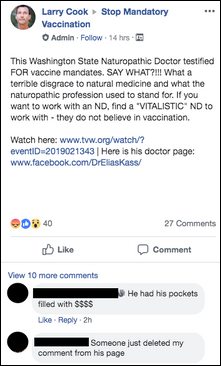 Large groups of anti-vaccination Facebook users are waging coordinated online harassment attacks against medical experts who recommend vaccination, driving down their online ratings in hopes of hurting them financially. The coordination occurs in closed Facebook groups, such as the one run by a full-time antivaxxer who urged his several hundred thousand followers to take action against a naturopath who testified in favor of vaccination to Washington’s senate. The result was predictably insulting, profane, and science-free. 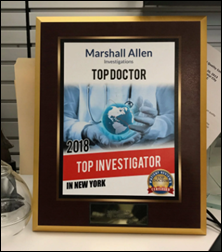 ProPublica points out the absurdity of pay-to-play professional recognitions like that offered by “Top Doctor” with a tale of how one of its journalists received an unsolicited offer to accept the honor based on bogus peer nominations and patient reviews. He claimed the prize, which came with a plaque with his chosen specialty, for a reduced rate of $289.