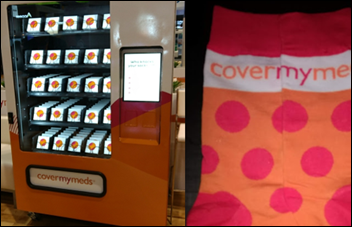 I’ve been rationing my fun socks post-HIMSS. Today was the day to show off these polka dot doozies from the amazing CoverMyMeds sock machine. I have to give them props for the best swag-dispensing system on the show floor. If you were willing to hit Twitter and follow some basic instructions, you got a great pair of socks.

I checked in on the company’s statistics. They have helped complete 128 million medication prior authorizations. More than 700,000 providers have used it and they are connected to 96 percent of pharmacies. The service remains free for providers and partners, with health plans, PBMs, and drug companies footing the bill. I don’t run across many prior authorizations for medications in the urgent care space, but if I was back in traditional practice, I think it would be a must-have.

I needed my great socks to boost my mood since I’ve been having adventures in collaborative software this week following an organization rollout of Microsoft Teams. It seems like nothing lasts for more than a year or two here and we’ve been through an entire progression of applications, from Windows Live Messenger to Skype to Slack to Yammer and now to Teams. At one point we also had HipChat in the mix, which created confusion since people were expected to collaborate on multiple platforms depending on who we were working with.

Although use of the actual Teams platform has been seamless, I’ve been struggling because since we went live I can’t use my OneDrive documents offline and no one can explain why it’s not working. I discovered this not-so-little issue when I was on a flight with no Wi-Fi service and couldn’t even edit documents, despite them being stored “on” my laptop within OneDrive. There’s a ticket open on my behalf with Microsoft, but it’s already been a couple of days and I’m not hopeful about a resolution. If anyone has seen this and has any ideas, let me know.

I was pleased to see that the HIMSS Electronic Health Record Association (EHRA) is working to make it easier for physicians to effectively use data to avoid opioid misuse. The US has a patchwork of Prescription Drug Monitoring Program (PDMP) systems by state (except for Missouri, which still can’t seem to get its act together). The systems function differently depending on state laws, which can be challenging for providers practicing on state borders. It’s also challenging for EHR developers who have to try to figure out how to create solutions that work across the country.

EHRA has put together a compendium of state-specific policies and standards, including what data is being collected and who can access it. EHRA’s Opioid Crisis Task Force has also created an “ideal minimum data set” detailing the information needed to best support clinicians who are making decisions around opioid prescriptions. The ultimate goal is to be able to create a standard for PDMP data that would be consumable by EHRs and useful to clinicians. EHRA notes that they’d like to work with ONC and other stakeholders in this effort. I agree it would give the effort some teeth since it’s often hard to herd the states in a common direction.

CMS is holding a listening session on March 5 covering the Interoperability and Patient Access Proposed Rule. Registration is open for the session, which will include opening comments by CMS Administrator Seema Verma followed by an overview of the proposed rule. Participants will also be able to submit questions and get clarifications that are needed prior to submitting formal comments to CMS.

There were other subtle differences in the data depending on the characteristics of the patient and physician populations. The authors encourage organizations that use patient satisfaction scores to drive provider compensation to look at the possible need to adjust their numbers based on patient race and ethnicity.

As physicians try to be more responsive to the cultural preferences and practices of patients, this type of research is going to be more important and brings up many questions. What defines a particular race or ethnicity? What if you are Asian but were raised by a Midwestern Caucasian family with no connection to your birth culture? What if you are Caucasian but grew up deeply immersed in the Latino community? How do you grade a physician based on true cultural competency vs. their ancestry or genetics?

The study looked at data gathered from 2010 to 2014 from a community health clinic in northern California. What would the data look like if it were gathered from a practice in another part of the country or with a different socioeconomic makeup? What about a more recent timeframe given the speed of change regarding cultural practices?

These are important factors to consider, but they aid in exposing how difficult it is to measure patient satisfaction and the various factors that might go into it. How do you control for compassion and communication when looking at clinician behavior? I’ve heard some interesting physician comments on the study, but would be curious to hear what others in the healthcare community think and also what people think as patients.

I’m waiting for the HIMSS session recordings to come out so I can finish “attending” sessions and claiming continuing medical education (CME) credits. It seemed like many of the sessions I wanted to attend were at the same time, so I’ve got some catching up to do. Despite the availability of on-demand recordings, we’re still limited to only claiming credit for one session per real-world time slot. In the age of electronic media, it would make more sense to allow participants to claim the credits that best meet their professional development needs rather than limiting them by their inability to be two places at once (which used to be reality before recordings).

I’d be fine with still capping the overall number of hours if granting too many hours is part of the concern, but I think this is one of those situations where we’ve simply added technology to an old-school process without revisiting how it might best serve the end users. For the hours to count for the CME needed for Clinical Informatics you have to also complete questions on the learning objectives so it’s not like a bunch of us are trying to game the system.