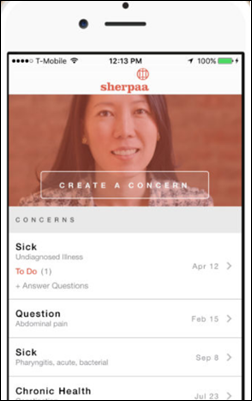 Crossover Health was founded in 2006 by Scott Shreeve, MD. He previously co-founded Medsphere with his brother Steve Shreeve and then left the company following a power struggle with the company’s board.

Crossover Health, which provides services to Silicon Valley employers and was rumored to have been a potential Apple acquisition target in 2017, has raised $114 million in funding, while Sherpaa has raised $8 million.

From Creative Loafer: “Re: BCBS of Massachusetts. Just sent this letter saying it will share information with providers to improve care – doctor visits, conditions, and treatments as required by Chapter 224 of the Acts of 2012. Wondering how this will work on the back end? Will my provider see the information in his Epic system? How will it get there? Will he not get information from self-pay visits?” I’ve inquired to BCBSMA.

I published most of the comments I received about HIMSS19 in detail. Thanks to everyone who took the time to respond. The overall themes are:

Listening: new from 25-year-old, Tony-winning actor Ben Platt, whose vocal range and emotional delivery of personal stories make his vibrato OK even though I don’t usually like it.

It’s usually pretty quiet in the first couple of weeks after the HIMSS conference, so I was surprised to see that I had over 8,000 page views in 6,300 unique visits on Monday, similar numbers to all but one day during HIMSS19 (Thursday of that week had nearly 11,000 page views).

I was thinking about the patient engagement comments from my HIMSS19 survey. Vendors and providers might be creating solutions that focus on hospital and practice benefits rather than those of patients, giving little incentive for using them. Maybe patients don’t really want to see revenue-maximizing, spam-like reminders that are as impersonal as their actual provider visits. My thoughts:

Children’s Hospital of Philadelphia Foundation will make a $741 million profit from the gene therapy spinoff it created in 2013, which will be acquired by drug maker Roche for $4.8 billion. The company’s blindness treatment drug costs $425,000 per eye and will generate $76 million in revenue this year, while a hemophilia treatment it developed has not yet reached the market.

In Canada, Bluewater Health will replace its 20-year-old Meditech system with Cerner, joining several other hospitals in the region that will implement Cerner.

John Douglass is named executive board chair of smart infusion pump and software vendor Ivenix. He was a co-founder of Sentillion and president of Capsule.

KLAS looks at how well vendors share genuinely usable data — especially in light of the Carequality-CommonWell connection – with particular attention to contextual information such as notes and lab results. Leading the pack is Epic, which brings in problem lists, allergies, medications, and immunization history from any EHR and automatically ingests notes and lab results (automatically from other Epic sites, with configuration required for other sources). Cerner is #2 in allowing users to choose which documents they want to bring in for summarization in the chart. Both Epic and Cerner allow accessing outside data via a search bar to prevent users from manually managing CCDs. KLAS found no Greenway Health customers that are using outside data, while CPSI users must manually reconcile every data element, including manually matching patients. The report notes that Epic sends a separate CCD for each encounter, which makes it easier for non-Epic sites to automate data consumption, but that practice may surprise vendors or users who are expecting a summary CCD only. 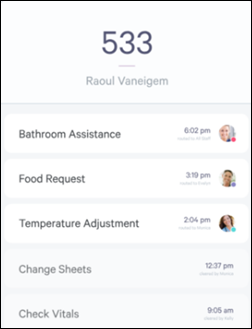 Cedars-Sinai will outfit 100 patient rooms with Amazon Echo Dot units running Aiva Health’s Alexa-powered patient care assistant, which routes the verbal requests of patients to the appropriate caregiver. It also allows them to control their TV or to play content such as music. Cedars-Sinai is an investor in the company, which graduated from its accelerator. 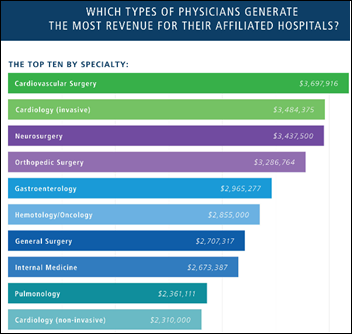 A survey of hospital CFOs finds that physicians generate an average of $2.4 million each in net revenue to hospitals with which they are affiliated.

ONC will offer a webinar on Thursday, February 28 to review HHS’s proposed interoperability rule. it will be recorded and offered for playback afterward. I hope they sprang for the high-capacity GoToWebinar subscription.

I hesitate to mention this just-published research paper since it uses observational data and surveys from Brigham & Women’s that were collected in May 2015 (an explanation should be interesting, especially since it finally ran in an open-access journal) and the hospital had just gone live with Epic back then, but here it is. Clinicians used Epic differently during morning rounds, as follows:

Google Translate can translate ED discharge instructions into Spanish and Chinese with high accuracy, a study finds, but still isn’t good enough for handing out the result without a warning that the translation isn’t perfect. The authors suggest that clinicians use Translate to provide an on-the-fly translation of verbal instructions and only for instructions that don’t contain complex grammar and medical jargon. The authors did not assess the actual readability of the result or compare the output to that of human translators. They also suggested giving patients the English version anyway so English-speaking family members can compare them to the translated version.

Apple is testing sleep tracking for its Apple Watch, although fitness tracker competitors already offer that feature and its acquired Beddit product already measures sleep via a mattress sensor. Such use would require developing Watch batteries that can run longer between charges, a feature also already offered by fitness trackers. 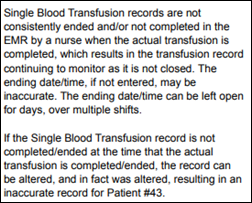 A CMS investigation of Baylor St. Luke’s Medical Center (TX) finds that employees mislabeled blood 122 times in four months, with the hospital taking no documented action in response to their expressed concerns about blood specimen handling. A patient died after the wrong blood type was transfused.

More than half of home care clinicians say they don’t have access to the EHR information of referring hospitals or clinics, making it hard to sort out the 90+ percent of records that contain medication list discrepancies.

This is depressing (no pun intended). Fifteen thousand low-paid Facebook contractors who review potentially inappropriate content experience panic attacks, PTSD symptoms, and depression from seeing the horrific material users have posted, resorting to on-the-job drug use and indiscriminate sex in hoping to forget on-screen murders, graphic pornography, bizarre conspiracy theories that eventually seem plausible, and hate speech. The whip-cracking, call center-like working conditions are depressing enough, but even more is the fact that Facebook users – some of them likely to be your neighbor, co-worker, or relative — are posting so much vile content that armies of moderators can’t keep up.