From the investor call: 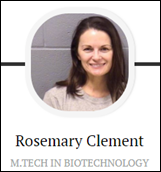 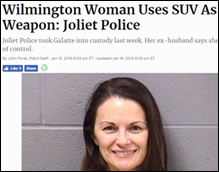 From Clippy: “Re: site. You love sites deceptively pretending to be American that clearly are not. Here is one you may have missed.” Thanks, it’s a gem – reading Healthcare Herald’s attempts to explain medical and technology issues in its comically fractured English (obviously written by folks whose origins lie in India) makes it a must-read for all the wrong reasons. The “Our Team” page lists several fake employees with their credentials. The photo of the chief content writer was lifted from news story, while that of her PhD co-editor is a widely used stock art JPG that they didn’t even bother to rename from “mature model man.” But the write-ups are pure poetry – the editor’s bio says, “I have been working in this company for seven long years. Since my day of joining till now, I have seen the company going through many thorns and pebbles.” The “About Us” proclaims, “The field of healthcare is also not an exception. There has been mass upgradation in this sector. Thorough research and in-depth studies have made it possible to even fight with disastrous chronic diseases. There is large-scale use of Artificial Intelligence and IoT in treatments which make it easier and more comfortable and hence also quite useful in most of the cases.” I like the word “upgradation,” which experts say is used only by India-based outsourced technologists, so I will try to work that into casual conversation, such as asking a server, “May I request an upgradation to the Caesar salad?”

From Bone Apatit: “Re: HIMSS19. I am questioning the value.” I’ll recap what my survey respondents said soon, but my working thesis is this. Some people obviously want to spend a week away from work socializing, attending parties, and feeling important, so they at least fool themselves into thinking that their employer benefits so they can keep coming back. Others, especially vendor employees, attend because their employer requires them to, thinking that sales will result. Still others say they receive actual value, most likely in meeting with their vendors and fellow customers rather than sitting in educational sessions. HIMSS justifiably assumes that a heavy registration count (growing, at least until the last couple of years) is evidence that they don’t need to change much, especially in the exhibit hall that drives the entire trade show. Complaining after attending doesn’t reverse your already-cast vote for the status quo – you would have to do that by skipping HIMSS20. 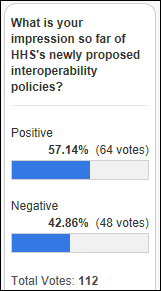 A majority of poll respondents like the draft of the federal government’s new interoperability policies. Recovering CIO says they will end up being toothless, however, unless the feds are willing to de-certify non-compliant EHRs and to eliminate the existing economic incentives for hoarding patient data. Nick says it’s an incremental first step,  especially the part that would prevent providers for charging to deliver care and then charging the patient again to provide a record of that care. George is happy that the proposed rules are patient-focused, force payers to the table, and include post-acute care.

New poll to your right or here: have you sent or received information via fax in the past year?

I rented “Bohemian Rhapsody” this weekend, and Oscar recognition aside, it failed to meet my low expectations. It’s a shame that Freddy Mercury’s extraordinary life, his unfortunate death, and Queen’s musical contributions were dumbed down to a sing-along cartoon in which nearly every important detail was either fictionalized or omitted, especially since dim moviegoers will think they have seen an authoritative, objective documentary.

A judge approves a plan that will take $92,000 from the assets of two closed Arizona hospitals for a 90-day reactivation of their EHR so that patients can get their medical records.

UConn Health says that an unauthorized third party access employee email accounts in December 2018, some of which contained patient information, potentially compromising the information of 326,000 people.

In Japan, an alternative healing group that urged its followers to avoid vaccinations apologizes and recommends that its members adhere to normal vaccination schedules after nearly all of the 49 new cases of measles that were reported in one area involved its unvaccinated members.

Mount Carmel Health System (OH) – where 35 patients received pain medication overdoses under the care of a since-fired ICU intensivist – says five of those patients who died could have lived with proper treatment. The hospital has set maximum pain medication doses in its EHR, implemented an escalation polity for orders that do not follow approved protocols, restricted the ability to bypass pharmacy order review, and increased clinician education. 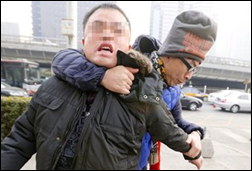 This is good technology on top of bad policy. In China, Beijing hospitals are using facial recognition technology to identify known scalpers who make hard-to-get outpatient clinic appointments, then sell their tickets to others at inflated prices. The government says it will take legal action against the scalpers, including banning them from high-speed trains. The guy above was arrested for scalping an appointment for Beijing Children’s Hospital during winter vacation, when more parents bring their children for treatment.