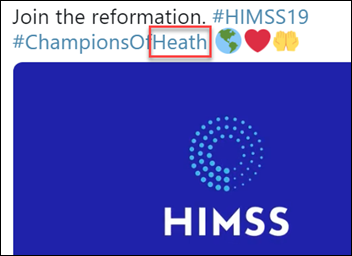 HIMSS gives a preview of the “evolution of the HIMSS Brand” (marketing-speak for “we had a new logo drawn up whose deep meaning requires 10 pages to explain.)” Meanwhile, the HIMSS social media folks are apparently fans of “The Dark Knight” or toffee candy bars.

The explainer video talks a lot about “re-imagining” and “reforming” the ecosystem. It also notes “member-driven impartiality,” which is as interesting as it is vague. It ends with a sinister-sounding call to “join the reformation,” which I think is really just a membership pitch.

I am impressed that the HIMSS marketing VP in charge of this project, Terri Sanders, has a long healthcare background (not all in marketing) and an MPH. Quibbles aside, I expect she will do a good job.

A couple of readers have emailed me to express their frustration that HIMSS ignored my request for their IRS Form 990 financial disclosure (which as a non-profit they are required by law to provide), so I’ve emailed the HIMSS media contact, Karen Groppe, with another request. UPDATE: Karen emailed me almost immediately, which is admirable given that we’ve just come off the most hectic week for HIMSS – my previous inquiry had apparently gone astray in Etherland. She will get me the forms. I pointed out that old versions are on Guidestar, but nothing for the previous two years that should have been filed by now. I appreciate the quick response. 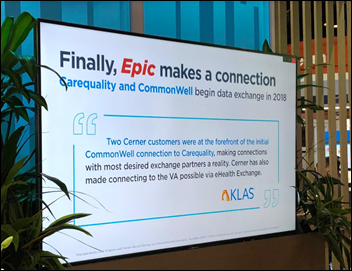 From Rounding Error: “Re: Cerner’s HIMSS19 slide bashing Epic over CommonWell. Carequality was exchanging 11.5 million records per month when the CommonWell connection went live in July 2018. It hasn’t changed much since even though a dozen CommonWell sites have gone live in the last seven months. I suspect CommonWell doesn’t have many members live or those members aren’t exchanging much data, while Carequality has 1,250 hospitals, 35,000 clinics, and 600,000 care providers. It’s kind of lame of Cerner to say that Epic is the laggard. No wonder the government is stepping in.” I was surprised that Cerner has become either more aggressive or more desperate in calling out competitors by name, which it has never done.

From Over the Shoulder: “Re: this tweet featuring a selfie of one of the Twitterati. Notice anything unusual? Hint: it was taken by a third person as the tweet-prolific subject pretended not to notice!” I thought that was odd, too, as was his inclusion of the twitter ID of a PR firm that seems to specialize in pushing vendor thought leadership. Digging further, he’s apparently shilling for the PR company, creating video commercials for their customers right in the exhibit hall. Hopefully all those folks who were unashamedly cashing in on their questionable fame at HIMSS19 won’t need their credibility back now that they’ve sold it.

From DrJVan: “Re: HIMSS19. Kudos on your coverage. Did Allscripts use this year’s gathering to introduce the industry to their AI product, Avenel? It has been over a year now since they announced this product. Was it displayed or mentioned?” I didn’t visit the Allscripts booth, I didn’t hear anything about Avenel, and Avenel wasn’t mentioned in the Allscripts tweets. I’ll invite readers to comment.

It’s a typically quiet post-HIMSS conference period since everyone (even the federal government) blasted out their big news last week. I expect a refractory period this week as everybody gets back to their real jobs, after which the news will return at a pre-summer level. It’s nice that we have nearly 13 months before doing last week all over in Orlando again at HIMSS20. 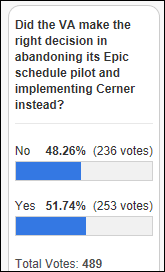 It’s nearly an even poll respondent split on whether the VA made the right choice in ending its Epic patient scheduling pilot and plan a replacement with the Cerner offering. King Solomon provided a wise comment as a former Epic Cadence application analyst, saying Epic’s product is awesome at scheduling and can handle complex rules, but that the single-system argument should prevail.

New poll to your right or here: What is your impression so far of HHS’s newly proposed interoperability policies? Vote and then click the poll’s Comments link to explain. 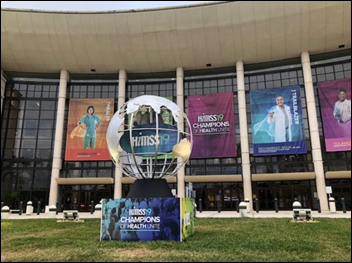 I’m still struggling to think of something conclusively profound to say about HIMSS19, but I’m beginning to lock into an overview along these lines: 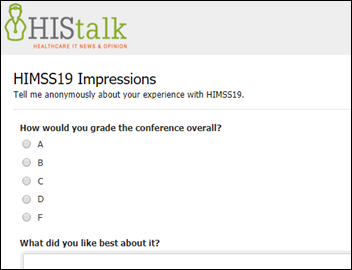 Along those lines, I would enjoy hearing an exhibitors narrative on the conference – setup day pains, good and bad visitor behavior, company expectations, and shoe tips for the zillion steps per day you took. I’ll keep you anonymous, so you can be honest. Send something my way and don’t worry about polishing it up since I will do that. 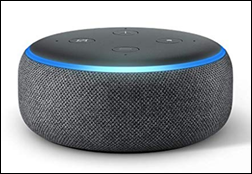 I’ve worked from a 15-inch laptop all week, so my first impression upon re-docking at home is that my desk monitor was the size of a theater screen. I’m also enjoying playing with the Amazon Echo Dot that I won by scoring 10 of 10 on WellSky’s trivia quiz at HIMSS19 – it’s similar to my Google Home Mini with good sound for a small gadget, but the setup was easier with the Dot, it’s easy to find new skills in the Alexa library, it plays Spotify and Pandora well, and it can connect to a Bluetooth speaker. It costs about the same as the Mini at $50. Either device is worth it just for setting cooking timers and reading the weather forecast.

I enjoyed the HIMSS19 write-up of Garen Sarafian, who is surprisingly astute and patient-focused as a money guy. He concludes that HIMSS is out of touch in choosing its dopey “Champions of Health Unite” theme that has little to do with actual health or its champions (who are likely caring for patients episodically instead of juggling Orlando party schedules). Like me, he is struggling to detect any overall HIMSS19 theme, although he notes that population health management didn’t get much airplay and health systems aren’t all that interested in exchanging information outside their walls (and thus forced the need for the federal government to provide a push). 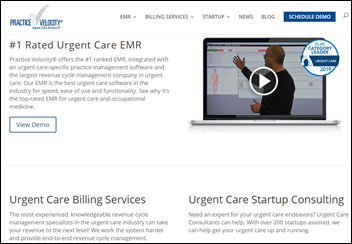 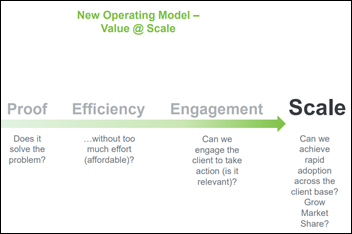 Cerner’s investor presentation from HIMSS19 (worth a look in its entirety if you follow Cerner) included Brent Shafer’s “new operating model,” with these comments standing out:

CPSI makes its EHR information available to patients via Apple Health Records on the IPhone.

FDA warns McKesson over incidents where the company failed to take action after finding that one of its employees replaced opioid tablets with some other product, with McKesson doing nothing to warn other customers to check packages of the same lot number.

A hospital in the Netherlands confirms that students who work part-time there were inadvertently given the ability to view the complete electronic medical records of all patients, caused by incorrect software settings.

Some Twitter fluke kept recommending #HIMMS19 as a hashtag, creating a ton of tweets going out under a misspelled HIMSS.

Rapidly improving photo and video manipulation tools capable of “deepfaking” (like the AI-generated portrait above) will threaten democracy, justice, and commerce since you can no longer tell if what you are seeing on Facebook or anywhere else is real. Check out this AI-powered site to see how easily technology can create believable images out of thin air. We need some kind of digital certificate that verifies that photos and videos were taken with unaltered cameras and have not been changed by even one pixel (some kind of hashed signature embedded as a watermark, maybe?) 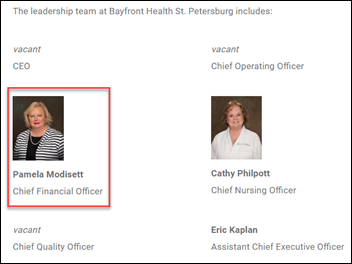 The busiest webmaster in the industry must work at for-profit, CHS-owned Bayfront Health St. Petersburg, which keeps removing executives from its leadership page. He or she is behind, however, as the CFO just quit, joining other recent departees. I notice that the guy at the lower right moved to an assistant CEO job after two years as a performance improvement intern, his first job other than marina manager and a football skybox attendant (although to his credit he did earn an MHA).

Beverly Hospital (MA) admits to the state’s Department of Public Health that a former pharmacy technician stole 18,000 pills – most of them opioids – by marking them as outdated in Pyxis and then either using them or selling them. The hospital finally caught her a year after the thefts began, blaming the delay on a former pharmacy operations director who it says wasn’t reviewing the Pyxis reports. 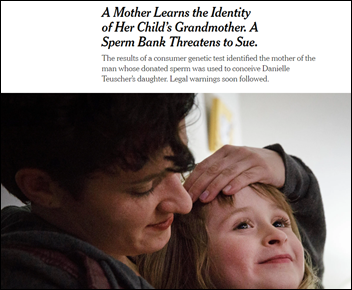 A sperm bank sends a cease-and-desist letter to a female customer whose daughter was conceived using sperm the woman bought from the sperm bank. The woman had her five-year-old daughter’s DNA tested by 23andMe, which identified another 23andMe customer as the child’s grandmother. The woman thought it “was a cool thing” to contact the grandmother to say she would be open to contact from her son the donor, forgetting that the the sperm bank’s terms prohibit such contact until the child is 18 and only then through the sperm bank rather than directly. The sperm bank threatened her with a $20,000 penalty and said it could withhold the remaining four vials of sperm it was holding for her, also reminding her that she’s not allowed to seek the identity of the donor through DNA testing or online facial recognition tools.

A woman’s cancer treatment is delayed after the copies of her CT scan she had overnighted to her clinical trials team never made it – the mailbox place’s owner was in foreclosure and took off.