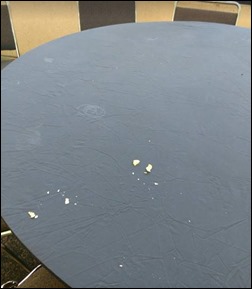 There was a shuttle immediately available at my hotel today, so I took it, figuring I’d give my feet a rest before hitting the show floor. It delivered me a bit before the doors opened but when I looked to find a place to sit, all the tables were covered with food and trash that based, on its content, was from yesterday. For as much as this conference costs, the tables could be wiped off overnight.

People always ask me what is the best thing I saw in the hall on any given day, and this is the one. A good friend clued me in to WEconnect Health Management, which was over in the 888 booths. They’re using smartphones to engage patients along the addiction recovery process, delivering positive reinforcement in the palm of your hand. Families and providers can track compliance with care plans and patients who engage with their treatment plan can earn loyalty rewards. Founder and former professional tennis player Murphy Jensen was in the booth. Their content is evidence-based and they use a risk score algorithm to identify risk of relapse before it happens, so the care team and supporters can intervene. This is one of those solutions that I’m excited enough about to actually go home and try to get some of my colleagues to engage with it. My practice provides medical coverage for a residential treatment center and I think they’re going to be really excited about this company. A lot of people don’t spend any time in the small booth areas, but there are some gems for sure. 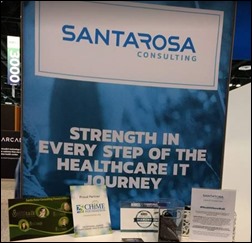 So did Santa Rosa Consulting.

I continued my quest to learn more about telehealth with a stop by InTouch Health. They’ve got a slick platform that’s geared to hospitals and health systems with offerings that span from stroke management to cardiology to ICU monitoring and beyond. The booth reps were friendly and knowledgeable and worked to get me the demo I wanted without making me feel like I was waiting. They have some impressive data on their network and connectivity stats that I hadn’t heard from other vendors I visited with this week. 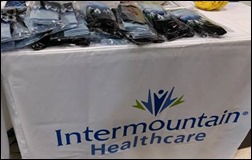 Intermountain Healthcare had awesome socks with air ambulances on them and were happy to give me a pair just for the asking. 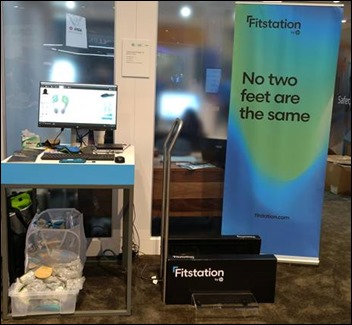 I was looking for 3D printing at the Hewlett Packard booth and spent some time talking to their team about Fitstation. It’s a device that performs a volumetric scan of the feet and collects data to enable 3D printing of custom orthotics at a fraction of the cost of traditional devices. The team was engaging and very enthusiastic about their product even though this isn’t a high-traffic show for them. They also happily added to my sock collection, supplying both running socks and fashion socks.

I ran into an old friend at Optum – reconnecting with people is really my favorite part of HIMSS (other than getting the required LLSA Continuing Education hours for my Clinical Informatics board certification). Some of the folks I happened across were people that I’ve walked through fire with (at least as far as EHR implementations go) and even though we hadn’t seen each other in years, it was as if had just seen each other yesterday. Several of them were job hunting, and knowing the caliber of people they are, it’s a loss for the employers they’re trying to leave. People are tired of being at risk for being reorganized, downsized, or streamlined and the good ones jump when they can.

Some of the reps were getting more aggressive today. One vendor’s team was halfway across the main aisle soliciting people to come to their booth. I’m pretty sure that’s some kind of violation of the HIMSS rules of engagement, and this particular rep wouldn’t take no for an answer. Once someone indicates they’re not interested, you’re not likely to convert them. Perhaps some additional sales education is in order.

Orchestrate Healthcare had their “booth babes” in short skirts again today. The putting green is such an overdone booth attraction and frankly I would take the company more seriously if they put the green attendants in funky golf pants or even just khakis. The skirts they were wearing were too short to pass the dress code at the last course I played and at least four inches shorter than the one golf skirt I own. 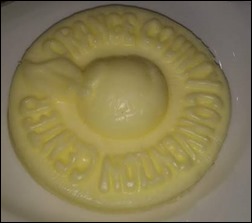 I attended a lunch that featured FirstNet, powered by AT&T. Having spent some time in the emergency room trenches as well as volunteering with a rural fire department, I was interested to hear about their efforts to build an ultra-reliable wireless network for first responders. The lead presenter had one of their hardened smartphones and literally threw it across the room for attendees to see how rugged it was. It has an insane amount of battery life and can survive submersion and a drop from a seven-story building. One of the company’s goals is to deploy the network to 99 percent of the US population within five years and they’re running a year ahead of schedule, which is impressive. They’re creating a public safety app store where downloads will be fully vetted and guaranteed to have no back-end data capture. The network is used not only for disasters, but to enable ambulance teams to communicate reliably with emergency department medical control officers. They had a great use case of having a physician look at an EKG from the field and reroute the patient from the emergency department directly to the cardiac cath lab. The Orange County Convention Center butter pats were a nice touch. 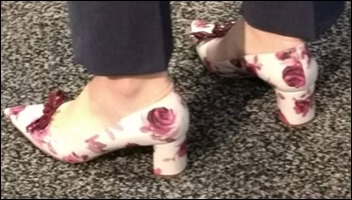 There were plenty of good shoes to be seen, although I wasn’t able to capture all of them. Props to the woman in the blue embroidered gaucho boots — they were amazing. There were also some memorable thigh-high boots on the floor today along with these numbers. I feel like a creeper taking the pictures at times, so I apologize if anyone was offended. 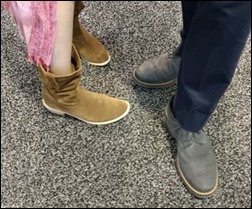 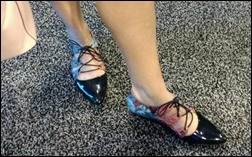 The Colorado HIMSS contingent was ready for action. I spotted them at the Intelligent Medical Objects (IMO) booth where champagne and prosecco were being served in honor of Valentine’s Day. 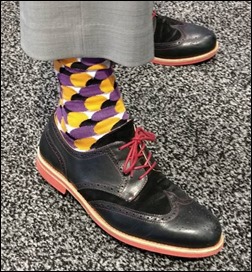 As was Dr. Nick van Terhyden. My own Valentine’s Day socks paled in comparison. 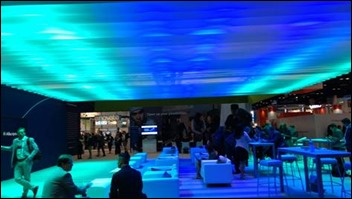 The Allscripts booth had the tagline “Open up your possibilities,” but I found the booth oddly claustrophobic with its lowered illuminated ceiling.

A CIO friend told me about Nuance’s new offering that promises “clinical documentation that writes itself.” I am excited about what they have to offer – it’s Dragon-powered virtual scribe technology that links up with EHR documentation. The demo was slick and well prepared, although it’s hard for me to enjoy demos because my brain always gets sidelined by the super-simplified clinical content. They’re going to begin deploying to a subset of specialties soon, although I suspect it might be a while before they get to primary care. If they’re looking for a physician to continue to kick its tires and see if she can stump the dragon, I know where they can find someone.

I mentioned this empty booth the other day. HIMSS filled it with tables and chairs, providing a much-needed place for weary travelers to rest their feet.

The Howard Med Technology Solutions booth featured a diner offering ice cream, sodas, and Moon Pies. The staff was welcoming and happy to give refreshments to anyone who asked.

I’ve heard a lot of negative feedback about other vendors this week who weren’t willing to give out their swag, even when asked nicely. I experienced it myself, when one booth’s staff handed me off to three separate people before someone would finally agree to negotiate with me about some socks. Another vendor was only giving out their socks to people who fit a specific sales profile. If that’s your situation, then don’t put them out on the counter and instead keep them hidden for the right person to stop by.

If you have stuffed animals and someone specifically asks you for one to take home to a child, humor them. If you’re in a booth, you’re likely a road warrior yourself, and someday you might know what it’s like to surprise a kiddo with a cool animal that will be meaningful to them during a week where mom or dad was away. Typically on the last day of HIMSS people are a bit more free with their swag because they don’t want to send it home, but apparently not everyone thinks that way.

That’s a wrap on HIMSS19. I’m hanging out at the airport enjoying the free MCO Wi-Fi. Safe travels to everyone who is still at the show. I’ve never attended a closing keynote, so if you want to share your impressions, leave a comment or email me.